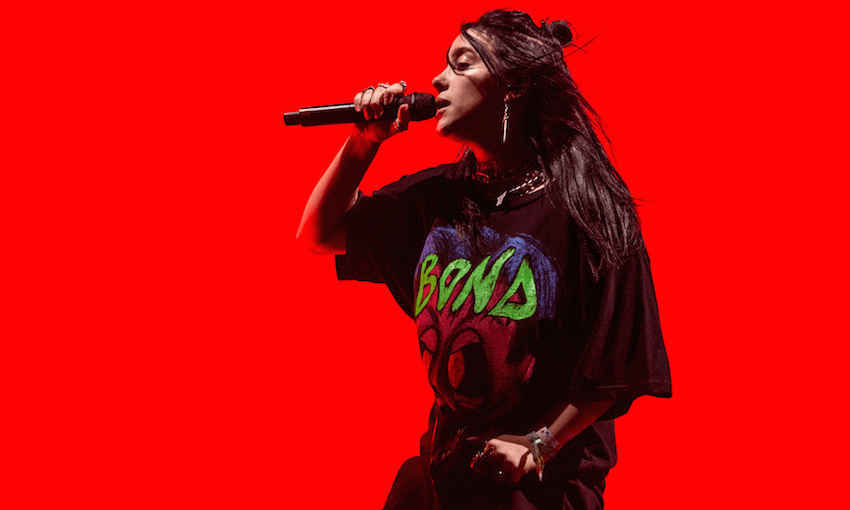 When I was 9 years old, I was given a double cassette tape – Mellon Colie And The Infinite Sadness by The Smashing Pumpkins. It was a revelation. I can remember listening to it on a trip up to Cape Reinga and back with such furious repetition that by the end of the trip, the tape and the walkman were dust. I can also remember how cut up I was when I wasn’t old enough to attend their Auckland concert, a year later.

Today, it’s no longer me desperately begging for permission to attend gigs. In what feels like a tragically short time, I am now the chaperone to my own 9-year-old spawn Ruby, to see pop-sensation Billie EIlish in Auckland. Full circle, or something equally as sentimental.

We have been preparing for this night since the 17-year old’s tour was announced several months ago; a huge event for a kid who describes the L.A. native as “super dark and scary, mum”.

Heralded as a creative prodigy, it’s evident as soon as we step into Spark Arena that her music, art and fashion speak directly to young people the world over. Despite my obvious exclusion to the Eilish fan-base, the night’s focus was Ruby exploring the sheer fury and adrenaline of live music.

Billie Eilish is a force; so charismatic and so clearly talented it isn’t hard to explain her quick ascension into pop royalty. As she put it herself, the night roughly marked a year since she played to a 200-person audience at the Tuning Fork, literally next door to Spark Arena, the venue she had now sold out packing in 10,000 strong. And as a result, it felt like one massive celebration.

The whole evening was high energy – whether delivering ‘straight fire’ with the more upbeat tracks like opener Bad Guy or the more introspective ballads like I Love You, Eilish holds the attention of thousands of young people with ease. And it feels like they are all friends.

Lighting the sky with phones as if they were stars, fans continually screamed her name as the pop star at times seemed to break with emotion. The deafeningly loud audience was so obviously dedicated; throughout the night, there wasn’t a single kid in our vicinity who didn’t know every single word of every song.

Eilish’s connection with her brother Finneas is especially noteworthy. Producing and co-writing her music, he also supports and grounds her as she bounces from one side of the stage to the other. To have such a connection with your main supporting musician in a live performance context must give a huge sense of security, and I would bet this is at least one reason for the slick delivery of music.

Throughout the 90-minute set, Roo held tight to me. As one of the younger members of the audience, she did well to mask how overwhelming things must’ve felt at times. The sheer number of people; the intense visual backdrop – cue giant spiders crawling everywhere during ‘You Should See Me In A Crown’ and the thumping drumbeat piercing through your chest are all kind-of terrifying moments when you are heads below most concert-goers. But also, kind-of wonderful.

When we tucked into bed post-gig Ruby told me it was the best the night of her life – she wished she could do it all again. And as she drifted off to sleep she asked me if she was the biggest Billie fan there tonight. When she woke the morning after she cried because it was over. Because she wanted to do it all again. And as heartbreaking as that was, that’s the impact of becoming a music fan.

The music bug fills you up and gets in under your skin. It makes you feel welcome and connected, close to like-minds in moments of loneliness; friendship when friends are few. For many of us, it’s a bug we never let go of and continue to chase for the rest of our lives. And most importantly, it’s an integral part of growing up, sometimes partly responsible for the kind of people we become.

Ruby’s obsession with Billie runs deep. She has noticeably changed because of her influence. She walks differently and talks with a different confidence the more she comes to know herself through Eilish’s music. She also wears her pants too low and her shirts too baggy and has decided she might throw in an occasional swear behind her bedroom door.

It was intended for us to write this in a joint effort, my dear Spawn’s first soirée into the world of pretending you know what you are writing about using words you once read on Pitchfork. But this morning, once she rubbed the sleep from her very tired eyes, she realised just how quickly this life-defining event had been and gone. In that moment, the experience became too difficult to describe.

So, in an attempt not to put words in her mouth, I asked her a few questions with responses appropriate to summarise all the feelings:

Roo on why she loves Billie: She is fully sick. Her style, her writing, her clothes all inspire me. She makes me feel – I don’t know how to explain it – she makes me feel like, y’know, powerful and confident.

The best part of the evening: Copycat. I loved watching everyone go crazy after the bridge when Billie yells “sike”. I also loved dancing to Bury and Friend and singing along to I Love You with my phone flashlight.

On being a Billie fan: I feel like I want to be the best and biggest fan. And thanks to my (cool) mum, I now have a really awesome Billie Eilish hoodie I will never take off.

What she wants Bille to know: I love her. She’s awesome. I think I am one of her biggest fans and one day I want to meet her. I hope she’s happy and that she knows how amazing her concert was.