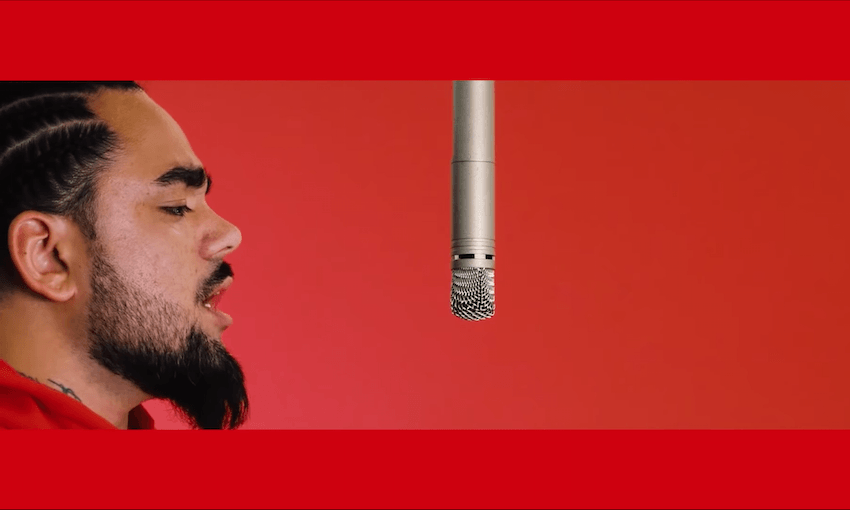 Poetik is a fresh talent in the Auckland hip hop scene, but he takes a very retro approach to his music, creating G-funk bangers and selling CDs direct to fans as if the internet hadn’t been invented. Gareth Shute caught up with him to talk about his old-is-new approach and why it’s all part of his desire to represent Samoa to the fullest.

The importance of Samoa to local hip hop is hard to understate. There’s even a theory that the first element of the culture to arrive here – breakdance – came first via American Samoa and that it took the name “bopping” only within this country because this was how Samoans pronounced the word “popping.” No surprise then that the lineage of NZ Samoan rappers within local hip hop makes for an impressive list: Dei Hamo, Ermehn, Brother D (Lost Tribe and founder of Dawn Raid), King Kapisi, Mareko, Savage, Feelstyle, Tha Movement, and Scribe.

Poetik (real name Ventry Parker) is proud to place himself in this history. He was born in Henderson but first got into hip hop while living back in Apia as a young teen. His recent Hamofied EP shows his particular interest in West Coast rap and G-Funk, which he sees a natural flow-on from this historical Samoan connection

“Most Samoans abroad live in California and Utah, where everything is just West Coast style. So those were the tapes and CDs that they brought back home. Aside from Biggie Smalls, there wasn’t much New York rap being played in Samoa when I was young. Samoa is still way behind – even when the internet and Youtube came out, we were still on tapes, records, and CDs over there. Plus the lifestyle in LA and Long Beach is all about coasting – that vibe where its sunny all year round and you have the cars and the girls out. That’s like the island life too.”

New Zealand’s connection with West Coast rap was further solidified in the 90s with the cult success of US-Samoan group Boo-Yaa Tribe. They came out of the neighbourhood of Carson, California which continues to be home for many Samoan immigrants. Poetik made his own connection with that scene by going there to shoot his video for G-funk inspired track ‘Life is a Hustle’ (featuring US-Samoan rapper, ZeekUC, who turned out to be one of his distant cousins).

One surprising aspect of the trip was that Poetik paid his airfares by selling CDs and T-shirts out of the trunk of his car. He says he’s now lost track of the thousands upon thousands of CDs that he has sold direct to people on the street.

“It’s like I say in my track ‘Khakis’ – I’m an old skool hip hop guy, even though I’m a new artist. I don’t get into the new fashions so quickly. I’m old fashioned even with the CDs out the trunk and going door-to-door like a Jehovah’s Witness.

“Friends tell me, ‘you know you can do it all on an online store?’ I say, ‘Yeah, I know I can, but just let me have fun with my people here, I want to go out and meet everyone.’”

This work ethic soon gained him respect in the Auckland rap scene and he was approached by Andy Murnane from Dawn Raid/1979 Management (though they’d previously met when he supported a Dawn Raid promo gig in Apia). Rather than releasing his work via Dawn Raid, it was decided it would be better for him to continue building what he’d started with his own label, From the Ville.

Poetik’s connection with 1979 management also helped him hook-up with Smokeygotbeatz (SWIDT) to do two tracks, funky street track ‘For My City’ and smooth jam ‘Tonight’ (the pair also have a soon-to-be-released new track that uses a beat Smokey made for his sessions with YG). Poetik found working with the producer was the perfect fit. “He loves the West Coast sound as much as I do, so it was a match made in heaven.”

Murnane suggested that rather than doing his own tour to promote the Hamofied EP, Poetik should join up with the Runtingz tour of up-and-coming reggae artists. Not only did Poetik agree, he also ended up appearing on the ‘Runtingz Anthem’ single that was released to promote the tour:

“It was trippy because I’m a rapper and even though I love reggae, I didn’t know that much about it really. So after being with those other artists for three months, I was fully schooled about reggae, Rastafari, and how how their vibe is compared to hip hop.

“Hip hop can be so competitive – sometimes we’re quick to hate on the next guy. Then you step into the reggae world and everyone’s like, ‘hey brother, bless, love your stuff.’ They’re sincere about it too, so the whole thing was such a blessing for the spirit. It reminded me to chill and accept things – embrace everything good and bad, then let it out with your art.”

Poetik’s knack for hooking up interesting collabs is also shown on the laidback track, ‘Lets Kick It,’ which features Melodownz. He even found a family connection – both rappers share the same great grandfather on their European side. The family vibe also extends to the video which shows them chilling at a BBQ at Poetik’s mum’s house (along with other guests like Jess B, SPYCC, and Feleti Strickson-Pua from Nesian Mystik).

The Hamofied EP as a whole also feels like an invitation into Poetik’s life as an urban Samoan, emphasised by the short skits that separate the songs. At the start, you hear him watching The Fresh Prince of Bel-Air while being told off by his mother in Samoa, before heading off an airplane to find his feet in Auckland.

Throughout Poetik’s raps he is constantly shouting out “685” (the country code used for phone calls to Samoa), spelling out the name of his home city, repping Vailima beers, or referring to friends as “Uso” or “Uce” (which means “brother/sister” if you’re talking to another person of the same gender).

The EP is also interrupted on a couple of occasions by a voice with an exaggerated Samoan accent, which comments humorously on how the EP is going (“wow, what a stink album, aye?”). These short skits were performed by Fresh TV comedian (and director) Darryl Laumua, who happens to have been a member of Poetik’s very first hip hop group back in Samoa, Vital Status.

Poetik’s desire to represent for his heritage is evident from the opening bars of his EP, which are actually a sample of his dad singing with his band in Samoan. In order to connect further with his ancestry, Poetik recently returned to Samoa to be tattooed in the traditional tatau style.

“It was really painful, but it was important for me to get that because my grandfather was the last person in my family to have it done, 80 years ago. My family are half European so my generation doesn’t have the language that my father’s generation had – they knew who was connected and the stories from a thousand years ago. That’s why I wanted to be the one amongst my siblings to go back and try to learn it for our kids. The tatau was part of that process. When you get that it means you’re the one that serves the people. If there’s a funeral, you have to be the one who says – alright, we’re killing a cow to feed the people, we’re doing this, we’re going up to the jungle to get more food.

“I see that as my role in hip hop as well – to serve the art and try to build a platform so we can live off it and make money and feed our kids. There’s so many great artists who can’t make a living off it at the moment, so I’m just trying to work out ways where we can get everyone together to move forward. That’s my koha to the game.”

This piece, as well as Poetik’s upcoming single ‘Tonight’, was made with support from NZ on Air.