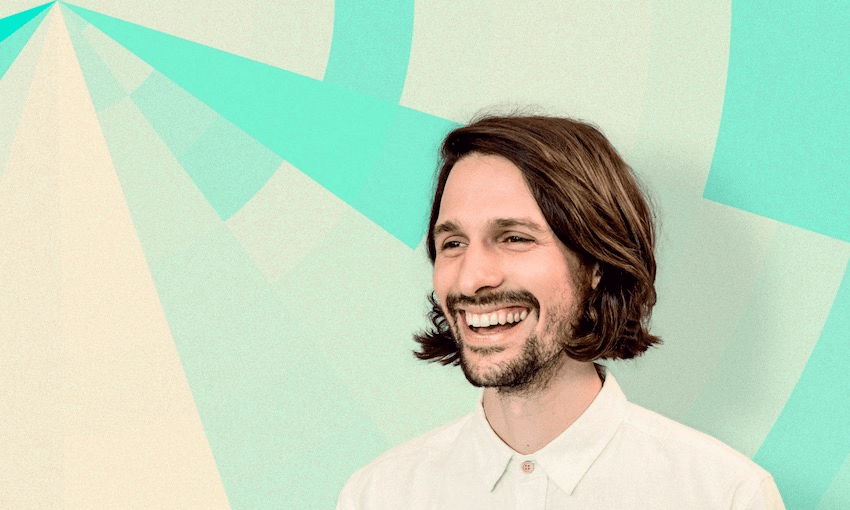 Bridie Chetwin-Kelly talks to producer and singer Jon Lemmon about his relentless positivity and how to bring gender inclusiveness to dance music.

Dressed in blue pants covered in birds, a white button up, long hair and a huge glistening smile – it was hard not to be caught up in Jon Lemmon’s positive energy. Which is exactly what he wants people to hear through his self-described “ecstatic dance pop”.

Born in Los Angeles, Lemmon made the move to Wellington when he was 19 years old to start a band with his brother but after he discovered that his brother couldn’t commit to being in a band with him he decided to go it alone.

Fast-forward 10 years, a new single called ‘It’s Gonna Be Alright’ (funded through NZ on Air’s Making Tracks scheme) a new music video and his name on the bill for Auckland City Limits, he’s feeling humbled. Even more so, he’s amazed to be on the same bill as Grace Jones, even if it is in really tiny writing at the bottom.

The Spinoff: With all this excitement going on, how are you feeling?

Tell me how you wrote your new single ‘It’s Gonna Be Alright’.

I basically had just been broken up with and in the process of losing my job and things were stressful but I had a live performance coming up that weekend and I knew I was going to have to bring a positive vibe and uplift people, so I closed my eyes and just like let go and surrendered to the reality of that moment. The words to that song just came and it was a feeling of joy and freedom, of ‘Ah, it’s gonna be alright’. It was like five years ago, I never released it, never touched it and then I was like, ‘I want to release that’ and so I made it relevant to 2017.

So would you say you’re in a different place to when you wrote it?

Yeah, but the thing is the along the way I was really stressing out, especially when I was mixing it and forgot the whole message of what this thing was about and then like every now and then I would actually listen and be like ‘Oh yeah!’ I think I wrote it as a tool for myself and then released it so it could be a tool for other people. Like a mantra, because the song repeats the same thing over and over again.

You spent the first 19 years of your life in LA and then moved to Wellington over ten years ago. What part of the world has influenced your music the most?

It’s funny because music is listened to from everywhere now but I came to New Zealand and started going to these underground music festivals which New Zealand does so well, in the middle of forests. That’s where I started playing, at these shows.

At one of them, I was having really bad social anxiety as you can at these things and I realised what am I freaking out about? All these people, they are just humans and they’ve got their own things they feel scared or nervous about.

I remember playing this festival in the Coromandel [Chronophonium] and the cops were going to be shutting everything down and they said, ‘Jon why don’t you play a renegade set?’ Earlier that day, the organisers told me the cops would shut it down at some point and they said, can you let people know to not fight and just let them do their job. The cops shut down every stage and somehow I ended up being the last stage that remained and everyone was there and the cops came at the very end and I told everyone to relax and I have a part in one of my songs that’s like, ‘We’ve got love, we’ve got love’ and as the cops were taking all our gear and PAs, everyone was chanting ‘we’ve got love’ and that was the moment where I was like, this music is really working.

You created the bedroom producers Facebook page that has over 4000 members, what was your intention with that?

It’s an interesting story, I made that group because I wanted to talk to 15 of my friends about music production and by the end of the day it had 300 people and I was like, ‘What?’ There was a lot of demand. I have a problem what that group which is that it’s got a misogyny vibe to it.

Is there that kind of misogynist, bro vibe across electronic music do you think?

It’s been an interesting journey. I have been working on this and the fact that the group is 95% male and women message me and say they don’t feel safe speaking out in the group and guys being like, ‘Hey boys’ and I would say, be more inclusive and use different words and they would get super defensive. So I have been contemplating how to upgrade the culture of that group. And upgrade the culture in pop music and electronic music. That’s my main interest.

Much like in your music video which includes all walks of life in it?

Yeah, that’s right. It’s a key part of my message. We have to be mindful and that group was an important lesson for me in that we have to take these things seriously otherwise it defaults to the status quo.

Is that the kind of music you want to make?

Yeah, I think I want to make something fundamentally different. I don’t listen to a lot of what is out there at the moment, I think content-wise it doesn’t make my heart sing. It makes my body move but I want my heart to sing as well. I’m inspired by Bill Withers. ‘Lean On Me’ is honestly one of the greatest songs ever written.

The music I want to hear doesn’t exist I think. What’s the music for us you know? Aside from consumerism, what about other people? I want to fill that hole. It needs to be authentic. I think you have to be vulnerable and honest about who you really are.

And lastly, I have to ask because it’s too obvious not to, tell me about your likeness to your name twin, John Lennon.

Jon Lemmon plays at 5:05 pm on the Golden Dawn Stage at Auckland City Limits, sponsored by Spark, at Western Springs Stadium and Park on 3 March 2018. Tickets are available here.

This piece was made possible by NZ On Air and, like all of The Spinoff’s music content, by Spark. Listen to all the music you love on Spotify Premium, it’s free on all Spark’s Pay Monthly Mobile plans. Sign up and start listening today.