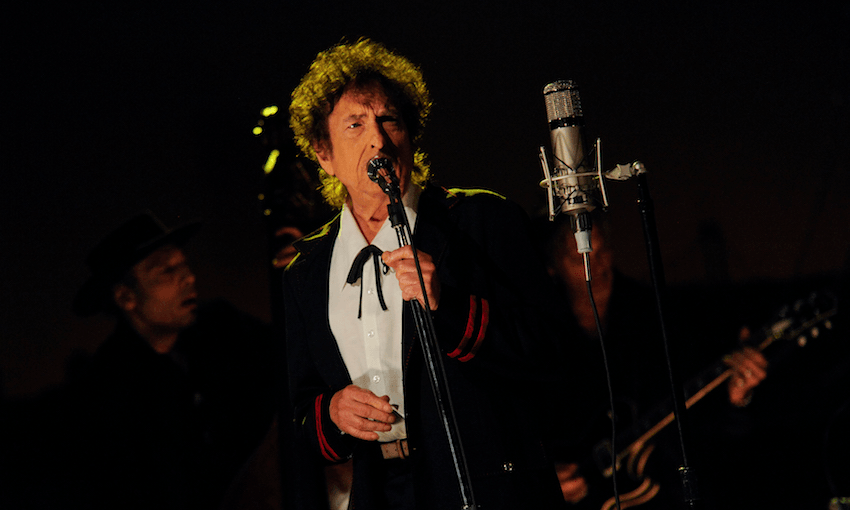 Henry Oliver: We’ve been to many of the same Dylan shows over the years, sometimes together. This one was like many of them but also like no Dylan show I’ve seen before. What did you think?

Harry Cundy: Yes I remember we travelled to Hamilton to see him last time he was here (with the same stage lights). And actually the first time we ever spoke it was about Dylan I think. Right before you were about to play a show at the library in Grey Lynn…

But the show – I loved it! I have loved every Dylan show I’ve seen though (apart from the one time I saw him play outside at a festival). But the show tonight felt different. I think its come at a time when – to be honest – I have/had almost completely stopped listening to Dylan. There were years of my life when I listened to nothing else, or at least been positive that I would never not be listening. But I just haven’t been. I have listened to his new covers albums (Triplicate, Fallen Angels, Shadows in the Night) only a little. And I have found it hard to listen to old Dylan that I used to love. It feels overdetermined now somehow.

Which is why I loved this show so much. It was so exciting, so invigorating to see him revise, rewrite his songs both new and old. We heard new arrangements of course, but I remember hearing half a dozen new verses in various songs at least. None of this should be such a surprise of course. He has done this every time I’ve seen him I’m sure. And this is also a guy who has been undermining his own profile, history, oeuvre, persona, etc. since at least Self-Portrait in 1970 (on and off I realise – he wasn’t big on self-reflexivity in his ‘Christian phase’ for example). But this time I was really feeling it, because I had had this feeling of overdetermination.

How did you enjoy it? And have you been listening to Dylan recently?

Henry: My current relationship to Dylan has been much the same – I’ve listened to each of the last three albums twice each maybe, but before that, really enjoyed Tempest. I hadn’t even really thought much about him at all recently until this weekend and, for much of his set, I thought a lot about why.

Here’s the best I could do: despite the subjects of many of his most well-known songs being war and injustice (he always seemed to play ‘Masters of War’ during the Bush II years), his music just doesn’t feel that ‘relevant’ anymore. Whatever his politics actually are (which hasn’t been super explicit since the Civil Rights movement) he just feels closer to what’s wrong in the world than whatever the antidote might be. Which isn’t necessarily ‘fair’ – writing off the world of white men of a certain age – but it’s not just him. I haven’t been reaching for my Neil Young records either. The feelings and opinions of successful baby boomers are culturally and politically ubiquitous. Why would I need any more?

As for last night, I loved it too. I couldn’t make out enough of the words to spot every new verse other than when I was expecting something and it wasn’t there or I heard words that I knew I hadn’t heard before. But what struck me was his energy. I can’t remember him sitting/standing/sitting so much, with his piano so high in the mix, always playing the least-competent/most-interesting notes. And when he stood and sung just with the mic stand, with a little almost-jazz-hands flourish, you knew he was feeling good. If you were allowed to use your phone that would have been the moment everyone pulled them out to Instagram, tagging in their kids.

Harry: Well, defending boomers is an uncomfortable place for me to be. But I feel like I have to with Dylan.

I agree re his politics. In that the last time I can think of that he was capital P “Political” was on Infidels (‘Neighbourhood Bully’, ‘Union Sundown’) both of which seem lame and one-dimensional (and in one of those cases quite objectionable). ‘Workingman’s Blues No 2’ on Modern Times is glorious but too much pastiche to be taken at face value. And while ‘Masters of War’ was, of course, topical, but that has always been least favourite of his ‘topical’ songs.

Politics aside, I still appreciate his insistence on rearranging his own music as an artistic gesture. I have been thinking about this particularly in relation to his other insistence that no-one record any of the performance. Security wasn’t sweeping flashlights like at Prince at Aotea Centre. But it was strict. But for the lyrics (and only then to the extent he hadn’t re-written them) his rearrangements were almost unrecognisable from the canonical versions on his records. I am thinking about this idea of an artist if not quite negating, at least significantly undermining, his official recorded history, but refusing to replace it with any other record. And these rearrangements of songs, with new verses, that only exist in their performance. This is the majority of the history of folk music (at least before the Harry Smith / the Carter Family, etc.) though I guess. But it’s fascinating to be present. Plus, on a more petty level, I really appreciate the subversion of nostalgia which seems to be such an organising principle of boomer (and even Gen X) cultural production/consumption. Dylan is not out here touring classic albums from start to finish.

I guess there is a post-modern aspect of Dylan that I still really appreciate. I remember when Love and Theft came out in 2001 it was at this point my friends were starting at Elam, and I was beginning to learn what post-modernism was. Even just the title of that album was a good introduction to the subject. As for his movements. I was picking up what he was putting down too. But not because it was an old person behaving young. It was the theatricality of it, and his outfits (a theatricality which has often been present, even from his days where his persona heavily ‘quoted’ Woody Guthrie).

Writing this down I realise that there is a maybe a tension between being anti-boomer nostalgia while appreciating his extensive quotations. But I can live with it.

Also, I also really enjoyed his piano being so high in the mix. I can’t remember another concert ever hearing his instrument being so clear (other than his harmonica).

Henry: Yes! It’s his rearrangements that make it most worth seeing him time and time again. Plus, I love seeing people not that familiar with where he’s at having to deal with what they’ve been subject to. The first time I saw him was in Manchester and the reaction of some of the boomers around me wasn’t a million miles away from those young men and women (okay, mostly men) at the Manchester Free Trade Hall in 1966 who, famously, booed and called him Judas for playing an electric guitar with a band.

And yes, at the risk of sounding like one of those kids-these-days think pieces about how no one truly *lives* anymore, it was nice to experience something ‘in the moment’ that wasn’t being recorded, even if only to exist on some Instagram stories or forgotten on someone’s iCloud.

I guess love and theft is what it’s always been about. I love those stories in No Direction Home of him stealing records and songs, stealing looks and ideas, stealing melodies and phrases. Now it’s stealing from Junichi Saga or Henry Timrod, Time magazine or an online cheat sheet for Moby-Dick.

I love this quote, in response to plagiarism allegations, from a 2012 Rolling Stone interview that somehow captures his approach to pastiche and quotation, and to his approach to performing his own work:

I’m working within my art form. It’s that simple. I work within the rules and limitations of it. There are authoritarian figures that can explain that kind of art form better to you than I can. It’s called songwriting. It has to do with melody and rhythm, and then after that, anything goes. You make everything yours. We all do it.