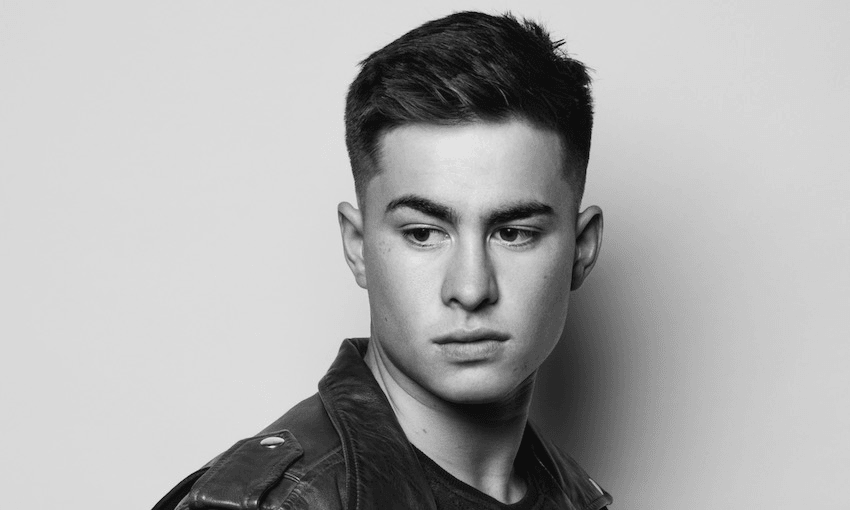 At 16 years old, Jackson Owens was handpicked for a pop trio by former Backstreet Boys producer Timothy Coons due to the strength of his musical cover versions on YouTube. Since then he’s left his hometown of Turangi behind to hunt for a break in the US. Gareth Shute catches up with Owens to discuss his debut solo single, ‘Touch,’ and why breakthrough success for the singer now seems closer than ever.

To say that Jackson Owens started young is a severe understatement. His first trip overseas as a musician came when he was just 12 years old when he qualified for the New Zealand team that travelled to the 2010 World Championships of Performing Arts held in Los Angeles, California (he received a gold medal, two silvers, and a plaque for winning the under-16 vocal category). This wasn’t even his first experience in front of a large crowd – the year before, he’d opened for Stan Walker in Rotorua (and the pair have continued to perform together over the years).

Owens credits his family upbringing for his amazing vocal skill, a claim that’s backed up by the video he recently posted to his Facebook showing his younger sister, Georgia, singing with an equally engaging and soulful voice. “Music has a huge influence on my family,” he says. “[We] all enjoy singing or playing instruments. My sister and I started singing from a young age and were always encouraged to perform wherever we could.”

After the competition in LA, he returned to New Zealand, but he was eager to keep pushing his singing forward so began posting videos of himself doing cover versions on YouTube. This led to him being contacted by US music industry stalwart Tim Coons, who is best known for his production work with Backstreet Boys, but he also played a key role in the early careers of NSYNC and JoJo. In 2014, aged just 16, Owens headed with his father Bobby to Florida, where he was placed in a boy band with Christian Wossilek and Eben Franckewitz, a former American Idol competitor.

The trio, Far Young, performed across the US, made music videos, and did interviews on television and radio, but never quite managed the break they needed (despite tens of thousands of YouTube views and many miles travelled). Still, Owens had such passionate fans that they started an online campaign to keep him in the US when his original visa ran out. In the end, Owens was happy enough to go it alone when Far Young fell short of pop stardom. “Having a solo career has always been my goal,” he says. “But I’m fortunate to have had some very exciting opportunities come my way from being in the band, plus had a lot of good experiences and I have made some great friendships and relationships. I’m really excited about the future.”

Owens went back to the approach that gave him his break in the first place – posting cover songs to YouTube, most notably a down-to-earth duet with American Idol winner Jessica Sanchez (the pair’s version of ‘Georgia On My Mind’ is now nearing half a million views). This year, he has taken this approach to a new level by recording a set of covers in a professional studio with first-rate musicians like New Zealand piano virtuoso Jacob Nansen.

“I choose the songs I sing just based on what mood I’m in or what songs I’m feeling at the time,” he says. “I grew up singing along to the old school artists like Sam Cooke, Otis Redding, and Stevie Wonder. I really enjoy singing songs that show that side of me. I have had the pleasure of working with a lot of talented musicians.”

Owens remains focused on the US market but continues to build an audience at home when he can, like performing with Six60 at Horncastle Arena in Christchurch in March this year. His latest single was created with producer Alex Wildwood.

“My manager Josh Peterson has been hooking me up with a lot of talented people and I am very fortunate to have worked with Alex. He’s real dope … ‘Touch’ is my first solo release and I co-wrote it with Alex. It’s about a relationship you’ve had where you find yourself missing and longing for that emotional and physical presence or connection that you once shared, but didn’t realise what you had til it’s gone.’

Wildwood’s name might not be familiar but you may well have unknowingly heard some of his work – his own act, Beeches, has racked up a million streams on Spotify and he’s produced a run of songs this year with rising local pop acts like Sachi, NÏKA, and Siobhan Sainte. He and Owens blend their styles perfectly on ‘Touch’, with poppy synth sounds riding over a chilled yet grooving beat that is a perfect bed for Owens’ voice.

And this is just the beginning for Owens, whose career has been building to fever pitch in the last few months, spending time in New York shooting a video for ‘Touch’ and doing recording sessions with a pair of New Zealand expats – Henry Beasley from the band Balu Brigada and Simon Oscroft from the band Frills (he was formerly in Midnight Youth). His music video for ‘Touch’ is planned to drop over the next month and he has another single, ‘The Weekend,’ ready to follow on its heels. After eight years in the industry, Owens is still only 20 years old and more ready than ever for his moment to shine.

This piece (and Jackson Owen’s ‘Touch’) was made possible by NZ On Air and, like all of The Spinoff’s music content, by Spark. Listen to all the music you love on Spotify Premium, it’s free on all Spark’s Pay Monthly Mobile plans. Sign up and start listening today.