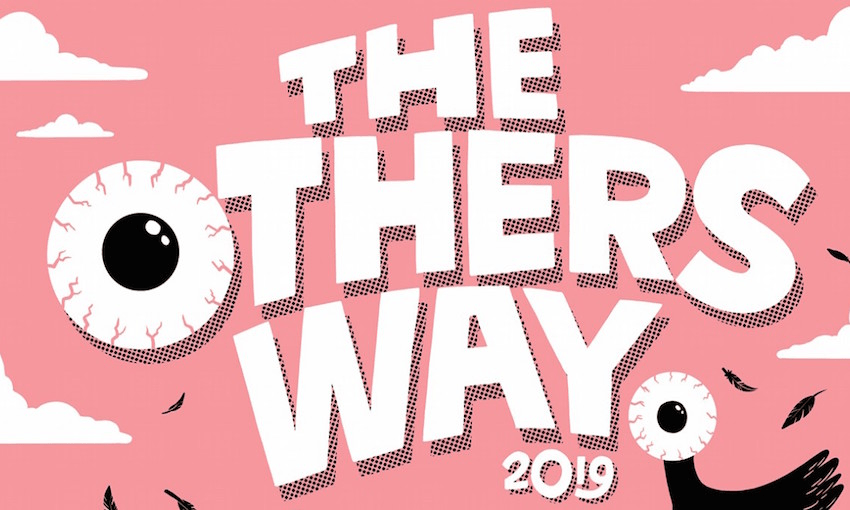 The Others Way festival drops down in Auckland tonight – here’s how to do the festival in any way you please.

Find your way: How to do The Others Way festival, whatever your musical taste

The Others Way festival drops down in Auckland tonight – here’s how to do the festival in any way you please.

Tonight, The Others Way festival makes its welcome return to basically everywhere on Auckland’s Karangahape Road. Part vaunted local music festival, part exercise in divining the exact organisational midpoint between chaos and transcendence, the night will see a total of 46 acts grace stages along uptown’s main drag. Starting just after the sun goes down and ending not altogether long before it comes back up again, it’s an endurance event and one which deserves respectful preparation.

Because the festival’s very design makes completism functionally impossible, however, we’ve very kindly gone to the trouble of mapping out a few potential ways to approach your night on K – whether you’re trying to discover the next big thing or you’re content with just doing whatever will result in the least knee and back inflammation, here’s five potential ways to attend The Others Way.

The Others Way truly is what you make it, and if what you choose to make it is an opportunity for either milking your nostalgia gland or finally learning whatever the fuck your 1980s scenester parents are talking about when their eyes glaze over and they start talking about “The Gluepot” or “The Empire” or “Poppy Tea”, you’re in luck: plant yourself at the Peach Pit end of the street and you’ll barely have to move all night.

Start the night with new Flying Nun signees Mermaidens at Studio, catch the back-end of reunited Wellington skuzz legends Cortina’s set over the road at Galatos, then spend the night oscillating between the two rooms like a primitive synthesizer on a Silver Apples record – if this approach appeals to you, you’ll definitely understand that reference.

No one talks about “Freak Folk” any more, and personally I think that’s a problem. If, like me, you pine for the days when a band wasn’t considered real if their album didn’t have a tangential Devendra Banhart connection or at least one 19-minute electrocoustic dirge, the curators have this year done you an absolute hero’s service – between American underground hero Gary War, Auckland underground hero Jeff Henderson and his Superstarz, F-Nun flag-bearers Purple Pilgrims and Dog Power, and the aforementioned Cortina, anyone looking for a night out that feels like the aural equivalent of licking the fungal spores off your uncle’s Xpressway collection will be incredibly well served.

Pour one out for The Terminals, sadly scratched from the lineup late last week, but honour their memory by catching the start of side-project Sad Freq’s set at Audio Foundation. Later on, watch their spiritual descendents in weirdo Dunedin trio Negative Nancys up at Wine Cellar, then pop up the St Kevin’s Arcade stairs to catch the tail-end of the gifted and extremely buzzy Shiraz and LSJ’s short set.

I should probably note, however begrudgingly, that some people like to listen to music that doesn’t sound like the spooky voices I had in my head from ages 8-11. If that’s you, The Others Way is as obliging a host as any – start the evening by catching an early set by the incredibly good Being. at the low-key extremely strong Girls Rock Camp stage, check out basically everything on the all-killer Milk Records lineup at Hopetoun Alpha (Aussies Jade Imagine and Jen Cloher, alongside Avondale icon Tiny Ruins), luxuriate in the white-pants-and-white-wine Socal sounds of Chris Cohen and the gorgeous sound-blanket of Christchurch’s Ben Woods, then finish off your night by getting a plum spot up the front for New Zealand’s best ever rock band Straitjacket Fits. Yes I mean that, and no I won’t be taking any questions.

NOTE: Being. will also play at 9pm at Neck of The Woods, so if you enjoy this first set, heading along to that one too will be kind of like a super-encore. What a fest!

If you’ve ever felt like you’re not really living if a subwoofer isn’t currently vibrating the teeth straight out of your gums, I would like to tell you firstly that I absolutely relate, and secondly that this festival has exactly the thing for that. Between the metaphysically stoned low-end-heavy psych of Ounce, the sweat-soaked and riff-driven chaos of Miss June, the Soundcloud soundclash R&B of Vayne, the blunted musical melange of Troy Kingi, the cooked-and-howling sermonics of Creme Jean, and finally the chart-topping and chest-rattling bass of young heroes Church & AP, there’s scarcely been a better or more varied way to ensure that you spend Saturday listening to the sound of your remaining braincells hissing around what’s left of your eardrums. Extra for experts: the Friendly Potential Afterparty is free for Others Way wristband-bearers, because sleep is for the weak or at least for the weekend.

Any Way You Want It, That’s The Way You Need It

If, hypothetically, you had a kid three years ago and currently glean all of your insight into the contemporary local underground from the bFM inside jokes that you don’t understand when driving around on a Saturday afternoon trying to get your toddler to go to sleep for even just fifteen blissful minutes, The Others Way is a great opportunity to accumulate enough intel on what’s actually happening in the local music scene to keep the section of your brain designated ‘Kiwi Tunez’ from falling into atrophy for at least another nine months.

From torch-bearers for the New Dunedin Sound (Soaked Oats) and indie-rock supergroups (Dateline) to bands that sound like what I assume Pavement and Chromatics would sound like if they’d grown up in the Auckland ‘burbs (Water and Crap Date respectively), anthemic indie rock (Hans Pucket, here playing with a full horn section), post-hardcore indebted organ freakouts (Wax Chattels), should-be-huge rap acts (Shiraz & LSJ, again) and about-to-be-huge rap acts (Church & AP, also again), there’s truly a lot to take in – you may not be able to catch every minute of every one of these sets, but you’ll have a whole lot of fun in trying.