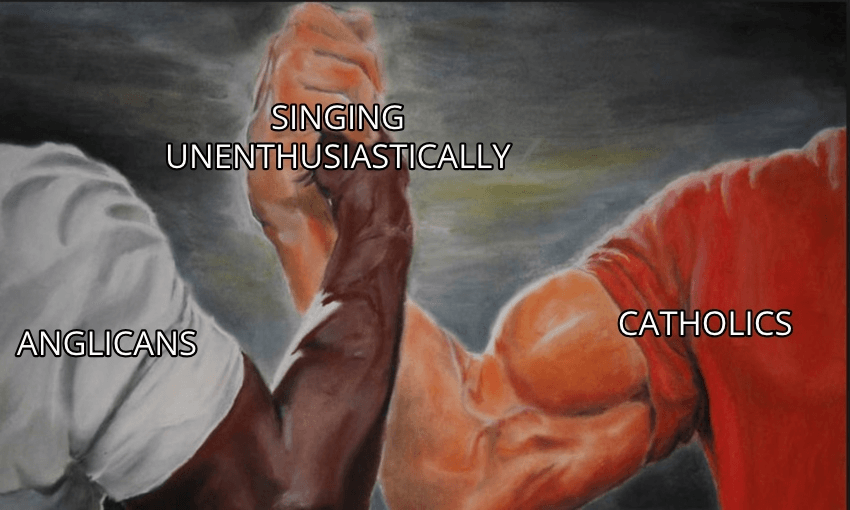 An alliance for the ages.

A definitive ranking of the best church bangers

An alliance for the ages.

God may have created all of his children in his image, but the same cannot be said for his hymns. Some church songs are good, some are bad, and some are absolute bangers. Madeleine Chapman ranks the best of them.

Some say that in order to experience complete and utter silence, a hearing person must travel to outer space. But there’s another way. Travel to a Catholic church on a Sunday when an amateur is on projector duty, wait until the kid forgets to change the lyric slide for the third verse of ‘Here I Am, Lord’, and relax into the heavy, heavy silence.

In 2017 there were 66,000 Catholic school students in New Zealand, holding steady at 8.3% of the population. This means one thing and one thing only: 66,000 students in 2017 mumbled through some melodic version of the Lord’s Prayer.

Most church hymns in New Zealand are boring in that they were made to be sung as a sort of chant, and by mostly white people. There are some great gospel songs out there, as well as beautiful Samoan/Tongan/Māori hymns. But if you attended a religious school in New Zealand, you definitely didn’t sing those songs. Instead, you sang something like this:

Psalm 46: God is our hope and strength

This is old-white-people church singing in a nutshell. No discernible melody, written exclusively for out-of-tune dads to mumble loudly in an attempt to encourage participation from their reluctant children. Keep in mind that this version is literally the best ‘Psalm 46’ has ever sounded.

Thankfully, not every church song has as many words crammed in each line as ‘Psalm 46’. But there were a lot of bad and boring ones, or, as my sister eloquently put it, some that were “like seven slides long”.

As a weekly church-goer all my schooling days, as well as Catholic primary school and Anglican secondary school, I mumbled my way through a lot of songs. Here are in my humble opinion, and also objectively, the best ones. They’re not restricted to any one denomination, mainly because most bangers cross church lines and are sung by all of God’s children. So put on your Sunday best, stand up straight, and join me in singing praise to the greatest church bangers of all time.

As primary school children, this arrangement was incredibly hard to sing but you better believe – as Mary once believed the Angel Gabriel – that we tried our darnedest. It’s a pleasant tune that, sans lyrics, wouldn’t be out of place in a twee rom-com set on farm. Or maybe it’s terrible and I have Stockholm Syndrome after singing it every Sunday for 15 years.

9) Guide Me O Thou Great Redeemer

‘Guide Me O Thou Great Redeemer’, the oldest song in the world. No song makes more use of the gigantic cathedral organ than this one, except maybe Hans Zimmer’s Interstellar score when he got an organist to fall asleep at the keys (I love that score but it’s a lot). Amazing that at the wedding of Prince William – the future head of the Church of England – everyone still needed to read the lyrics of the most famous Anglican hymn off a booklet. Embarrassing.

8) This Little Light of Mine

Made (even more) famous on The Fresh Prince of Bel Air, ‘This Little Light of Mine’ was sung at every school, religious or not. If your school had more than five brown students, you sang the chorus repeatedly, adding harmonies and echoes. If your school had fewer than five brown students, you sang the extended version, including the verse that is “Hide it under a bushel? No!” repeated. There’s something about yelling in a song that really gets white people going.

All hymns sound better when sung in a language – any language – besides English and that’s a fact. I’ve been including professional versions of each song in an effort to make them sound better to new listeners. But that’s not how they sound when regular kids sing them. This version of ‘Mō Maria’ is exactly how it’s supposed to sound and I love it. Be gone, harmonies, you are not needed here.

6) How Great Thou Art

I mostly included this one because of the very impressive but also hilarious performance above. This hymn sounds incredible when sung by actual singers (Elvis has a great version, as does Carrie Underwood) but is pretty excruciating when sung poorly at a school assembly. Put it this way, no 13 year old is going to do the “oooh”s and “aaah”s that this choir did. Bonus religious crossover: the beginning of this performance sounds exactly like King Herod’s funny voice in Jesus Christ Superstar (1973).

5) Lord of the Dance

In the grammy-nominated single ‘Shake It Out’, Florence and The Machine sings “it’s hard to dance with a devil on your back”. A line that stands out in an absolute banger. But she stole that line from English songwriter Sydney Carter who, in 1963, penned it in ‘Lord of the Dance’, an even bigger banger.

Sung in every Catholic primary school around the world, ‘Lord of the Dance’ serves Jesus’s life story in meme-able stanzas.

I danced on the Friday when the sky turned black
It’s hard to dance with the devil on your back
They buried my body, they thought I’d gone
But I am a dance and I still go on

Tfw office drinks get out of hand but you still want to go to town after.

‘It Is Well (With My Soul)’ is less a banger and more a beautiful lullaby. The Samoan version (‘E lelei le ali’i’) is even more so but there aren’t as many YouTube clips of it. What elevates ‘It Is Well’ is its simplicity. If you’ve never heard the song before, by the second chorus you’ll be able to comfortably sing along. And being able to comfortably sing along is crucial in a church banger.

As a bonus, the lyrics are very soothing and a good meditation on being still when life is hectic. I’ll choose to ignore the person who commented “it is only well with your soul IF Christ has expunged your sins. Repent and believe the gospel Mark 1:15” underneath this lyric video featuring many sunsets.

Anyone who doesn’t speak English and listened to this song would assume it was a chart-topping song playing daily on The Breeze and More FM. It’s got everything: a chorus that sounds like Selena’s ‘Dreaming of You’ with a bit of Westlife thrown in, and the four most popular chords in music. Yes, those three things constitute ‘everything’.

I’m positive there are 25 pop songs mashed together to create ‘My Jesus, My Saviour’. One day I’ll spend a lot of time finding all those songs and editing them together. Perhaps that day will be the second coming of Christ.

No song has been sung more in retirement homes than ‘Ka Waiata’. A staple among church choirs and kapa haka groups alike, ‘Ka Waiata’ is a childhood classic and a lot of religious kids’ introduction to te reo. All good things from this banger.

This is the one. The greatest church song of all time excluding almost every gospel song and probably every song sung in every other religion. ‘Shine, Jesus, Shine’ is it. When the demographic of Christianity is the person that goes to a sports game and, when ‘Sweet Caroline’ inevitably plays, quietly sings the verses then absolutely screams the DUN DUN DUN, the best church songs are ones that are entirely the DUN DUN DUN part of ‘Sweet Caroline’. That’s ‘Shine, Jesus, Shine’.

It has the vibe of a TV show’s theme song (like Full House or something) and is as easy to get stuck in your head. It also lends itself to being yelled instead of sung, exactly how schoolkids and white people love to engage with music.

If hearing this song doesn’t make you want to dance in a park and near a fence then I’m sorry to say but Jesus did not shine on you.

Did I snub a church banger? Let me know at madeleine@thespinoff.co.nz. It’s important we get this right.