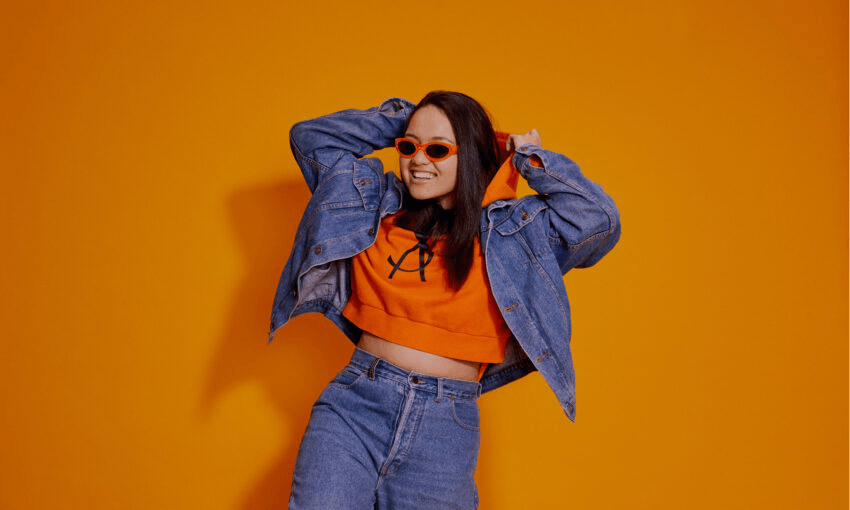 In full bloom: Paige on standing up, speaking out and always growing

Paige Tapara is a fast-rising young singer-songwriter whose debut EP explores themes of sexuality, coming of age, mental health and relationships. We asked her how it came together, and why she thinks it’s so important for NZ music to include voices like hers.

Paige swoops into the room, a cream doughnut in one hand and a Nippy’s iced coffee in the other. She’s dressed in a bucket hat, multi-coloured chequered shorts and a baggy graphic tee, and it’s already obvious that she’s cooler than I’ll ever be. But if she has an ego, it doesn’t show – when I tell her I love her fit, she replies, “the shorts only cost $3, and this isn’t my shirt!”

When, as part of our introduction, she also reveals she’s a “Cancer sun, virgo moon”, it makes sense: cancers are known to be deeply intuitive, and talking to Paige reveals an immediate talent for making you feel understood, like she gets all the woes of your life.

You might know her from her collaborations with Jess B (‘So Low’), and if you’ve flown locally lately, her single ‘Bloom’ might sound familiar – Air New Zealand plays it on landing. And while she’s influenced by acoustic R&B – think Kehlani and Jhene Aiko – Paige isn’t afraid of pop. In fact, she unabashedly loves it.

She first started uploading her covers under Paige’s Space on YouTube when she was 12, and caught some hype back in 2018 when young superstar Billie Eilish shared her early single ‘Alignments’, but it’s over the last six months that things have become a bit of a whirlwind. We caught up with Paige to talk about how she got here, and how things are going these days.

The Spinoff: Always Growing talks about sexuality, mental health and relationships. Why do those themes speak to you?

Paige: Mental health is a big thing for me. A lot of people in my family have lost people to suicide. I find the the suicide rates really disturbing in NZ – honestly, it keeps me up at night. I love music, but I like having something to talk about more than I love music. So having the two together is really important to me.

Over the past few years, I’ve learnt so much about myself. About growing into the person I want to be! And I love the feeling of being understood, and I hope I can help someone else feel understood from my music.

What’s behind the new music video for ‘Waves’?

I wrote ‘Waves’ about my 12-year-old self struggling with my sexual orientation. And I still don’t know what to label myself, but I just know that I like people. And in the video, there’s a girl that I crush on. I freeze time, and take her into the realm of what it would be like if we were in love. We go to the arcade, get tattoos and go to the skatepark. And then we’re back and she actually turns around and looks at me.

I’ve definitely had a similar fantasy in high school, pining after girls! How has your coming out process been?

Things have changed a lot in the past few years. But growing up, you could only be gay or straight. And in high school, I thought I was bi. And then I started only dating girls, but then I was liking guys too. Arghh. I just like people.

How does your cultural identity inform your music? And what does representation mean to you?

Every time I have to do something, I’m always the brown person in the room. I’m the only one. And you want to be around something that’s familiar, and that’s hard.

Being Māori, it encourages me to represent it more. I was never bothered about “the Māori thing”, or “the brown thing” when I was younger. But then I started to identify with it more growing up, and with music, well, I’m really bothered that there’s not that many people who are brown. So I’m trying to educate myself more, read everything! I always said if I won a Grammy I’d accept it in te reo Māori. That’s the dream.

You know, I overheard someone talking about genres of music. They called mainstream pop music in te reo “heritage music”! And I was like huh? That’s just racist, subtly categorising it. You go to Japan or Korea, and it’s J-pop or it’s K-pop. Look at France, you hear French music all the time on the radio. It’s part of their culture, but we push it to the side. We never hear Māori songs on the radio.

I think it’s on the way to changing, with the Black Lives Matter movement this year. And hopefully people get it in their heads that racism is a constant thing for us.

What kind of place does music hold for you?

I think this is going to sound so dramatic. But if I didn’t have music, well, there’s nothing else I know how to do. It’s the one thing I find comfort in. And I know other people find comfort in people, family, yoga? But for me, it’s music. And I think I’d be in a really damaged place without it.

How have the last six months been for you since joining Sony Music?

It’s been pretty hard. It’s so much more than just playing live music. It’s media stuff… stuff like this! Sitting in front of a camera, learning how to pose for photos.

It’s also so weird, being only surrounded by the industry. I work at Krispy Kreme which is good for me. People who have normal lives. And I love being around Polynesians, cos I’m from South Auckland, and there are none in the industry! Which I find really hard.

What have you noticed about the industry so far?

It’s competitive, it’s weird, it’s interesting. And seeing my artist friends blow up, you see them change, and it’s just inevitable. Not like a gross thing, but just you have to be different. Adapt and grow up a lot.

How do you feel about live music being back now after lockdown?

Over the summer I was playing every week for months. Our last show was at the end of February. And we haven’t played since, so it’s exciting to be back. But I also feel bad for everyone overseas… I feel so lucky. Yeah, it’s so good to be back in live music.

What do you think about Bay Dreams?

Eeesssh. Have you noticed anything in particular about being a woman in music?

It’s really interesting – you go into any professional setting and you are looked at like a child and spoken to as if you don’t know as much as you do. I know it’s not conscious, but it’s there. A lot of white boys get on lineups. You don’t get as many opportunities. You get sexualised immediately, you get hit on.

Who inspires you in music?

[Lady] Gaga, she’s unapologetically herself. I have this thing where I say sorry, all the time. I don’t know if it’s Cancerian traits…

Or it’s the patriarchy?

Ahaha. I also love Hayley Kiyoko. And High School Musical! I know every time I do an interview, they think it’s a joke. It’s not a quirk. I love musicals, and Disney Channel is basically musicals made for kids. They’ve got great songs. That’s what inspired me the most.