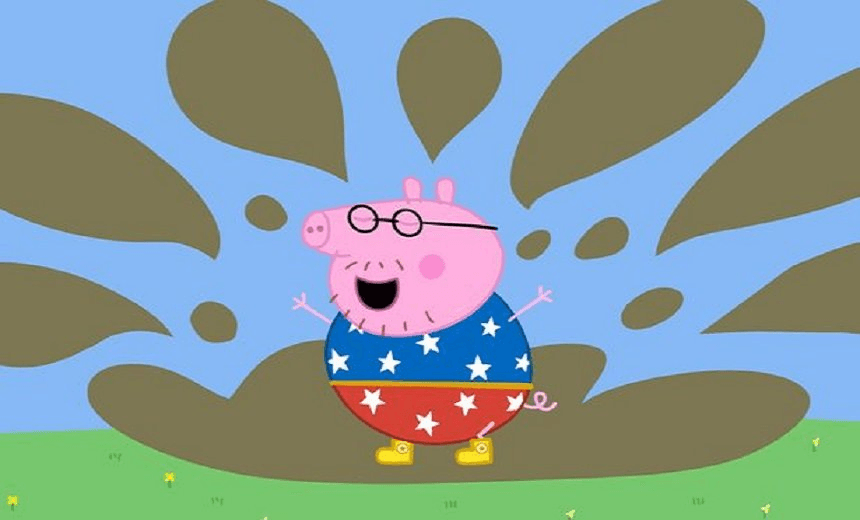 For god’s sake Daddy Pig – get your shit together

Pete Douglas tries to stage an intervention for poor old Daddy Pig, the bumbling patriarch of the ever popular kids show Peppa Pig.

Before we had our first son four years ago I was blissfully unaware of the existence of Peppa Pig, much less the intricacies of the show’s plot and character development.  This seems like a lifetime ago from my current vantage point.  Peppa Pig is omnipresent in the world of raising young children.  Regardless of whether your kid likes the show or not, someone else’s sprog is almost certainly obsessed.  Additionally, the world is full of copious amounts of Peppa-related merchandise from bags, to pencil cases – and of course, toys, including this remarkably sweary Peppa tablet.

For those of you who have managed to dodge this swine-exalting cult disguised as children’s television, here is a run-down: The annoyingly brief (as a parent what can you get done in five minutes?  Sweet. Fuck. All.), hugely popular British show centres around Peppa, a precocious, oftentimes frustratingly entitled, four-year-old piglet and her adventures with her family and multi-species friends.

Peppa lives in a nameless town in a house high on a hill (if anyone knows why all homes and significant buildings in Peppa Pig are on hills please get in touch.  Is the great flood coming?  Do these devious animals know something we and the mainstream media don’t?  This is troubling me – thanks) with her mother (Mummy Pig), younger brother (dinosaur-obsessed toddler George) and her father – Daddy Pig.

Percival “Percy” Pig, or Daddy as he is nearly always referred to in the show, is a presumably fairly well educated, upper-middle-class professional who works in an office environment as an architect.  Fortunately Daddy seems to have the opportunity to spend plenty of time with his young children – which is fantastic.  He is also portrayed as a bumbling, imbecilic, hopelessly incompetent, cake-pilfering buffoon.

Daddy Pig is the butt of numerous jokes – almost always about his weight, and more often than not is referred to by Peppa and Mummy pig as “Silly Daddy Pig”.

The ignominies in Daddy Pig’s day are numerous and crushing.  Aside from being constantly mocked for his stupidity, he is lamentably bad at almost everything that he tries to do.  This includes any DIY projects (see the disastrous photo hanging episode in which he removes the whole wall of the house), barbecuing (see the episode where he nearly burns the house down while Mummy pig is at a volunteer firefighter course. She needs her to come and save him and the family).

When not making a pig’s ear of things around the house, this poor bastard is instead being fat-shamed into oblivion.  Daddy Pig is admittedly a big bloke, but the obsession with his weight on the show can only be described as relentless.  He is bullied by the family for not being able to do more than two push-ups, told he has a big tummy while Peppa jumps on it, and mocked for not being able to touch his toes.

Worst of all the other parents get in on the act when they try to get Daddy to take part in a fun run that he clearly has no interest in.  It’s hard to know whether they are genuinely concerned about his health, or if they simply want to enjoy the mirth of watching this poor out-of-shape hog run until he passes out.

Don’t get me wrong – there are good things about Peppa Pig.  It provides some strong women role models – I mean Peppa herself is quite frankly a little shit who thinks she can call all the shots, but at least she is the main character. Mummy Pig appears as a calm and confident parent, who skillfully balances life at home with a career of her own.

However, I have to wonder what example does Daddy Pig set for modern fatherhood?  Basically he lies on the couch a lot, watches a lot of TV, shows gross incompetence in completing even the most menial of tasks, and takes all the abuse and chastising he gets from his family without complaint.  Lazy moronic fathers are a cartoon TV staple dating back to Fred Flintstone, but this is a show for little kids set in the 2010s.  Have some God damned self-respect Daddy Pig you’re embarrassing for all of us!

I guess time will tell if Peppa influences and enforces a stereotype of extreme male parental incompetence and idiocy, but in the meantime it couldn’t hurt for Daddy pig to pull himself together and not be such a doofus all the time.

Pete Douglas is an Auckland based writer stuck in the body of a corporate middle manager.  When not balancing the two he raises a pair of boys with his far more talented wife.