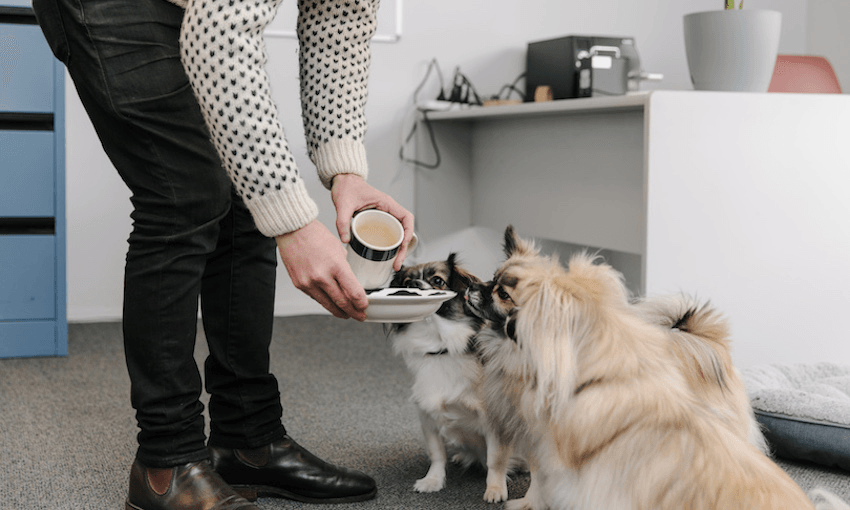 When life gives you lemons, make gravy – for dogs

First he lost his job, and then his dogs stopped eating their food. And that’s when Anthony Gardiner saw an opportunity.

A little over a year ago Anthony Gardiner was in his kitchen preparing some instant gravy. This gravy was not for a Sunday roast but for his three spaniels: Cashew, Astrid and Chewbacca.

The dogs were adjusting, with varying levels of success, to a scaled back lifestyle. Despite applying for 134 jobs in the latter half of 2020, Gardiner was unemployed. He’d just finished an MBA in sustainable tourism but had been made redundant from his tourism job as a result of the pandemic.

Suddenly, Gardiner had two dogs on hunger strike, and a third turning into an absolute chonk. Cashew and Astrid had turned their tiny noses up at the new budget-brand biscuits on offer – a necessary lifestyle change for the family – and were refusing to eat. Chewbacca, though, was happy to have their portions. As Chewbacca got chunkier, and money got tighter, Gardiner decided to give gravy a go. With a generous pour over each dog bowl, the hunger strike was ended.

Gravy, it turns out, was the answer all along. Today, Gardiner is head of The Fussy Dog Co, the world’s first instant dog gravy enterprise/empire. Cashew, Astrid and Chewbacca have taken on roles as R&D experts, and the team is on track to go global with dog gravy come November. In just two weeks, they’ll be on shop shelves across Aotearoa.

Looking to go global with your New Zealand business? New Zealand Trade and Enterprise (NZTE) wants to help you realise those international ambitions. Whether you’re exporting for the first time, expanding into new markets or looking to raise growth capital, NZTE will help you get there. It’s free and easy to become an NZTE customer – click here today to take on the world.

Gardiner was chuffed with himself after the initial gravy breakthrough, but initially felt it was too good to be true. “I thought, OK this is great, but then I looked at the ingredients and realised it wasn’t great at all. Human instant gravy is full of terrible stuff. I mean, we probably shouldn’t even be eating it,” he says.

Online searches for “dog gravy” returned nothing, so Gardiner decided to make his own.

He started with some extensive research into what’s good, and not good, for dogs to eat. This was not “Karen on the toilet kind of research” Gardiner clarifies, but a deep dive into peer-reviewed science.

With the help of the R&D team, Gardiner started experimenting with different dog-safe ingredients, flavour combos, and powdering methods. Friends he gave samples to raved about the stuff, or rather, their canines did. Some even started carrying their food bowls around.

“At that stage, I thought wow, OK, I seem to have invented crack for dogs,” Gardiner recalls. He registered the little enterprise as The Fussy Dog Co. in September 2020, sorted all the regulatory stuff with MPI, and continued to apply to tourism jobs in the background. Dog gravy, he thought, was a solid plan Z.

In December, the two jobs Gardiner was going for fell through when both companies decided to freeze hiring. That’s when he decided to give gravy life a go. “Let’s just put a batch of gravy online and see what happens,” he said to his fiancé, Beth.

With that, The Fussy Dog Co. made their first post on Chooice, an online marketplace for small Kiwi businesses. They sold out in three days. And then again in three hours. At that stage, working six days a week, Gardiner could only produce 72 jars of dog gravy. Suddenly, plan Z looked like it might actually have some real potential.

From there, business kept picking up. Gardiner spent the first few months of 2021 just trying to keep up with demand. In its first six months, 9% of people who visited Fussy Dog’s Shopify website made a purchase. “That’s extremely high for Shopify, who say anything above 2% puts you in the top stores globally,” Gardiner says.

In January a Wellington pet shop, Smack Bang, approached him wanting to stock his dog gravy. Today, Fussy Dog can pump out 2,000 jars in six days. They’ve scaled production up massively, have taken on a “3Fs – friends, family, and fools” round of investment, and will soon be stocked at 70 retail shops. Now he’s angling to get Fussy Dog into local supermarkets and wants to hit the export market by his birthday in November.

“My birthday last year was a bit of a sad-sack affair,” Gardiner remembers. “I was 112 job denials down. We were quite broke. So this year we – me and the missus – decided we want to get our first shipment leaving the docks that day, then we’ll go out to dinner. There’s so much to do between now and then, and NZTE has been amazing to work with along that line.”

Gardiner signed up for NZTE to get support on the export process. While he often says “we” when speaking of the business, it’s really just him keeping the show on the road – with support from Beth, of course, who functions as an unpaid intern/CFO. Having experts to tap into for business advice and insight has been key.

“There are a whole lot of unknown unknowns. I know, for example, what I need to do, compliance and food-grade wise, to export out of New Zealand, but what do I need to do to import into, say… Vietnam?”

So, NZTE has set Fussy Dog up with a food and beverage exporting expert who will help Gardiner sift through the complexities of international markets.

Whether it’s in New Zealand or abroad, Gardiner reckons that dogs (and their owners) will continue to take to this product quickly. “A lot of dogs are fussy eaters,” he says. “I mean if you were given corn flakes without milk, morning and night, and that’s all you ate for your entire life, you’d start rolling your eyes eventually.”

And while many dogs are fussy eaters, some have dietary restrictions, are getting on in years or are simply just jerks. “We had one customer who took their dog to the vet because it wasn’t eating, and the vet diagnosed the dog as basically just being a picky asshole,” Gardiner laughs. The gravy resolved the issue completely.

Every Fussy Dog jar features a full nutritional panel. This isn’t a requirement for pet food products, but it’s a game changer for dogs with dietary restrictions. Pugs, schnauzers – lots of “squashed-face breeds”, as Gardiner put it – have kidney issues and can’t have too much salt. Fussy Dog’s chicken, peanut, banana, and greenshell mussel gravy is low-sodium, low-fat, and was formulated with them in mind.

The most heartwarming feedback the team has received came from a woman with an elderly dog. Her dog needed to take two pills everyday and everyday it was a fight to get them down. But with a little bit of gravy, the dog would swallow the pills straight away.

“This woman said we’d literally extended the life of her dog.”

At Fussy Dog the commitment to quality is extreme. Gardiner taste tests every batch himself alongside the R&D team – after all, it’s all human grade quality.

Last month, Gardiner moved the operation from home to a quiet office park in Ōtautahi. The smell of freshly popped popcorn wafts through the space. Order some gravy and you’ll see why – the jars are delivered nestled in a bed of popcorn, which your dog can also eat.

It all feels very professional, which makes Gardiner laugh about Fussy Dog’s first days. Thinking back on Fussy Dog’s original jars – the ones that went to friends and family – he remembers an early marketing brainwave. “I felt like they were missing something, and anything without a barcode looks a bit ham-handed… I just bullshitted one to make it look more professional.” Each code was the same – his initials and phone number.

Today, the labels feature the nutritional panel, a real barcode, and a QR code. Scan your jar’s QR code, and it’ll take you to Fussy Dog’s website, specifically to photos of the exact ingredients that went into your jar. And the process Gardiner uses to get those ingredients into a powdered, reconstitutable form? That intellectual property has been secured by some of the best in the business.

The Fussy Dog Co. was born of a problem and a state of uncertainty. It’s a tale of quite literally getting lost in the sauce and emerging with a solution, scalability, and well… a whole lotta gravy.

Gardiner doesn’t think he’s someone suited to offering advice, but he does have some words of wisdom for those wanting to start a business. “Once your product is perfect, you need to market it. Once you start getting sales, how’re you going to ship it? You don’t have to solve every problem on day one. A lot of the solutions you come up with can evolve to meet growing needs, so long as they’re good enough for now.”

One thing that’s good enough for now? “These office chairs we’re sitting in,” Gardiner says. “I got nine of them for $2 on Trade Me. Nine!”

This content was created in partnership with New Zealand Trade and Enterprise.

Interested in growing your business overseas? New Zealand Trade and Enterprise (NZTE) is the government agency that helps New Zealand businesses grow internationally. Whether you’re exporting for the first time, expanding into new markets, or looking to raise growth capital, NZTE is here to get you there. Click here to learn more.