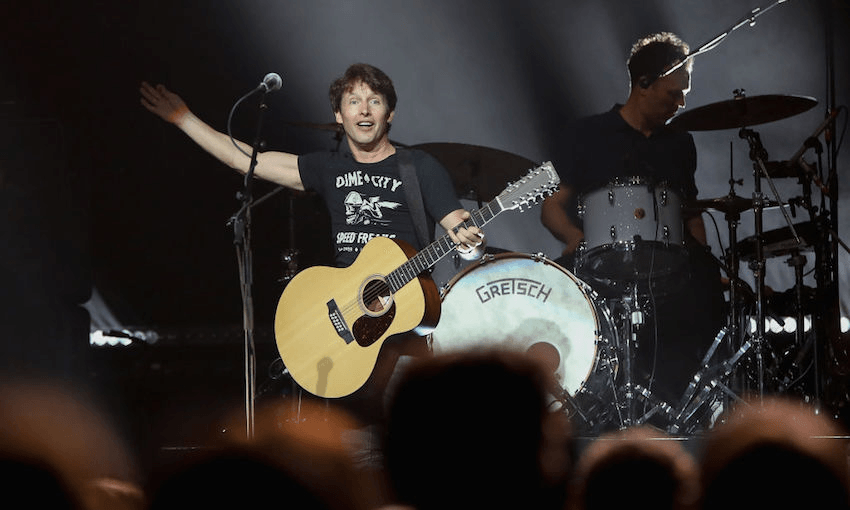 James Blunt may be a world-class entertainer but his crowd at Spark Arena last night were anything but. Madeleine Chapman reviews one of her favourite artists.

The worst part of the James Blunt concert was the crowd. The best part was everything else.

James Blunt, the man everyone loves to hate because of a song he sang 13 years ago, has released five albums since 2005 and by all accounts should’ve had a rabid crowd at Spark Arena. Instead he got the equivalent of a school assembly while the music teacher desperately tries to teach everyone a new song. The woman in front of us took a bunch of photos as soon as Blunt walked onstage and posted them to social media with the caption “I’ve waited 10 years to see James Blunt again!” I could read it because her phone was on full brightness. But then she proceeded to record, take photos, and post to social media throughout every single song that I started to wonder how much she was actually seeing or hearing.

It was so…quiet. After his first song, Blunt made a comment about the “problem area” of the crowd who’d refused to stand up. “You probably thought you’d come in, sit down, and hear me play a bunch of sad songs,” he said, articulating not what I had expected, but what I had wanted. I love James Blunt, and after experiencing the crowd last night, I might be the only New Zealander who’s actually listened to all of his albums. But I prefer his sad songs. Here’s his five albums ranked from saddest to happiest ie best to worst.

All The Lost Souls is one of my all-time favourite albums. It came out when I was 13 and had just been taught how to iron shirts. I listened to that album all the way through every Saturday of 2007 while ironing my siblings’ and dad’s shirts and trying not to gag at the BO entrenched in some of them.

I interviewed Blunt last year before the release of The Afterlove but thanks to an invisible marketing campaign, I had no idea he was performing here until a week ago. With two tickets firmly in hand, I realised no one I know likes James Blunt, which has made me seriously reconsider the people I choose to spend time with. Do I go alone or do I offer my extra ticket on social media and open myself up to be endlessly roasted? I couldn’t decide so I put it to a vote on twitter. When I checked back in half an hour later there were 42 votes and one like. The one like? THE REAL HUMAN NOT A BOT OR FAN ACCOUNT JAMES BLUNT. James Blunt had voted on my James Blunt poll but I guess I’ll never know if he wanted me to go to the concert by myself or be owned endlessly.

In the end I went with my friend Jeremy, who loved Back To Bedlam but hadn’t listened to any of the subsequent albums all the way through. Perfect. When we arrived we saw that Spark Arena had been made particularly small and the concert – all seated – would be an intimate affair. So intimate, it turns out, that the crowd felt they could sing above a whisper the entire time.

Even when Blunt sat down at the piano to play ‘Goodbye My Lover’, a song that everyone knows whether they want to or not, the crowd sing along produced abysmal results. We were sitting near the back so maybe couldn’t hear the best of it but my god was I embarrassed. I guess that’s what happens when everyone in the audience is sober and therefore not willing to scream out lyrics to everything.

Blunt handled it well, though. His banter between songs was the best of any musician I’ve seen. He’s undeniably funny and eerily self-deprecating when it comes to his music. “This is one of those miserable songs from my latest album that you’ve never heard,” he said at one point to some awkward laughs from the crowd. James Blunt is nothing if not honest.

Despite my wish to sit down and wallow in the sadness of James Blunt depression, he had other ideas. With a four-man band backing him up, Blunt added a sense of rock to his otherwise easy listening songs that worked, simply because he seemed to enjoy it so much. I loved it because I love 95% of his music, but I wondered what a more casual fan thought, so I asked Jeremy for comment. As a man who lives his life strictly off the record, Jeremy was hesitant but eventually offered “he sounded very similar to his albums which is a good thing” before adding “I’m always willing to go on the record regarding how underfunded the Department of Conservation is.” I tend to agree with Jeremy. James Blunt is about as under appreciated as the DOC is underfunded.

James Blunt has been unfairly maligned his whole career. For a funny, likeable, entertainer, he gets a lot of crap. But seeing him perform his favourite – and coincidentally my favourite – song ‘Same Mistake’ last night, I could imagine a packed stadium with their phone lights on, losing it to that ballad. And while the crowd last night didn’t boo him, he certainly deserved better.