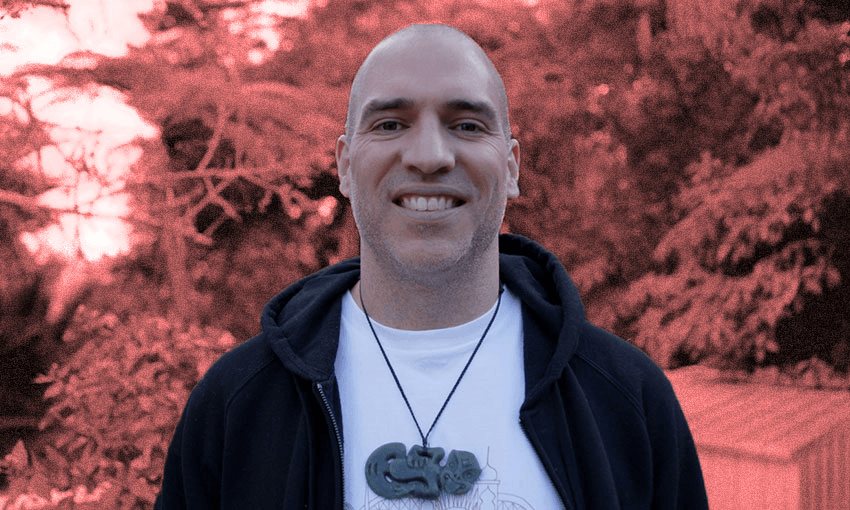 Simon Day didn’t learn te reo Māori as a child. Now a parent himself, he’s passionate about giving his sons the opportunity.

My great grandfather, Tom French, was born under a tree at Waipapa marae in Kawhia, overlooking the black sands of the town’s harbour on the North Island’s west coast. As a young man he appeared destined to line up on the back row for the All Blacks until he lost his left arm in World War I where he fought with the Māori Pioneer Battalion.

When he returned to Aotearoa he had a long and influential career as a coach and administrator in Māori rugby. Every year his legacy is recognised with the presentation of the Tom French Cup, awarded to the “most outstanding Māori rugby player”. The names on the cup include iconic All Blacks like Sid Going, Buck Shelford, Zinzan Brooke and Dane Coles.

After returning from the war Tom’s work for the government and rugby carried him first to Hawke’s Bay – where he was famous for discovering and harvesting Māori players like George Nepia – and then to Auckland. Urbanisation saw my family lose much of its connection with our whakapapa and te reo Māori vanished from our world.

I was born in the Auckland suburb of Herne Bay. I grew up in te ao Pākehā but I was always raised to be proud of my taha Māori. Tom’s story was always vivid in my mind, and I felt a connection to the Tom French Cup winners as I watched them run out for the All Blacks. But I’ve always questioned my right to claim his legacy. I didn’t speak te reo, I couldn’t recite my pepeha, I didn’t visit his marae until my late 20s.

When I talked about my Māori heritage, I’d be asked “but how Māori even are you?”. And honestly, for a long time I didn’t feel very Māori at all.

But slowly I learned that Māoriness isn’t a measurement of blood quantum, nor is it a scale based on whether you can speak te reo or perform kapa haka. It’s binary fact, defined by whether you have Māori ancestors and then by an individual desire to embrace that taha Māori. My disconnection from my family’s history and its tikanga and reo is not my fault. Nor is that disconnection something I should be embarrassed about.

I am now completely comfortable in telling people about my Māori heritage. I’ve carried the Tino Rangatiratanga flag with pride to a Māori All Blacks game, unabashed in my light skin. When I stood on the grounds of Waipapa marae for the first time and looked out over the Kawhia harbour I felt like I belonged.

The marae was empty except for a man doing maintenance. I told him I was Tom French’s grandson, assuming he’d know exactly who I was talking about. But he’d never heard of him. It didn’t matter. “This is your turangawaewae bro!” he told me.

But even as my understanding of my whakapapa has become clearer I’ve constantly stumbled at the language barrier. It feels like such an important part of reclaiming my connection to te ao Māori, but I’ve now started four different versions of beginner classes and failed to progress to the next level. I’m confident in my pepeha and some basics, but I’m no closer to having a meaningful conversation in te reo.

Learning a new language at 35 sometimes seems impossibly hard. I have a distant but clear recollection from when I was about 10 of my father – who is Australian – suggesting that as a family we should learn to speak Māori. This idea was met with groans and was resoundingly rejected by my brother and me. As an adult I deeply regret this immature decision. But it also makes me realise the opportunity I now have with my own family.

On December 26, 2019, my wife gave birth to our twin sons. Max and Freddie carry the names of our respective marae – Takitimu and Waipapa – as their middle names. We wanted their names to be the first step in reclaiming their whakapapa. (I wish I’d been brave enough to even discuss the idea of giving them Māori first names.)

The next step has been surrounding them in te reo Māori as best we can. While Lynley Dodd and Dr Seuss still feature on their bookshelf as they did on mine as a child, more than half our children’s library is made up of books in te reo.

Each morning we greet them with “mōrena!” and each night – with the help of Anika Moa – we sing them through ngā rā o te wiki (the days of the week) and ngā tae o te uenuku (the colours of the rainbow) while they bathe, and then a calming waiata before we put them to bed.

We try to speak to them in Māori as much as our limited vocabulary will allow. And we’ve already seen our vocab and understanding hugely improve as we try to guide them into the language.

There have never been more resources and more momentum to help our family on our reo learning journey. The work of people like Scotty and Stacey Morrison, and the creation of a Kiwi canon of nursery rhymes by people like Anika Moa, have allowed us to put the language in the boys’ world from the day they were born.

Tech developments like the Kupu app let us fill in gaps and have the language at our fingertips as we teach the boys about the world around them. The more vocabulary I have access to, the more I find myself deferring to te reo Māori instead of English. The Kupu app has empowered us to upskill our language on the fly while we go through the simple stages of teaching the boys the names of the things that fill their world. And it means that I’ve learned as I teach them.

I want the boys to feel like the language is theirs, an intrinsic part of who they are. I want them to grow up proud of a language their tīpuna were denied. I want to give them an opportunity to understand this part of their ancestry and embrace te reo while their brains are still pliable.

Language is an essential part of a culture’s unique personality. Te ao Māori is full of beautiful concepts I want to be a part of their life. Already their whānau includes “aunties” and “uncles” with no genetic relationship to them who have played essential roles in their short lives. We live in the beautiful rainforest of the Waitakere Ranges where kauri dieback threatens these giants of the bush, and climate change will be the biggest issue of their lives. I want them to understand kaitiakitanga and their role as guardians of the world they’ve been gifted.

I want them to be the kaitiaki of the language itself. Giving my boys the opportunity to learn te reo is not just important for them but also important for Aotearoa. The language still sits on a precipice and the more advocates it has, and the more normal it feels for young people to grow up speaking te reo, the more chance it has to survive and thrive in the face of government indifference and loudmouth haters.

The Ako series was created in paid partnership with Spark – to learn more about Kupu and to download the app, click here.