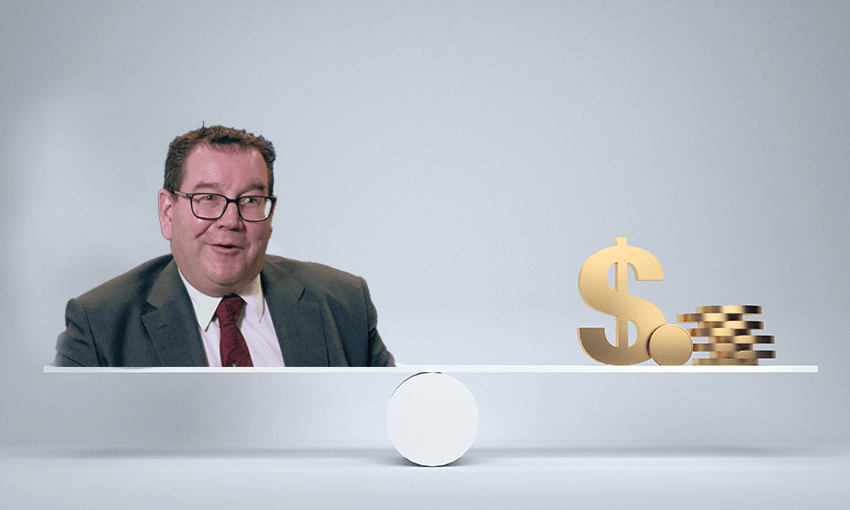 What even is a ‘Wellbeing Budget’? The Spinoff talks to Grant Robertson

This month sees a landmark moment in the economic approach of the Ardern government, with the first ‘wellbeing Budget’ unveiled. How is it different, and what can we expect? Maria Slade sits down with the finance minister, Grant Robertson

Grant Robertson isn’t Peter Jackson and the Treasury can’t do Weta-Workshop-level special effects, but the finance minister does want us to view this month’s Budget as the second in a trilogy.

Labour’s first Budget installment, 2018’s Foundations for the Future, was no blockbuster, with reviewers accusing Jacinda Ardern’s government of playing it safe. The sequel, with its emphasis on an intergenerational lens, providing social as well as economic wellbeing, comes with greater hype and anticipation.

Already the critics are out in force. Labour has been assailed for its response to the Welfare Expert Advisory Group, which called for “urgent and fundamental change” to the welfare system. It’s been told the idea of wellbeing indicators is nothing new. The administration has been criticised for its budget responsibility rules, accused of nobbling itself with its own fiscal conservatism. And it’s still licking its wounds following its abandonment of the long-promised capital gains tax.

New Zealanders are not the only ones awaiting the release of the feature-length Wellbeing Budget. Following Jacinda Ardern’s star turn at the Davos World Economic Forum, global experts have their gaze trained on New Zealand to see how it delivers on its claims of measuring the nation’s success with a “kindness, empathy and wellbeing” focus.

Roberston has been up since 4am and gratefully accepts his fourth coffee of the morning as he arrives at The Spinoff’s Auckland office. Well, technically his fourth. “I don’t count the coffee on the plane – you can’t count plane coffee,” he says.

He’s upbeat and on-point, and records a ‘five key questions about the Budget’ video in one clean take. When asked to expand on what this newfangled wellbeing budget thingy is all about he dives right in.

It’s as well he’s on message because it is fair to many are still confused. Shouldn’t all government spending be aimed at improving the welfare of the people?

Robertson settles in for the full monty explanation.

“The Budget is one aspect of the wider wellbeing approach, and I’ll say a bit more about that on Budget Day,” he begins.

“Because it can’t just be about the Budget. It has to be about the whole way the public service operates if we’re really serious about embedding the concepts of wellbeing.”

The wellbeing approach has three main elements, he explains: measures of success other than traditional economic ones; initiatives that will have intergenerational benefits; and a joined-up government approach that sees agencies contributing to common goals rather than putting their hands out for separate pots of money.

At its heart is the Living Standards Framework (LSF), Treasury’s new dashboard of indicators it will use to advise successive governments on how their policy choices affect New Zealanders over time. In addition the Ardern government is being guided by other barometers, such as its newly passed Child Poverty Reduction Act which obliges the minister of finance to report at each Budget how the country is tracking on a set of child wellbeing and poverty measures. “I’ll be the first minister of finance to do that,” he says. “It will mostly be a baseline this year against which we will report, and we’ll have to say what are the interventions we are making to improve those indicators.”

It all sounds excellent. But what does it mean?

He pulls out his prepared example. Consider the work the government is doing on domestic violence, he says. “We’ve brought together about 10 different agencies who work in different aspects of that – Police, Social Development, Justice, the Ministry for Women – and they’ve come together with a joint proposal.

“That’s different than before, we’ve always had different agencies competing for money. We’re now focused on an overall outcome and how we can get agencies to work together better to achieve that outcome.

“That does represent a pretty significant shift in terms of the way we put budgets together.”

Let’s address that capital gains tax elephant in the room. Would he, finance minister Grant Robertson, ever personally campaign for a CGT again? His answer has a strong whiff of toeing the party line.

“I don’t think so, because I believe the prime minister will be the leader of the Labour Party and hopefully the prime minister for a long period to come. I’ve expressed my personal disappointment about the CGT situation. I do believe it would have assisted the fairness of our tax system. But that’s only one way of doing that.”

There are many ways of raising funds and addressing inequality, and watch this space for more policies ahead of the 2020 election, he says.

Meanwhile the Labour government has employed new tactics to develop its top five priorities for 2019. They are:

And exactly how did it land on this quintet? “Traditionally government departments come up with ideas, they’re proposed, there’s a cost benefit analysis,” he says.

“What we did was say, ‘what is the evidence showing us what is going to have the biggest impact on intergenerational wellbeing?’”

For example, Māori and Pacific Island people are worse off than the average on virtually all of Treasury’s LSF measures except social connections. “So the evidence is saying there’s a disparity, therefore we should make that a priority. So we did.”

It didn’t rely solely on the LSF findings, however. It road-tested the material with governmental science experts and considered international evidence. “An example of that is, in the child wellbeing priority we added a specific reference to domestic violence because our science advisers said to us ‘if you really want to improve child wellbeing you’ve got to sort out violence in the home’.”

Once all that was done government ministers were asked to pony up with their proposals for influencing the top five hits.

Robertson concedes that the wellbeing approach applies only to new budget initiatives, not to business-as-usual spending on schools and hospitals and highways.

“There’s a core part of the budget that you just have to fund, and we want to apply a wellbeing lens to that but that’s a longer term project.

“Nobody should expect everything to be delivered in one budget, it’s just not possible. But we think this one will show we’re making progress.”

Labour was pilloried by opposition politicians and welfare groups alike for acting on just three of the Welfare Expert Advisory Group’s 42 recommended actions to improve the lot of beneficiaries. The group called for increases to benefit payments of up to 47 percent, saying “the level of financial support is now so low that too many New Zealanders are living in desperate situations”. Addressing the issues would cost around $5.2 billion a year, it estimated.

That’s money the government certainly does not have in the current kitty, Robertson says.

“I mean $5 billion in a single year is not something we could contemplate. But more than that, it’s about how do we manage the phases.”

It is working on 15 more of the recommendations and is committed to further implementation of the report’s findings over time, he says.

“A lot of it is about the change in the system, and that’s why one of our priority pieces of expenditure was on employing more case managers at WINZ [Work and Income NZ] to help people get back into work or training.

“There’s a classic balance to be struck between the ambulance at the bottom of the cliff and the fence at the top. What the wellbeing approach would say is you want more focus on the fence, because that’s how you make the longer term change.

“But we also recognise that those big system changes take a long time, and so therefore you still need to be providing the services as you go while you’re changing the system. From a minister of finance’s point of view it means you have to spend twice, but that’s reality.”

How the job market of the future will look is a special interest topic for Robertson who chaired the Future of Work Commission in opposition and now oversees the Future of Work Tripartite Forum between business, unions and the government. ‘Active labour market policies’ is now the catchcry, as workers adjust to a world of much greater automation, he says.

“It will be a reality for the long term for New Zealand that we need people to be constantly training and retraining. We need a much clearer strategic picture.”

He acknowledges that means spending money, and one of Labour’s first moves is its ‘fees free’ tertiary education policy.

“We’ve already started to push into that space but I believe there’s definitely more for us to do.”

A universal basic income is not on Labour’s agenda at the moment but Robertson says it’s looking at it, and time is on its side.

“There will be changes in the way we talk about income support over the next couple of decades, I’m sure of that. Exactly what the shape of that is I’m not sure yet.”

Meanwhile New Zealand needs to be doing everything it can to stimulate innovation that creates new markets and jobs, including boosting our parlous venture capital sector.

Will there be an announcement on May 30?

“You’ll have to wait,” he smiles, as he dashes out the door to his next appointment and no doubt his next long black.

All of the Spinoff’s coverage of Budget 2019 is made possible thanks to the support of Grant Thornton. Learn more about our partnerships here.