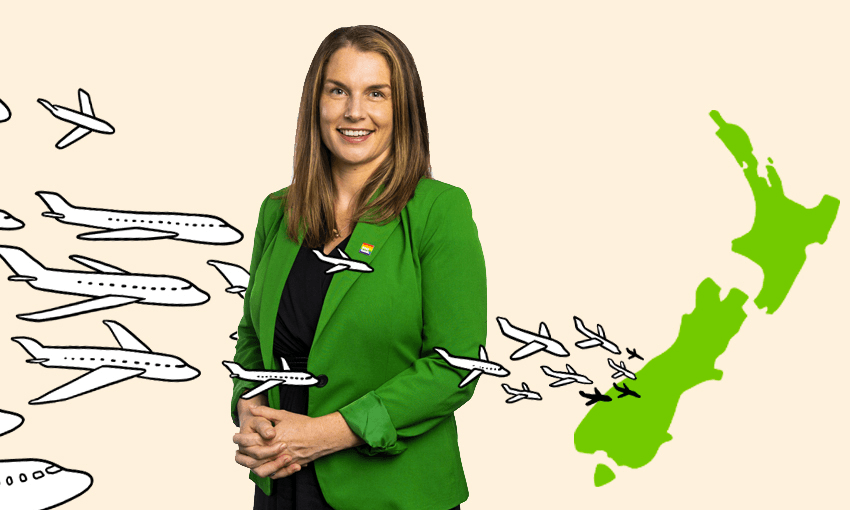 “I’ve travelled a really long way to find out New Zealand is the best place to be” (Image: Tina Tiller)

‘You notice what makes New Zealand special’: Coming home in 2020

“I’ve travelled a really long way to find out New Zealand is the best place to be” (Image: Tina Tiller)

Simon Day spoke to Charlotte Ward, chief people officer at Kiwibank, about what it was like to return to Aotearoa in the middle of the Covid-19 pandemic.

Charlotte Ward has constantly been on the move. Now, she’s found her way home and doesn’t plan on going anywhere any time soon. The newly appointed chief people officer at Kiwibank was born in Taupō, before her family moved to Chile for five years. She studied in Wellington, and has spent the last 15 years living overseas.

With a masters in organisational psychology, she’s held high-profile roles shaping the people and culture in large global organisations like BP and AIA. Now she’s part of the contingent of New Zealanders who have returned home over the past nine months. The Spinoff spoke to her about what’s changed in New Zealand, why she’s so excited to be home, and the opportunities she’s found in Aotearoa that hadn’t existed before.

Thousands of highly skilled New Zealanders are returning from overseas as a result of the Covid-19 pandemic. But why did they leave in the first place? Listen to episode one of Coming Home now.

Subscribe on Apple Podcasts, Spotify or wherever you usually listen to podcasts. New episodes arriving weekly, brought to you by The Spinoff and Kiwibank.

When did you get home?

I left Melbourne at the start of July. I started my new role in September. I was lucky to leave Melbourne before they started those intense lockdowns. We did quarantine with three small children, then I wanted a bit of time to settle back in before starting the new role.

We were put somewhere, then my second child had a cough so we got packed up in PPE and taken to Jet Park. It was at the time when everyone in New Zealand who had Covid was in there.  It felt quite intense and like we weren’t quite in New Zealand yet. It was this kind of middle place, in limbo.

But it was amazing how much effort everyone was putting into it. I think that is such a New Zealand thing, everyone was in it together. We knew it had to be done so we got through it together.

My son had his eighth birthday there, and they knew he loved Roald Dahl so they put on a special movie for him and gave him popcorn and we had socially distanced seating. It was amazing.

What were you doing before you came home?

In Melbourne I was working at AIA as the chief people officer. Before that I was in London for a really long time. I knew I wanted to come back to New Zealand. By that stage I had three kids – I came back here for maternity leave for my last child. We have a place in Mt Maunganui and we realised that we love New Zealand, and we wanted to come back.

But it was quite hard at the time to find jobs here. I ended up through connections deciding to move to Melbourne. It felt like this was as close as I could get. From Coming Home I see that other people had some similar experiences. When you’ve been overseas and done quite specialist roles in really big companies, it was hard to find a place back in New Zealand. So that’s why I ended up living in Melbourne.

Why do you think the opportunities you had around the world didn’t exist in New Zealand?

In my case, because I studied psychology I ended up quite specialised in organisational psychology doing leadership assessment and development. Because the companies are so big, you end up very specialised and doing lots of interesting global work. You can have a job just doing leadership assessment. It’s different because the size of the companies is so different. It’s apples and oranges in terms of the type of work you end up doing.

Why was Kiwibank an organisation that was able to draw you home?

I feel so lucky that when I was thinking about coming home this opportunity came up. One thing I knew after working in global organisations was that I wanted to work for a company that was really Kiwi. I wanted to bring all these experiences I had working in different places into one and do something for New Zealand. So Kiwibank was perfect. I think Kiwibank has a unique opportunity and potential and I really connected with that.

With any big organisation here, we’ve got this responsibility to be developing people in the company for New Zealand. Everybody who comes and has a great work experience and builds skills and expertise here will either stay or be released back into the community with some awesome skills and this will collectively help what we talk about as New Zealand Inc.

We are building the skills, capability and expertise of New Zealand through the work that we do, as well as our customers through financial literacy and wellbeing.

We’ve always had great vibes associated with New Zealand. When you handover your Kiwi passport you’re welcomed with such warmth. But now there’s a whole new perception of New Zealand as world class. Does it feel different coming home to that new New Zealand?

Yeah it does feel different. I haven’t lived and worked here since 2006. You notice what it is that makes New Zealand special.

In terms of New Zealand’s change since I’ve last lived here, I think te reo Māori is a really good example. I definitely recognise that I’ve got a lot to catch up on. I think the whole of New Zealand has made a big journey together, to say “yes, we are celebrating our identity and who we are”. I love that and it is different to when I left.

Compared to some of the other countries that I lived in, sometimes I get surprised and delighted by some of the differences. One of the things I’ve noticed recently is the collectivism around wanting to support each other and help each other out. That is something that has assisted in our response to Covid-19.

As I go around and rebuild my network, what I am really noticing is people from other companies or other parts of New Zealand will say to me – “oh you’re new, you’re back, how can I help you, let me tell you about my journey and share what we did right and what we did wrong”. It’s just an amazing sense of generosity and sense of spirit that I didn’t experience living in Australia or the UK. I think it makes us special and different.

In New Zealand we have a chance to think about workplace culture in the way we make space and opportunities for Māori and for a diversity of people to flourish.

One of the ways I like to think about inclusion and diversity is that it’s all about making people feel like they belong. In New Zealand we are on a good path, we’ve made great strides but we’ve still got a lot of work to do. Places like Kiwibank have a big part to play in that.

One of the things we did recently that really resonated was translating our values into te reo Māori. When I was in Hastings, which probably has our largest proportion of Māori staff, they were saying “this is great, this really resonates, and I love the way Kiwibank is approaching this in an authentic way”. That’s the commitment Kiwibank has, which, as someone coming back from overseas, feels different. This isn’t something that wouldn’t have happened in 2006.

That’s something the new New Zealand offers to people with a CV like yours. It will always be home, and now you’re seeing that home reflected in the places you work and the unique value of what New Zealand is incorporated into career paths. Culturally it’s a special place to have a job.

I’ve travelled a really long way to find out New Zealand is the best place to be. I see that every day. People keep asking me how I am, and I’m just delighted to be back. It’s been three months now so I probably need to stop doing that.