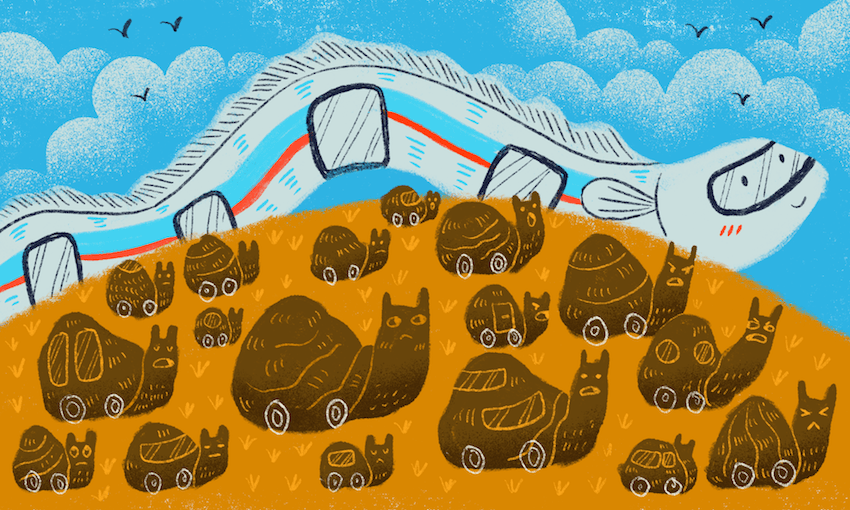 The tram system that connected all corners of Tāmaki Makaurau was torn up in favour of a car-focused transport system in the 1950s. What will it take to reverse that change?

When the Auckland Harbour Bridge opened in 1959, connecting Auckland to the North Shore, its four lanes were heralded in the Auckland Star as “a new era of city progress”. Prime minister Walter Nash hailed it as “an event of nationwide significance.”

On opening day, over 14,000 cars made the journey over the harbour, but a few breakdowns and empty fuel tanks meant within five hours of opening there was already a queue almost 10km long stretching back to Takapuna. Those first commuters wouldn’t have known, but it was a sign of what was to come.

Back then everything was focused on making transport easier for personal motor vehicles. In the 1950s the number of cars in New Zealand more than doubled on the previous decade, and by 1960 there was one car for every 4.5 New Zealanders – an ominous trend that now sees New Zealand with one of the highest rates of car ownership in the world.

In the 10 years before the bridge opened, Auckland’s 71km-long tram system was systematically disassembled. The mood at the time was very much that cars were the way of the future, says Sean Myers, WSP New Zealand head of rail and transit.

“The philosophy of the day was that people should have a car and they should be able to go wherever they want. City planners in the 50s and 60s developed an Auckland-wide motorway master plan. And now we’ve spent the last 50-60 years making that plan come to life.”

What was then considered a move to increase convenience and freedom has since become a millstone around the city’s neck. Research shows that pre-Covid 90% of trips in Auckland were made by private motor vehicle, with peak-hour travel taking up to 48% longer than non-peak – making Auckland’s the worst rush hour in Australasia.

“With the benefit of hindsight, we now know that if you give everyone the opportunity they’ll buy a car. And then they’ll buy two. And then, if you make cars cheap, they’ll get a third one. So everyone’s driving their own cars, motorways are clogged, and the city’s absolutely gridlocked,” says Myers.

After years of talking about public transport solutions to some of the congestion, cost and environmental issues that come with such high car use, plans are underway for the reintroduction of light rail to our biggest city. But what will it take to fit a successful light rail system into existing infrastructure? And with the city’s population projected to grow to over two million within the next decade, will it work in the long term?

So what does light rail give us that a robust bus or train system won’t? For starters, it provides an ease of access that other options, like underground heavy rail, often does not.

“You think about your quintessential European [light rail system] … one of the key things is that they’re at street level, so people can easily get on and they can easily get off,” says Myers.

That kind of seamlessness encourages both commerce and community. A look at the Auckland tram map from the early to mid-20th century shows the impact that transport infrastructure had on the way the city is still laid out today. Trams ran down all the streets that are still considered main strips decades on: Great North Road, Dominion Road, Manukau Road.

“Where you once might have only had enough people to warrant a small number of shops or other commercial activities, you now have enough movement of people to justify many more. This lets entire precincts emerge – creating economic value for the whole community.”

But there are some considerations that come with this increased development of the light rail corridor. Avoiding land grabs and protecting housing and population diversity are both important to ensure the light rail is serving more than just those who can afford to live near it. And this can be achieved with the right regulations.

Angus Gabara, WSP New Zealand client director of rail and transit says the authority in charge of the Vancouver SkyTrain in Canada saw this potential problem, and so put in place guidelines for potential developers for development along the rail corridor.

“A lot of SkyTrain stations are designated as city/municipal centres, each of which has their own development guidelines and bylaws. Some require that housing around the stations includes an affordable component.”

An investment of this size doesn’t make sense if it’s only serving the communities who are already advantaged by the current transport system, Gabara says. “If you’re largely benefiting those who already have a range of transport options, then you’re leaving behind people who potentially need it the most.”

Another drawcard of light rail over bus and heavy rail systems is the speed at which stations can be serviced. Chris Reid, WSP UK deputy group director, says personal vehicles are popular because they’re often the most convenient option. For public transport to be successful, it needs to prioritise convenience too.

“If a bus comes every half hour or every hour you know that you’ve got to [plan for that] in your journey. If they’re every six minutes, you don’t. You just go and get the next one that comes, and that convenience makes a huge difference.”

Reid has worked on many of Europe’s most successful recent light rail projects, like the NZ$1.4bn Edinburgh Tram Scheme and the Odense Tramway in Denmark. He says one of the biggest challenges for any government undergoing a large-scale infrastructure project is ensuring everyday people are onboard – and that’s often not easy.

When the Edinburgh Tram Scheme was being built, the city was already well-known for its comprehensive bus system, but Reid says that system was not future-proof, and communicating the importance of diversifying public transport options was crucial in getting people to back the developments.

“Yes, Edinburgh has got the second-best bus system and bus network outside of London, but that’s only going to last until the buses can’t move any more on the street. Then people will complain that it’s the worst bus system in the UK. So it was explaining that this tram that’s being built now is not for now, it’s for 10, 15, 20 years down the line.”

Recently released Auckland Transport plans to remove parking on 3.25% of the city’s roads over a decade have been met with strong opposition from business owners and road users, despite being on the relatively light side of what public transport advocates had hoped for. That reaction shows that the debunked idea that car parks equal customers is still very much alive.

In reality, studies have shown that removing parking spaces in exchange for public transport and pedestrian space doesn’t harm business, and in many cases actually helps it. With a successful light rail system, our city’s arterial roads could look far more like the people-friendly streets we see in some European and UK cities.

Light rail also has the potential to bring us far closer to the 20-minute city model, where all Aucklanders can access their needs easily, quickly and locally.

Effectively communicating the benefits of light rail with residents is just one crucial part of the puzzle to ensure a smooth transition into a more public transport friendly Auckland.