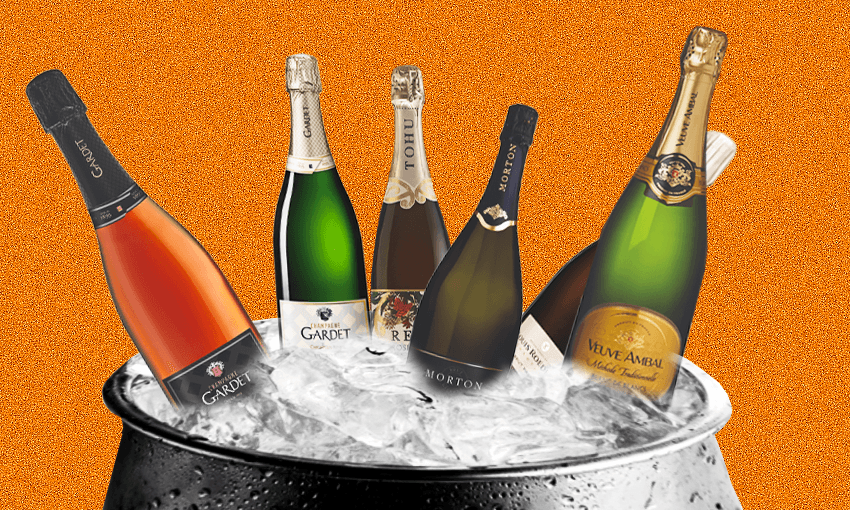 Get your summer on ice ASAP (Image: Tina Tiller)

Poppin’ off: The Spinoff’s guide to summer Champagne and sparkling wine

Get your summer on ice ASAP (Image: Tina Tiller)

With crisp notes of family, the beach and Christmas, a bottle of bubbles is much more than just a drink, it’s a moment. The Spinoff staff share their favourite memories and recommendations for Champagne and sparkling wine.

My wife’s birthday is right in the middle of December and it often gets buried in the festivities of the silly season. I have to go to extra effort to make sure it’s special. We’ve created little traditions to ensure it gets the recognition it deserves and every year we go to our favourite restaurant to celebrate.

One year, when she was not yet my wife, I wanted to make her birthday extra special. So before we went out to dinner I suggested we sit in a park near the restaurant and knock back a cheap bottle of red to save some money on the bill – something very on brand for me.

She reluctantly agreed. But little did she know there was actually a bottle of champagne in the brown paper bag and an engagement ring in my pocket.

But when I popped the expensive bottle of French bubbles, and poured her a glass (it was a red plastic cup if we’re being honest), her nerves started to calm, she started to warm to the idea, and eventually agreed to spend the rest of her life with me.

The Louis Roederer Brut Premier NV is that type of bottle. This Champagne can make a special occasion memorable. The elegant and subtly savoury expression of the Louis Roederer house style is the perfect way to celebrate massive life moments.

This weekend we will be back at our favourite spot to acknowledge another year in the books, and this birthday also includes a celebration of surviving 11 months with twins. I might have to pack champagne flutes for our ceremonial park bench bubbles this year.

I was in my mid-20s, had just begun my first proper job and recently started going out with a woman who I was super into. I also had no idea how to convey that, because I was in my mid-20s and had no history of being the kind of sophisticated, worldly man I was desperate to present as.

So I did what any phoney 20-something dude would do and booked a dinner at Antoine’s, the venerable pioneer of Auckland white tablecloth fine dining in Parnell. It was essentially a disaster – I was nervous as hell and had no idea how to be in that environment, their vegetarian options were extremely limited (it was the mid-00s) and when the time came to spend my whole pay cheque on the bill, the maitre d’ looked at my Eftpos card with horror. Antoine’s famously (though not famously enough for me) didn’t accept Eftpos. I had to run a nearly a kilometre round trip in early summer evening heat to get more cash than I’d ever held to pay the bill. It was intensely humiliating, though my date only saw the funny side of my hapless attempt at being fancy.

The only good part of the night was drinking my first (and so far only) bottle of Bollinger, which I recognised from Absolutely Fabulous. I remember it as creamy and perfectly balanced. Last night I had another bottle of Champagne with the same woman, to whom I’ve now been married for 10 years. It was a Gardet, the official Champagne of the Élysée Palace, home of the French president; it also has a special connection to English institutions like the Lords cricket ground and the House of Commons. It was dry and nutty and super refreshing. We drank it at home watching The Office, and it made an otherwise unremarkable evening feel special and even a little romantic, a rare and worthwhile thing this deep into marriage and kids.

Allegedly, sparkling wine should evoke tasting notes like “stone fruit”, “fine flowers”. Maybe “oak”? I don’t know, I’m making this up. But to me, the true tasting notes of sparkling wine are things like family, summer, beach. Not because that’s what it tastes like – that would be gross – but because those are the memories that a good bottle of bubbles brings.

Nothing denotes a good Kiwi Christmas more than sitting on the beach, the hot sun beating down on you, surrounded by family and friends, and with a nice glass of something fizzy. The Gardet Brut Rosé is perfect for this time of year; it’s fruity, fresh, and, above all else, incredibly drinkable.

I first had the Tohu Rewa Methode Traditionnelle Rosé back when I was the editor of Mana magazine, as a celebration of a particularly difficult issue going to print. As good bubbles are wont to do, it raised my spirits immensely. It was crisp and citrusy; I’m convinced very fine, creamy bubbles have a direct line to some kind of happiness sensor in the brain. It smelled like freshly picked strawberries. But that day it also made me think about something else, namely what the whānau of Te Tauihu have overcome to produce something so sophisticated. The theft of their land, the small reparation in the form of a Treaty settlement. And they’ve taken those small returns and through Tohu wines, built lives for hundreds of whānau on their ancestral lands and put that same care into a delicious vintage that holds its own with the best methode and, dare I say it, Champagne.

I’ve since bought Rewa Methode for every special occasion that demanded bubbles. Not just because it’s delicious, and not just because the bottle is itself a work of art (does anything exemplify an Aotearoa Christmas better?), but because it’s ours and that’s the best celebration of all.

This year was the first time I figured out how to properly open a bottle of bubbles. I’ve always loved sparkling wine, but I was terrified that I would break something in the house when I open it, or worse, shatter the bottle of wine I’d spent my hard-earned money on. When lockdown hit, I resolved that I would learn because god knows I wasn’t going to go through months of social isolation without treating myself to some bubbles. It turns out, it’s ludicrously easy.

Coming out of lockdown knowing how to properly pop a cork made me realise I haven’t been enjoying sparkling wine to its fullest extent. Not even close. Opening a bottle of sparkling wine should feel like a moment, like starting a sentence with an exclamation mark. The pop, the brief shudder of the bottle, the ever-so-slight chance of it foaming and the scramble to get it into the glass.

Morton Estate Black Label Methode NV is a sparkling wine that matches the thrill and the exhilaration of opening it. But while the pop lasts an instant this local sparkling hangs about – nutty, persistent, dry. It’s wine that makes me not just happy, but relieved, that I learned how to properly pop a cork.

December is the one month of the year when I want to (responsibly) drink nothing but bubbles. Like Simon’s wife (see above), I too have a December birthday, which – combined with Christmas and summer and New Year’s and hopefully getting some time off work – means I take a break from my beloved beer and adopt an all-the-fizz-all-the-time philosophy.

But a month is a long time, and December is already an expensive month, so an affordable sparkling is key to making this extravagant pursuit a reality. There are some excellent-value New Zealand bubbles out there, but the beauty of a bargain French fizz is it makes you feel fancy at the same time as feeling frugal. As far as I’m aware, Veuve Ambal is no relation to Veuve Clicquot (veuve just means widow), but telling yourself and your peers that you’re quaffing Veuve – and you’re not even fibbing! – adds a certain je ne sais quoi to those festive December vibes.

This content was created in paid partnership with Fine Wine Delivery. Check out their comprehensive selection of festive bubbles here.