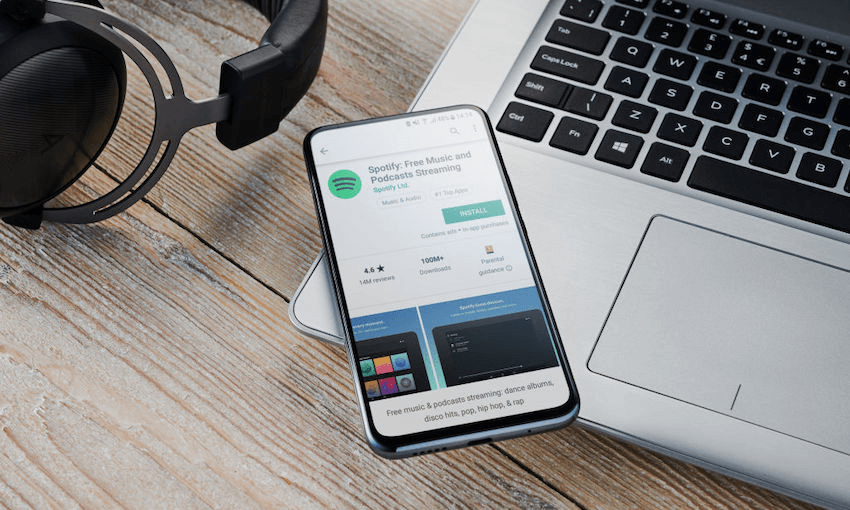 How music algorithms know your taste better than you do

In the fifth episode of Actually Interesting, The Spinoff’s monthly podcast exploring the effect Artificial Intelligence has on our lives, Russell Brown discovers that maybe AI has better musical taste than humans.

I am a middle-aged man and suddenly my music streaming service works a whole lot better than it used to.

There’s a reason for that, and it’s the decisive tilt that Apple made a few months ago towards algorithmic playlists on Apple Music. Having branded itself on the virtues of human curation – it’s only a year ago that Apple CEO Tim Cook lamented the dehumanising effect of Spotify’s data-driven approach to curation – Apple seems to be acknowledging that maybe Spotify has it right.

New Music recommendations have improved markedly under this personal robot curation – like I’m getting what an algorithm thinks I’d like, rather than what someone thinks I should like. But the playlist that’s really working for me is Favourites Mix, a rolling weekly selection of things that I have loved (and sometimes forgotten) at some point in the past decade or more. Apple knows what I have loved because for all that time I’ve been telling it, by uploading Genius data from iTunes to the mothership. Apple had a lot of data to push my buttons with – it just finally got around to using it. It’s great.

It’s an example of the power of the aspect of AI we see most in popular culture – the recommendation algorithm. That science is getting serious in 2019 – and its new face is TikTok, the micro-video platform that helped brew ‘Old Town Road’ into a global mega-hit. It’s one of a dozen products made by the Chinese company ByteDance that are basically branded AI recommendation engines. And it’s really, really effective.

As Jia Tolentino put it in a fascinating recent New Yorker feature headed How TikTok Holds Our Attention: “Some social algorithms are like bossy waiters: they solicit your preferences and then recommend a menu. TikTok orders you dinner by watching you look at food.”

So what’s actually going on here, on a technical level? And what else might ByteDance be cooking up in its AI Lab? According to Juan Swartz of the Christchurch-based tech company 4th, it’s a mixture of established machine learning practice and some special sauce.

“You use an evolutionary process by which you select the bots that have the most predictive validity. You then introduce random mutations into the algorithm, and you don’t know and the bot doesn’t know the outcome of that. You run it in millions of iterations and you end up with an algorithmic model that you don’t know exactly how it works, you just know how it works.”

Being able to amass that “huge amount of data” is a matter of having a lot of humans to watch – TikTok has 600 million users watching more than a billion videos a day – and logging everything you possibly can about what they do: taps, swipes, comments and the musical and visual events associated with them.

“They analyse everything about it,” says Swartz. “They analyse tone, they analyse colour, they analyse beat. How long is spent on it, the audience demographics, and what content and what colours, etc, appeal to different groups. And that analysis is massively valuable for anyone that wants to market anything.”

TikTok’s content, of course, is partly created by its users, in the form of derivative works: super-short videos set to snatches of music. AI is at work on that side of the operation too: the app will learn how users like to work and present creation and editing tools accordingly.

DRM New Zealand, the country’s largest digital distributor, is in the business of feeding some of the 50,000 songs it represents into the back end of a variety of digital service providers that now includes TikTok. Does that mean not only thinking about what the audience likes, but what the algorithm likes?

“It depends on the platform,” says DRM’s general manager Andy Low. “Because every platform out there has different types of algorithms in how they serve content to their users. What’s happening in the streaming music platforms with their playlisting real estate is likely fairly different to what’s happening on YouTube in an audio-visual space.

“We are doing our best to understand how these types of algorithms work in order to get a better gauge of what’s likely to be effective in these spaces. But having watched these platforms grow and develop and studied these things over years now, you get a gauge of how it works, but then it all changes so rapidly that you’re trying to read this endless book that never stops.

“The algorithm isn’t just one thing, its many different types of things combined. Feeding the algorithm is something we do, but it isn’t the primary motive for releasing or pushing music.”

It’s no great leap of logic to guess where this is all headed. If you need a hint, bear in mind that this year ByteDance acquired the British company Jukebox, which makes AI technology that creates music itself.

“At some point in time the machine will become better at entertaining people than other people are,” says Swartz.

That may have been foreshadowed by what Spotify got caught doing in 2016: seeding its playlists with tunes it commissioned (from a couple of humans) and owned. And it may already be happening now.

“I would imagine that’s the logical extension of where this technology will all lead to if it hasn’t already,” says Low. “There’s certain patterns and structural formulas that we see in certain genres of music that would be programmable, for artificial intelligence to learn how to make. With studying what’s been effective in the last 12-18 months, pulling all these different metrics and data points together and reconstructing tings that should be pleasing.

“I would say though that if you’re just going to be constructing music from an automatic method, it’s likely to lose that creative flair that really can make music so special and exciting. So even if there’s just AI making music that ticks certain boxes for certain types of listening experiences, to me I don’t think that’s a threat of taking over music as a whole.”

Yet right now, ByteDance’s rival Tencent (also Chinese, also deeply invested in AI, already owns the majority of China’s digital music services) is negotiating to acquire a 10% stake in Universal Music, the world’s largest record company. It’s hard not to see this as the beginning of a potential new paradigm in a media sector that typically sees change first.

Music was disrupted by the internet before most global businesses and continues to experience change in its fundamental structures and assumptions in a way that you pretty much have to be inside to fully grasp. But bear in mind that ByteDance launched with and still operates a news aggregator and it’s pretty clear that other sectors would be well-advised to watch what happens in music.

But for people who make music, perhaps the rule is still going to be: just make the music that you want.

“From an independent distributor’s perspective, absolutely,” says Low. “We represent emerging artists, established artists, all the artists that are making this music, because they want to, they love to, they need to. Regardless of what AI may be doing in the music space, artists should just carry on making the music they want to make.”