Adopting an animal-free diet in 2021 is not nearly as hard as it was even two years ago. Now even the most meat-centric eateries are finding delicious ways to cater to the growing demand for alternative proteins.

About two years ago I went vegan. While the transition from vegetarianism – I’d stopped eating meat two years earlier – wasn’t too tricky when I was cooking for myself, there were some obvious setbacks if I decided on a night out.

But in the last couple of years, vegetarian and vegan options at mainstream eateries have been multiplying. Many fast-food vege burgers now exist to satisfy late-night junk food cravings, and fancier sit-in restaurants are becoming more aware of the need to cater to vegetarians. The days of the lonely-afterthought mushroom risotto are thankfully coming to an end.

The number of New Zealanders who are vegan or vegetarian is steadily rising. In 2015 only 5% of New Zealanders 18+ were always or mostly meat-free, but in 2019 it was over 15% according to the Sustainable Business Council’s 2020 Better Futures report. The number of people reducing their meat consumption is also on the rise, with one third of New Zealanders saying they’re making an effort to eat less meat. A recent survey undertaken by The Spinoff and UMR suggested the trend was even more prevalent among our audience, with close to 60% of Spinoff readers eating less meat now than they were a year ago. With all of that considered, it’s no wonder that more and more companies are taking up the challenge of creating meat-free food that’s just as convenient and delicious as its cheesy, meaty counterparts.

The transformation isn’t just about more companies offering vegetarian dishes alongside their meaty fare. Most fast food providers have been doing a vege option for decades – usually by replacing a meat patty with a portobello mushroom and calling it a day – but these days the choices are diversifying as creations like Beyond Meat and Chicken-free Chicken enter the market. 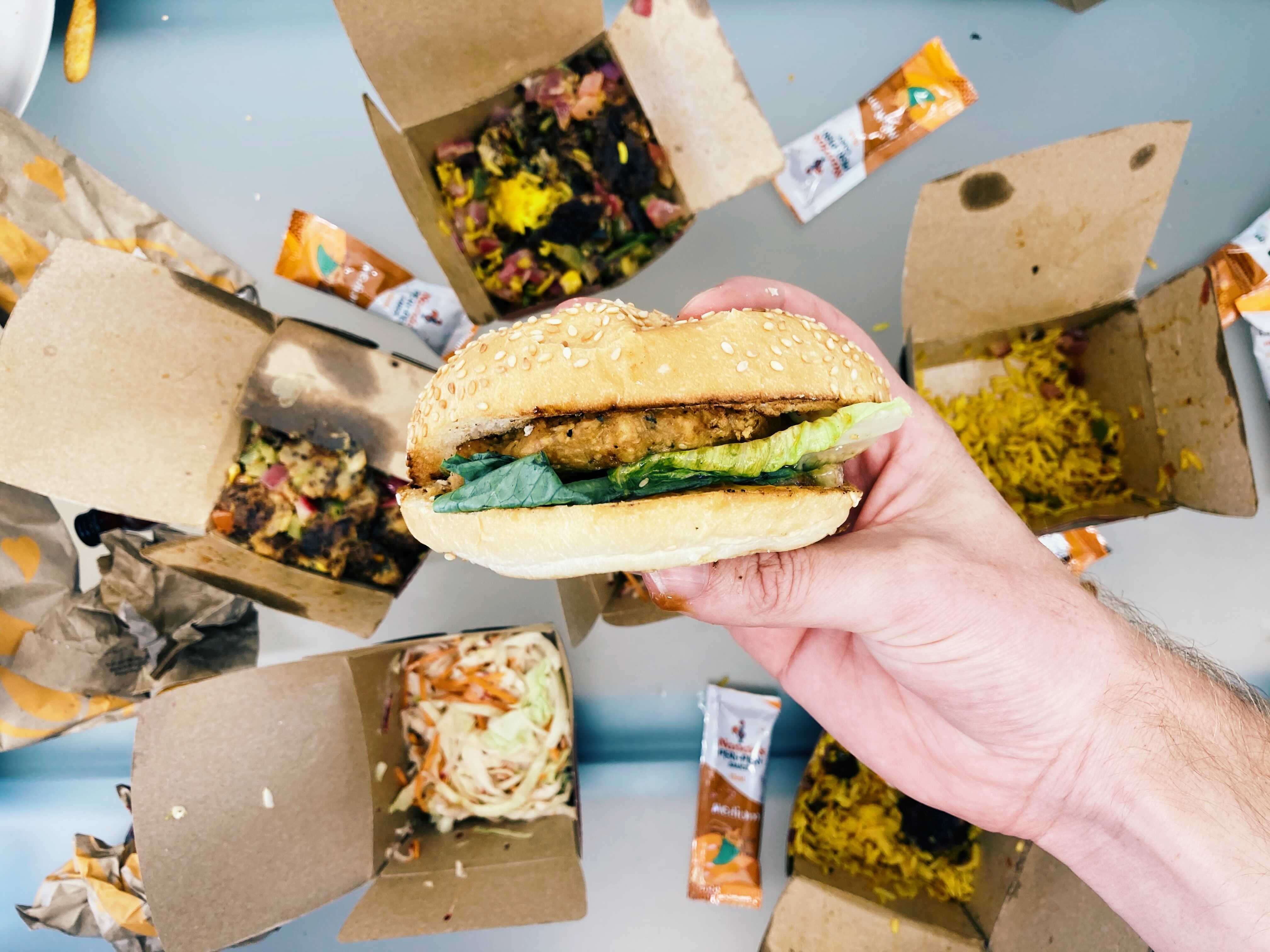 Nando’s is among the New Zealand chains to recently introduce a plant-based-protein offering. While the chicken restaurant has offered a vege patty for a while, the team thought it was important to give customers the option of a more protein-rich meat-free option.

“We know that more Kiwis are experimenting with flexitarian eating with some completely switching to a plant-based diet,” says Helen Reece, chief marketing officer for Nando’s in Australia and New Zealand. “We wanted to create a substitute that is high in protein and still has Nando’s well-known peri-peri taste, but was plant-based.”

There’s a Nando’s right around the corner from where I live, and my partner Tom is not, despite my best efforts, a vegan yet, which means it’s a common dinner in my household. Previously I had survived off the vege patty wrap and a big bag of peri-peri chips while Tom would indulge in a box of juicy free range thigh pieces, cheesy garlic pita bread and maybe a chocolate mousse to finish. While the vege patty is tasty – a spicy, crispy falafel-like texture, made with a range of beans and pulses – being able to order a meat-free “chicken” burger that feels as substantial as the real thing is a game changer.

The Nando’s team worked for two years on their “Great Pretender” chicken-like patty, proving their dedication to creating a meat-free option that wasn’t just an easy way to please the herbivores among us. For Reece, making the Nando’s menu as inclusive as possible is a clear priority.

“We have a saying at Nando’s that ‘everyone is welcome to dine at our table’, which means everyone who walks into Nando’s should feel like there’s some delicious and tasty options for them on the menu.

“We did quite a lot of sensory testing to make sure the product was just right and we’re really happy with how it turned out. It has a very similar texture to a chicken patty, including texture, colour and juiciness, and even caramelises and smells like meat when being grilled.”

For Nando’s, the change isn’t just in their menu, but in their dedication to reducing the footprint of every meal. In 2018 the restaurant introduced free-range chicken and eggs, and Reece says that increasing plant-based options is another way the team at Nando’s is reaching for their environmental goals.

“We have a responsibility to do our bit when it comes to the environment and combating climate change. That’s why we’ve set ourselves the target of halving the environmental impact of a meal by 2030.”

The numbers speak for themselves – in just one week of selling the new “Great Pretender” patty, Nando’s distribution centre almost ran out of stock.

While a more plant-based lifestyle can be a lot better for the planet, the idea that vegetarian and vegan food needs to be health-focused is being challenged. Vegan fast food, burgers with slatherings of vegan aioli, deep fried onion rings and fries are becoming just as much a plant-based staple as any kind of kale salad.

The point is, people who choose to eat plant-based don’t do it to restrict their options. Not eating meat doesn’t mean we don’t want the delicious proteins, fuss-free takeaways and full bellies meat eaters have always had. Now, with restaurants getting onboard the meat-free train, we’re able to have all of that goodness, too.

This content was created in paid partnership with Nando’s. For more info about the Great Pretender and to order online, click here.