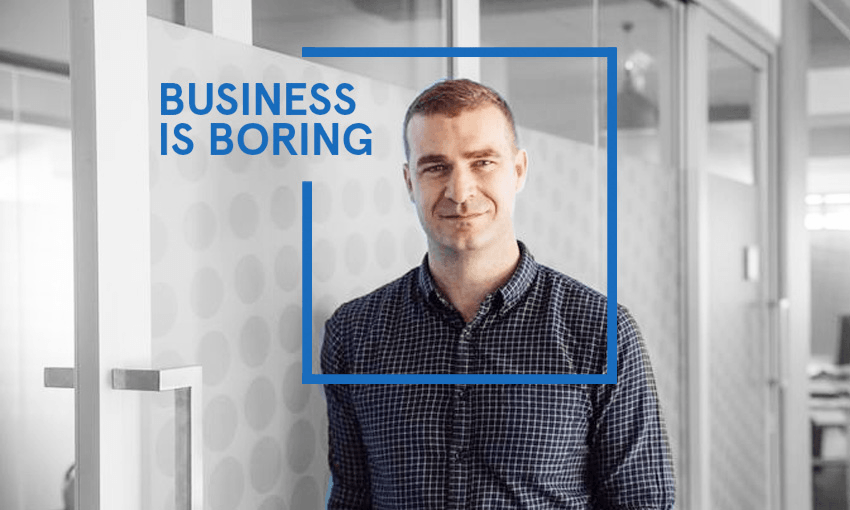 Business is Boring is a weekly podcast series presented by The Spinoff in association with Callaghan Innovation. Host Simon Pound speaks with innovators and commentators focused on the future of New Zealand, with the interview available as both audio and a transcribed excerpt. This week Simon talks to Hadleigh Ford of SwipedOn.

If you’ve headed into an office lately and had to sign in using an iPad, there’s a very good chance you were using technology from a New Zealand company that jumped up onto the radar late last year. SwipedOn is the visitor management software company that hit the media with an unusual capital raise.

It had quietly gone about bootstrapping its way to USD 1 million of revenue, and was out to raise a million to grow faster with some very impressive metrics. Their offer was quickly oversubscribed. They’ve attracted a first class board, they count big names like Cat, Mobil and Hugo Boss as clients, are heading to 20 staff with the bulk in Tauranga and growth all over the world.

Things are going gangbusters, and in amongst it all CEO and founder Hadleigh Ford found out he had a rare cancer and successfully went through operations and recovery. It’s come a long way from his start on superyachts, where he saw the hole in the market for an electronic logbook. To chat that journey, the idea and what’s important, Hadleigh joins us now.

What did you have to do to go from idea to being able to engage in a development company and how did you take that step?

I was a pilot in the South Island, in Timaru. The tech community is pretty small there and I think I know all two of them. To be honest I googled it. One company had better SEO than the other and I chose them and I was probably a bit naive but in a good way. You don’t want to overthink these things sometimes I believe.

I had a couple of meetings with the development company, got a spec together and we went from there.

So how did you get a spec together? Did you think back to the super yacht? I imagine on super yachts you’d seen some pretty famous names signing some pretty scrappy books.

The beauty of the iPad being portable is if you knew the crew, visitors, contractors coming on you’ve got it all there in case of an emergency, and in terms of the marine industry that’s obviously very important. I had some general ideas about it but I just kind of replicated an in/out board and replicated a visitor book. Whereas now the tech is at the forefront, we’re not trying to emulate a book so to speak.

So I went back and forth with the designer of that company right through to the pretty designs but I also leaned on them quite a bit.

Was it just aimed at the yachting or marine industry at this point? Was it hyper-focused?

I wouldn’t say hyper-focused but that was definitely the area where I knew it would work and during the processes of building the product and speaking to people they said ‘oh, this could work in my office’. There are so many mistakes made from A to Z and I’m probably still only at G now, but one of the initial ideas was that it was primarily a crew and employee in-out based application.

Once it was live, I put it out on the app store, essentially a lot of feedback, from the people who were using it was fantastic, but where the market was and where the downloads were was people wanting a visitor book replacement.