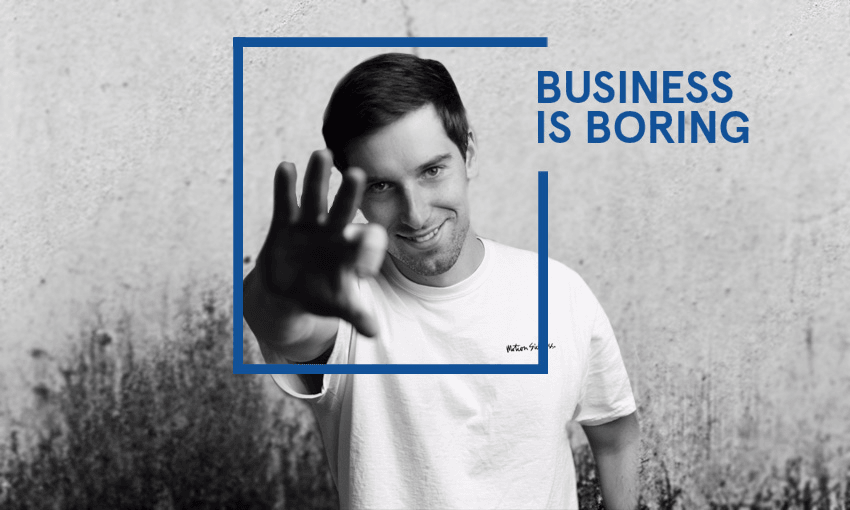 Business is Boring is a weekly podcast series presented by The Spinoff in association with Callaghan Innovation. Host Simon Pound speaks with innovators and commentators focused on the future of New Zealand, with the interview available as both audio and a transcribed excerpt. This week Simon talks to Sam Stuchbury, the only Kiwi who made this year’s Forbes 30 under 30 Asia list.

This year there was one Kiwi in the 30 under 30 Forbes Asia list. It’s a big honour – past Kiwis on the list include people like Lorde, Parris Goebel and Beauden Barrett. This year our entry was the lead of a dynamic creative agency that in the few short years since being founded in his last year of uni has gone from a home operation to working for some of our biggest brands.

You would have seen their work even if you don’t know it. When Rogue Society changed to Scapegrace they turned to them. Maybe you’ve seen video for Les Mills International. Or Blunt Umbrellas spots following you around on Facebook.

Along the way our guest has been involved in making a book, Hideaways, and had a hand in founding social influencer agency The Social Club. The agency is Motion Sickness, and the founder is Sam Stuchbury. He’ll be talking at a PWC Herald Talks event about how you ignore Generation Z at your peril. Your peril! To talk the journey, Sam Stuchbury, joins us now.

How did you and your flatmates go from the idea to actually getting up and giving it a crack?

Our first job was actually for the university. We started how a lot of people do – music videos and a lot of that stuff to start with and then the university hit us up to do some stuff. That developed into us doing some work for Dunedin tourism, which was really great for us to cut our teeth in our style, then our first big break was when we were moving up to Auckland and Diane Foreman from Emerald Foods got in contact.

She’d seen some of our stuff and asked us if we wanted to do the social content and strategy for their brands, so that was New Zealand Natural, Movenpick, Killinchy Gold, so that was a big breaking point for us to have a decent go at a bigger brand in Auckland and be more involved than just producing a video.

How did you get an intro to Diane Foreman, one of our most successful businesspeople?

She actually, funnily enough, saw one of our videos on Facebook, so I guess that’s a big thing is people often ask us how we grow our business and what our strategy is, and the nature of our work is just that lots of people see it so we focused on making good work and more people see it and hear about us.

She literally just saw a video on Facebook and got in touch so it was a stroke of luck.

That was one of the first jobs that you were also looking after the media buy* as well.

The days of having a separate media company – doing a video and then palming it off to a media company and they would do all the media buy – to me that was flawed and I think that’s the space that we’re working in. When you’ve got this creative, for us the media buy and the strategy behind it is so tied into what you’ve produced and so specific as to what you want to achieve that sometimes it can miss the mark when it’s not controlled in the same space.

Our intersection is the creative strategy, often the social media and digital, and then the media buy and how all of that works together.

So when you went and did that for Diane Foreman’s companies, did you say ‘we should take it all’ or did they just want it all done?

They didn’t really know either. It was quite an organic thing. We just assumed that was done. None of us had ever worked at another agency and I think that’s been a positive for us is that we’ve never gone in with a pre-conceived idea of how things are traditionally done and the processes or bureaucracy and a lot of the red tape that makes it hard.

It made sense. We were doing the content and the social, we should probably just do the media as well because we understand it. We just kind of did it. That’s been a bit of our approach.

*The buying of the ads.