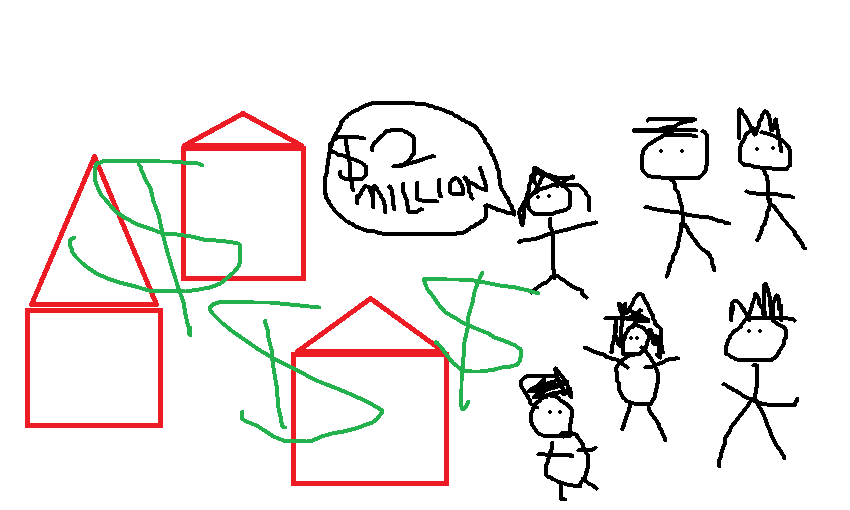 Experts have made the case for tax and interest rate adjustments to address the housing crisis in recent times. Hayden Donnell makes another, highly technical suggestion.

There are as many ideas for fixing New Zealand’s housing crisis as there are houses in New Zealand. Political advisor Clint Smith has proposed limiting the tax benefits extended to large-scale property investors. Finance minister Grant Robertson and Reserve Bank governor Adrian Orr are sending each other highly normal, non-threatening letters on how they could adjust monetary policy to stabilise property prices. Prime minister Jacinda Ardern has proposed a CGT and other solutions, but has so far been severely let down by a New Zealand public that’s just not brave enough to do the right thing.

These are all interesting ideas. Some are worthy of further investigation. It’s easy though to get lost in the excitement of tax rebates and interest rate adjustments, and lose sight of the thing that would arguably make the most difference to our chronic house shortage: building more houses.

The case for building more houses is quite technical, but here’s how I believe it would work.

1. We currently have a shortage of around 100,000 houses. This leads to many people competing over very few houses, driving up prices.

A lot of people will call this solution unworkable. Some may say it’s far-fetched. But what if I told you there are places where affordable housing already exists? In Japan, house prices are stable even in cities like Tokyo, mainly because there are few barriers to dense construction. Closer to home in Christchurch, construction has increased following the 2011 quake. It has avoided the worst of the recent house price death spiral, facing off both the Reserve Bank’s stimulatory policy and its gangs of wealthy local suburbanites who don’t want poor people living near their leaves.

Some of our cities have tried “building houses”. In Auckland, the Unitary Plan enabled a record number of new dwelling consents in the year to November, despite councillors shielding “leafy” cityside suburbs like Herne Bay from all but the barest hint of a townhouse. The government has promised 8000 more public and transitional houses. In this article, I propose doing that stuff, but more.

This could be achieved by a series of small, but significant, steps. The first is taking a huge sledgehammer to the legislative kneecaps of the most anti-housing bodies in the country: local councils. Our councils are all captured to varying extents by cartels of Nimbys who fear buildings more than three metres tall. These groups’ vision of an ideal city is a grove of perfectly preserved villas, with thousands of young people begging for shelter on the multi-hectare lawns outside. It’s difficult to reduce their influence, given voter turnout in local elections skews toward villa owners and villa-owning-adjacent people, and most councils are culturally predisposed to set fire to all their principles and carefully designed strategies as soon as someone murmurs a complaint.

Last year the government found a way around those obstacles, signing off on a revised national policy statement forcing councils to allow dense development near rapid transit, and eliminating minimum carparking requirements for new buildings. Unfortunately the NPS is open to council interpretation, meaning it could take four years to implement plan changes. The government could get around that by using the same tactic to enforce even broader, automatic upzoning, insisting councils allow three-storey houses in all urban areas as a default condition, unless there’s a good reason why that shouldn’t be the case. Councils could be given a year to work out which zones should be exempt, but their ability to weasel out of enabling development would be limited. Planners could be seconded to do the work.

Maybe at some point Robertson and Orr will find a perfect interest rate that protects jobs and economic growth, while ensuring house prices don’t rise. Maybe Auckland Council will get kicked in the head by a mule, realise owning 13 of the city’s 39 golf courses during a housing crisis is perverse, and convert some of that land into housing and parks. Maybe the government will enact some tax adjustments over Act and National’s howls of protest or find the capacity to expand its state house building programme, even if only to cover all the people currently on the waitlist for a state house. Maybe it will one day *stares grimly into the middle-distance* reform the RMA.

It could enable more housing within a matter of months, without incurring the electoral costs it finds so terrifying. Speaking to TVNZ on Monday, Ardern said she was looking at a range of options to address the housing crisis. “It’s not just about planning, it’s not just about incomes and deposit and it’s not just about lack of supply, but actually we do need to be doing things on all of those fronts,” she said.

Doing things on one of those fronts would make more of a difference than the rest. The brightline test could be extended to 50 years, first home buyers could be offered extra financial assistance, and Robertson and Orr could send each other thousands more letters. None of those moves would affect people as meaningfully as allowing apartments and medium-density developments near the hearts of our biggest cities. If Labour wants to make a real difference to the housing crisis, it could start by legalising the types of homes we need.