The Labour government is painting budget 2021 as a “fiscally responsible” plan for Covid recovery that allows public debt reduction from the mid-2020s. It set the scene this week by cancelling $926m of Covid spending plans, freezing most state sector wages and shelving big transport projects to start reducing debt within two to three years.

But finance minister Grant Robertson is falling into the same austerity trap triggered in 2011 by Bill English when he launched his “zero” budgets of 2011, 2012 and 2013 too soon after the Global Financial Crisis and Christchurch earthquakes. The return to austerity and “keeping a lid on debt” successfully reversed the trajectory of public debt and squeezed the size of government down from 35% of GDP to 30%. But this premature tightening forced the Reserve Bank to run lower interest rates for ever longer over the last decade. That, in turn, increased house prices and forced the Reserve Bank to tighten lending restrictions.

Exactly the same thing is happening again, despite the change of party in power and Labour’s rhetoric about improving wellbeing in the long run. It is choosing debt reduction over a much more concerted effort to reduce child poverty, improve housing affordability and invest in climate emissions-reducing infrastructure. 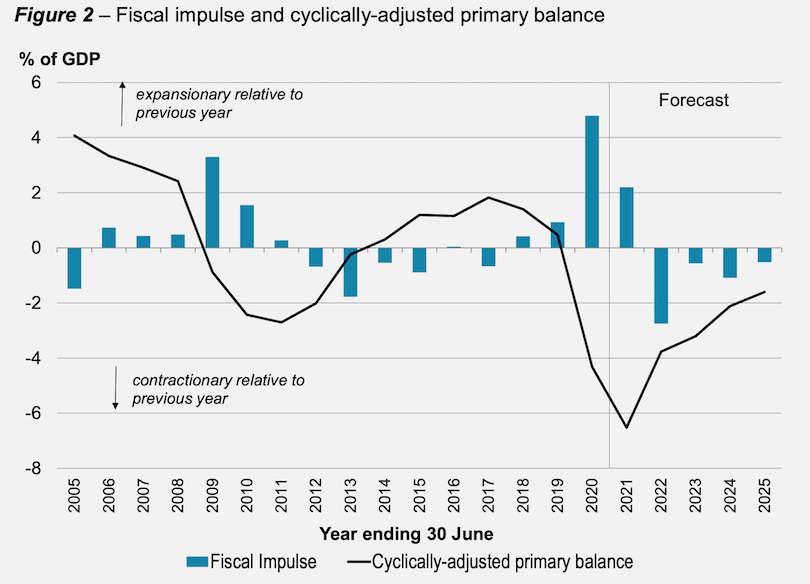 What is the political strategy behind this toxic fiscal and monetary combination? High house prices and low mortgage rates are much more comforting to median home-owning voters than big chunks of “their” taxpayers’ money being spent on the undeserving poor and on railways and buses they believe they’ll never use.

This week Robertson made a rash of announcements the confirmed the government’s pivot to austerity, and the Reserve Bank, in response, reiterated it is preparing, in response, to further tighten bank lending rules to prevent lower-for-longer interest rates pumping more yet more credit air into the housing market. The perversity is Robertson is directing the Reserve Bank to try to improve the housing market’s sustainability (by an as yet unspecified concept), but the government itself is contributing to this by running fiscal policy too tight and not firing up the inflation needed to normalise interest rates.

That was evident in Robertson’s pre-budget speech on Tuesday to the Wellington Chamber of Commerce, in which he trumpeted $926m of Covid recovery spending “reprioritisation” and repeated his core message about “keeping a lid on debt”.

“Our fiscal objective as outlined in the budget policy statement remains to stabilise debt by the mid-2020s, and then reduce it as conditions permit,” Robertson said, although in saying this he also emphasised just how much headroom the government had to use its balance sheet if it wanted.

“Even at their elevated levels our debt position is significantly better than almost every country we compare ourselves too,” he said, pointing out debt servicing costs at less than 1% of GDP was no more than pre-Covid levels.

“On an internationally comparable basis of general government net debt that is produced by the IMF, New Zealand’s current levels of net debt are slightly below 22% of GDP. This is less than half of Australia’s level of close to 49%, and some way away from the United Kingdom at 97% and the United States at 109%.”

Subscribe to When the Facts Change on Apple Podcasts, Spotify or your favourite podcast provider.

So why not use it to achieve the wellbeing goals?

But Robertson pivoted repeatedly in his speech and in yesterday’s announcement of a pay freeze for most public servants to the need to “restock the savings account just in case there is a rainy day”.

“As a small economy subject to external shocks, it is sensible that we look to reduce our public debt as the economy returns to full health,” he said in the pre-budget speech.

“As the recovery gets under way, we are keeping a close watch on the debt taken on during Covid-19 to support the economy,” he said in announcing public servants earning over $100,000 a year would not be paid extra for another three years and any increases for those earning $60,000 to $100,000 would be exceptional. Only those earning less than $60,000, which is just 25% of public sector workers, would receive pay increases.

“Just as businesses are making decisions as they plan for the recovery, our responsible economic approach means the government is faced with choices about where new spending is targeted,” he said.

This language of austerity is awfully familiar

Bill English made similar noises in 2011 when he announced the first of three “zero budgets” with no increases in new operational spending allowances.

“This budget is about investing in our future,” English said with his second “zero budget” speech of 2012, which reaffirmed his aim to be reducing debt within three years.

“It shows the government is responsibly managing its finances. We are on track to post an operating surplus in 2014/15, when we will start bringing debt down to prudent levels,” English said then.

The then National government also announced and delivered public sector pay restraint at the same time, arguing it needed to keep inflation down as the economy got closer to full capacity. It also wound back or refused new big spending on infrastructure, including holding back on funding the City Rail Link and squeezing capital spending on hospital and schools.

This helped the Reserve Bank reduce its official cash rate to 2.5% in 2011, which surprisingly at the time (but not in retrospect) fired up the housing market again. The Reserve Bank was then forced in 2013 to introduce loan-to-value ratio restrictions, which it progressively tightened until 2017 as interest rates were cut progressively ever-lower to 1.75%.

This tight fiscal policy of 2011 to 2015 and the lack of investment in new infrastructure to underpin new housing supply meant the Reserve Bank had to keep interest rates lower than it otherwise would have, and then tighten lending restrictions to stop the housing market soaring even further away.

Last year’s rate cuts to 0.25% and the brief removal of LVRs unleashed the pressure underneath the market, triggering an almost immediate 20% jump in prices.

So here we are again

The government is tightening fiscal policy, forcing the Reserve Bank to tighten lending rules because interest rates are remaining lower for longer.

The Reserve Bank said yesterday it was looking at further tightening its LVR rules and potentially introducing a debt-to-income multiple limit. It downplayed a limit on interest-only lending, but is still looking at that too.

What is actually needed is a burst of inflation that allows interest rates to normalise and take the pressure off the housing market. Instead, the government wants to have its low-interest-rate-and-high-house-price-cake and eat it too, keeping median voters happy and waving at the Reserve Bank to “do something” to stop asset values rising too fast.

This perversity was emphasised yesterday in job and wage figures showing annual wage inflation of just 1.6% in the March quarter. Yesterday’s wages freeze for public servants will further drag down on wage inflation, extending the period of low interest rates.

Meanwhile, the government is looking at delaying or shelving public transport projects because of higher construction costs, and refuses to deliver anything like the $5b a year in extra benefits to reduce child poverty recommended by the Welfare Experts Advisory Group. The extra infrastructure and benefit spending should not be a problem, given the ample debt headroom, but the government’s preference for debt reduction over investment ensures the delays.

This rinse and repeat of the austerity strategy is also in stark contrast to what is being seen overseas, where even conservative governments are choosing to invest in benefit and infrastructure spending over debt reduction.

Australia’s Liberal-National coalition decided this week to abandon its debt-reduction strategy and focus on reducing unemployment by running deficits for longer.

America is firmly focused on reducing child poverty dramatically with big cash payments and by spending 10% of GDP on infrastructure upgrades.

Yet a Labour government here is worried firstly about debt reduction, where our debt is about half Australia’s and America’s is four times larger. A perverse and brilliant outcome if you are a property investor.

Bernard Hickey hosts When the Facts Change, a weekly podcast exploring the intersection of business, politics and economics in Aotearoa. Subscribe and listen on Apple Podcasts, Spotify or your favourite podcast provider.