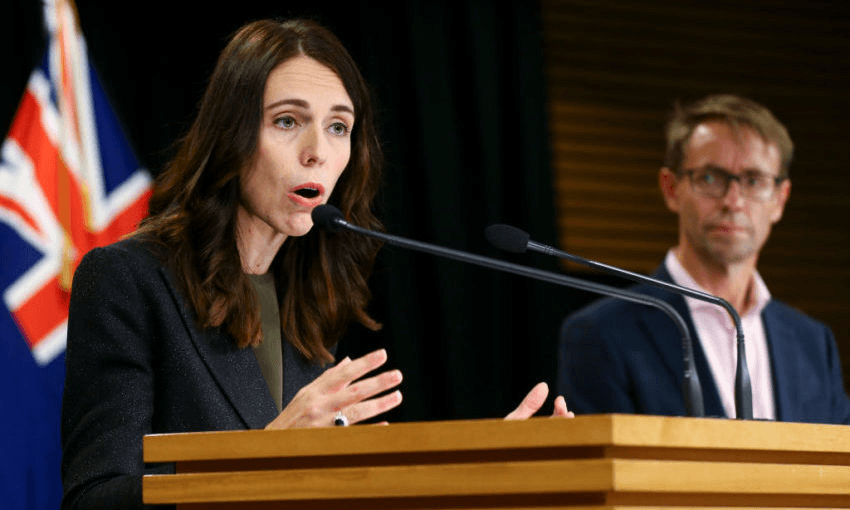 After 101 days without any reported community transmission in New Zealand, cases without any link to overseas travel have been reported.

Auckland will go into alert level three as of noon tomorrow, for a period of three days, until midnight on Friday. The rest of the country goes into alert level two. It follows four cases of community transmission of the coronavirus in one family.

The news was announced by the prime minister, Jacinda Ardern, and the director general of health, Ashley Bloomfield, at an emergency Beehive press conference this evening.

“We have not yet been able to determine the source of these cases,” said Ardern. There was no apparent link to any isolation facility or person travelling from overseas.

What does “Auckland” mean? It covers the Super City region, Ardern explained, covering Wellsford to Pukekohe. Travel to and from the Auckland region will also be prohibited, apart from those returning home. Details on police checkpoints will be released in the morning.

For Aucklanders it means most workplaces, schools, restaurants and public places will be closed as of noon tomorrow. Pharmacies and supermarkets will remain open.

The cases emerged after a man in his 50s tested positive for Covid-19 in Auckland. More than one workplace is involved, said Ardern, spanning more than one suburb in south Auckland.

“While we have worked incredibly hard to avoid this … we have also planned for it,” said Ardern.

Ardern said she would change her plans and remain in Wellington for the next three days. Beyond that, “I’m not going to speculate at this time. We’ve set out a plan that should give us more information on which to base future decisions.”

The news reached Ardern at 4pm today, she said. The decision to take the lockdown action followed the failure to identify any links to the family that might permit an isolation and quarantine solution.

Bloomfield was informed via text at 3pm.

He said it was “a wake up call against any complacency that may have set in”. Authorities had been preparing for some time for a community case. He urged people to follow guidelines including hand-washing, physical distancing and mask wearing. Testing would be scaled up and people encouraged to err on the side of caution as far as testing is concerned.

People in Auckland will be asked to wear masks when they access essential services. In the rest of New Zealand, masks should be used where physical distancing is difficult, like public transit.

“We’re expecting to see other cases, and as was the situation earlier in the year we want to find other cases and identify and isolate any contacts,” said Bloomfield.

He said he was confident that Covid-19 had not remained undetected since before the last lockdown.

The man twice tested positive in the Auckland region after being swabbed yesterday. Three members of his family tested positive, while three others tested negative.

The man is understood to have had symptoms for five days. He is currently being interviewed by Auckland Regional Public Health.

All close contacts will be tested and will remain in self-isolation for 14 days.

“Please stay at home and be vigilant, we will get through this,” said Ardern.

Ardern said she spoke to the leader of the opposition, Judith Collins, as well as the mayor of Auckland earlier this evening to advise of the planned course of action. She said she had given no consideration at this point to any postponement of the election.

National leader Judith Collins said the opposition will focus on getting answers out of the government. “New Zealanders can be assured that National will be seeking an explanation and clear answers about the situation we now find ourselves in,” she said in a statement.

The Labour Party and New Zealand First have announced the immediate suspension of their campaigns. National said it has only cancelled tomorrow’s events.