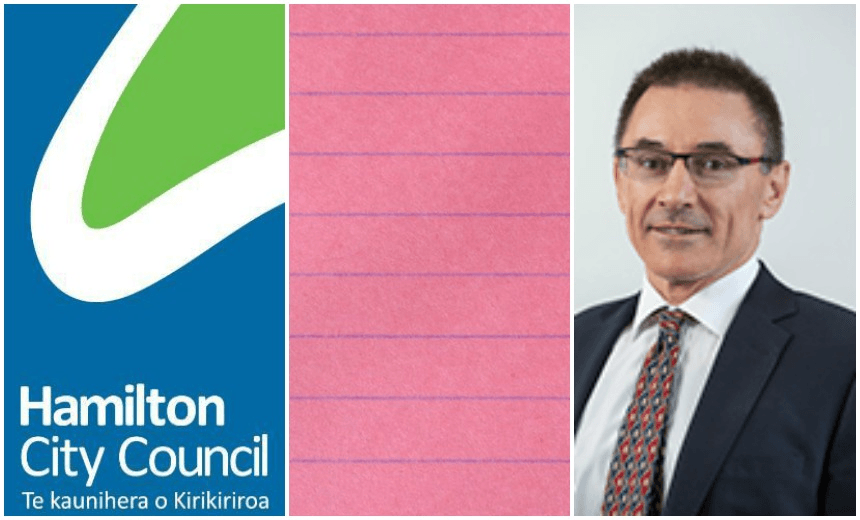 Hamilton City Councillor Garry Mallett is the subject of a formal complaint over allegations he used the words ‘fags’ and ‘homos’ while on council business. But he has defended any use of such terms, and warned the Spinoff against getting ‘sucked into this politically correct vortex’, reports Angela Cuming.

A Hamilton City councillor accused of using homophobic slurs during a council meeting has told the Spinoff that while he cannot remember saying ”homo” and ”fags”, he is comfortable with the words nonetheless, and they would have been a “light hearted jest”.

Cr Garry Mallett, a former president of ACT New Zealand, is the subject of a formal complaint over allegations he made the slurs last week.

It appears Cr Mallett used the words after taking umbrage with the use of pink-coloured paper in a printed council agenda.

”What’s with the homo colour in our agenda?”, Mallett is alleged to have said to two female council staff members.

The complaint also says that, when challenged by a fellow councillors about the nature of his language, Cr Mallett replied: ”[are we looking after] the gays and fags now?”

This is not the first time Cr Mallett’s choice of words has raised the ire of his council colleagues, and it is understood Mr Briggs himself has previously been made aware of concerns about Cr Mallett’s language both inside and out of the Council chamber.

Cr Taylor described some of Cr Mallet’s questioning of council staff at a strategy and policy committee meeting as ”unnecessary, petty and verged on bullying with a clear intent of embarrassing staff”.

”I would expect someone with some degree of decency and human sensitivity to realise he’s going too far and to tone things down,” Cr Taylor wrote.

Mallett continually ”embarassed and brutalised” staff, Cr Taylor said, and it was a sad indictment on the leadership of the Council that he was allowed to get away with it.

His fellow councillors were too ”punch drunk” to keep fighting Cr Mallet, he said. ”Garry Mallett should be reined in. Has anyone on our present council got the guts to do it?

When contacted by The Spinoff, Cr Mallett said he did not recall making the comments in question.

”But if I did, I’m comfortable about it,” Cr Mallett said. ”Many homosexuals” used and identified with the words, he said.

”If you have any contact with the homosexual community in New Zealand you’ll, of course, know that many homosexuals happily refer to themselves and/or their organisations as ‘pink’, ‘gay’, ‘fags, ‘homos’, ‘rainbow’ etc,” he said.

He went on to say that pursuing the issue was to become “sucked into [a] politically correct vortex”.

Cr Mallett was the fourth president of ACT New Zealand, from 2006 to 2009. During the 2005 general election campaign Mallett was heavily criticised for making a vomiting gesture during a discussion about homosexuality.

Sounds like the “I’m not important unless I’m offended mob” are in your ear Angela.

To be honest I don’t recall making the comments, but if I did, I’m comfortable about it. It will have been a light hearted jest about our meeting moving into the confidential portion (ie public excluded) in which the agenda papers are coloured pink. We often refer to this as “moving into the ‘pink’”.

If you have any contact with the homosexual community in New Zealand you’ll, of course, know that many homosexuals happily refer to themselves and/or their organisations as ‘pink’, ‘gay’, ‘fags, ‘homos’, ‘rainbow’ etc. (Actually they seem to add new names and words every few months so it gets bloody hard to keep up with it all).

Many homosexuals freely and willingly identify with these words. Indeed, to some extent, homosexuals have “commandeered” these words such that many non-homosexuals feel uncomfortable using them. Take the word “gay” for example. A few decades ago the word “gay” denoted a “delightful, happy light heartedness”. But say the word “gay” now-a-days and, for most people, “homosexual” is the first thought that comes to mind. The old-fashioned meaning has sadly all but faded from our vernacular.

I guess you’ll be well aware that in Iran they murder homosexuals by shoving from high rise buildings. If you (or anyone) is truly offended by the treatment of homosexuals I suggest you/they hop on a plane to Teheran and sort them out. Let me know how you/they get on with that Angela.

This is very much a situation of “sticks and stones may break my bones but words will never hurt me.”

Angela, it’s unfortunate you’ve been sucked into this politically correct vortex. We really need to smash through this debilitating/suffocating “political correctness” which is crippling our society. We have many big problems to deal with – time and energy spent on these wild-goose chases really is wasted.

More on Hamilton City Council on The Spinoff: