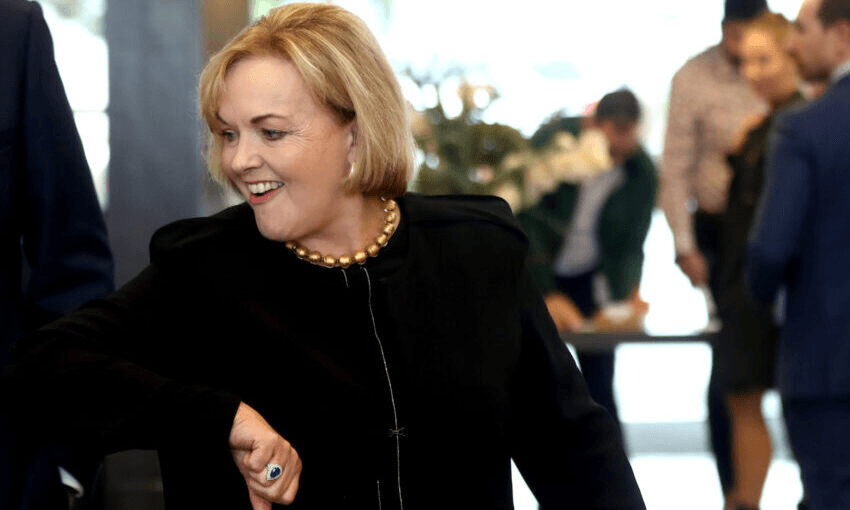 National’s new leader made her first big appearance in front of a crowd today, announcing her party’s $31 billion infrastructure policy. What got the biggest applause?

It was standing room only (due to a lack of seats) at Judith Collins’ big policy address in central Auckland this morning. After a week of turbulence within the National Party, and a fortnight of scandals and upheaval, this was Collins’ big chance to put her stamp on the party – with a speech originally written for Todd Muller.

If you removed all of the Auckland-based National MPs, candidates, devotees and media from the conference room at Beca, you’d have been left with a relatively small crowd of middle-aged business types.

Here are the four policy announcements that saw them raise their excitement above polite murmuring into full-blown applause – ranked in order of enthusiasm.

Building rail to Auckland Airport (but not light rail)

For reasons I can’t quite explain, National hates light rail but loves a train. Collins today proclaimed that “light rail will be to the 2020s what monorails were to the 1980s”. So while Phil Twyford’s so-called “ghost trains” were the subject of several digs from National today, a key part of its plan involved expanding Auckland’s rail network and building a rail link out to the Airport from Puhinui and to Onehunga.

Much like the current government (and perhaps to intentionally draw comparison), Collins threw about the word “transformational” a lot during her address. Eight times, to be exact. While the possibility of a heavy rail extension out to the airport certainly could be seen as transformative for a city that lacks a quick connection to its main gateway, it’s nothing new. In her speech, Collins said it’s been touted for decades.

I’ve already written this week about how Judith Collins loves talking about the RMA; a subject that is most often confined to law school lecture theatres or the wings of parliament. Yet, scrapping the RMA got a massive response from the white-collar crowd. It’s effectively the cornerstone of the opposition’s plans to expand Auckland and tackle our housing crisis. Collins said reforming the act wasn’t suitable (it’s already a mammoth 800 pages) and her party would replace it with two separate, more fit-for-purpose statutes.

Her transport spokesperson Chris Bishop rejected concern that totally eradicating the RMA could cause further problems for Aucklanders, by removing certain protections. Bishop said, from his experience talking to Aucklanders, that they just “want progress on projects”.

“Frankly, [Aucklanders] have spent the last three years watching a government obsessed with a slow tram down Dominion Road.” He said while the government’s been focused on light rail, it’s ignored delivering on projects that Aucklanders want.

Collins joked that she’d like to burn the 800-page piece of law in a rubbish bin when it’s been replaced.

It’s no surprise that revoking one of the incumbent government’s most controversial policies would be on the agenda for National’s 2020 election hopes. It’s been talked about by all three of the party’s leaders (yes, there have been four) since the last election. According to a report released at the start of the month, Aucklanders are paying up to $140 million more each year at the pump. Collins pledged to the crowd today that the fuel tax would be totally abolished.

However, while promising to not increase or add new taxes, new road tolls form a significant part of National’s funding plan. Collins batted away criticism that tolling is rogue taxation because “there’s an alternative in every case”.

“People don’t have to use the [toll] road, they can use the existing road.”

One of the main elements of today’s mega policy push was the idea of being able to get from one side of Auckland to the other in a timely fashion. Collins said National will be managing its progress on delivering rapid transit in the city against the goal “of 30 minutes to get to work and one hour to get across the city”.

For more detail on today’s announcements, check out the Live Updates here