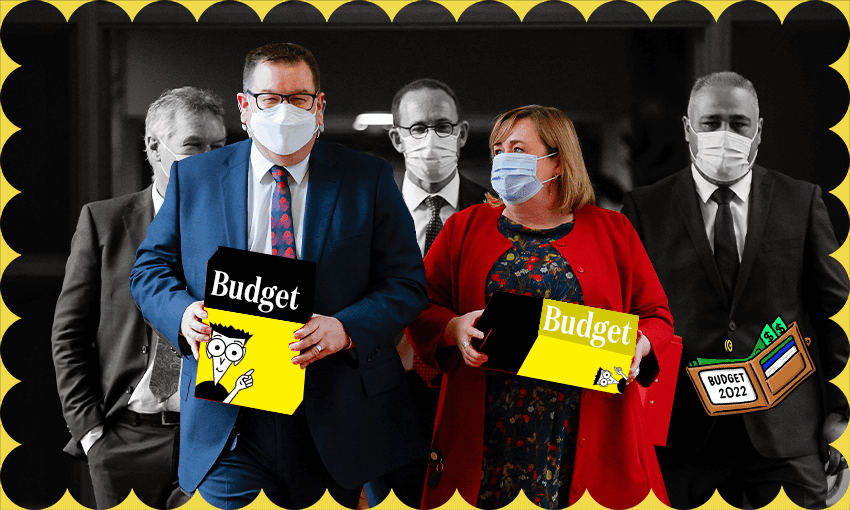 Budget 2022: Sick of hearing about the budget? Same! Here’s the bare minimum you need to know, and nothing more.

Yes! Unless you live in a bubble, you’ve probably heard a few whispers about it lately.

Actually, I’ve been trying to avoid it.

Well, you shouldn’t. It’s kind of an important day. Some of the decisions made by finance minister Grant Robertson for government spending across the next 12 months will almost definitely affect you.

How much money are we talking about?

What! Six billion?! Where does all that money come from?

You. Every dollar you earn is taxed, and that tax contributes to government income. More can come from borrowing and increasing debt, but that will need to be paid back, and that money will also come from you. A budget is a chance for the government to show you how it’s going to spend everyone’s money across the following year and beyond.

That sounds like a lot of math. So what’s inflation got to do with it?

It’s high. At 7%, it’s higher than it has been for three decades. Robertson doesn’t want to do anything that sends it even higher.

So what’s he decided?

Do you want the good news or the bad news?

Give me the good news first. I can’t handle any more bad news right now.

If you earn less than $70,000 a year and don’t receive the winter energy payment, you’ll receive an extra $27 a week in a temporary cost of living payment. Up to 2.1 million New Zealanders will receive it. Also, halved public transport fares have been extended for two months through to August. If you own a community services card, those savings are permanent. And there are going to be more first home loan grants.

That’s all well and good, but I haven’t been feeling that great lately. Is anything being spent on health?

Yes. Almost a third of this budget’s spending is being spent on health initiatives. The DHB is getting its debt wiped, Pharmac is getting more money to spend on cancer treatments, and there’s some (though far from enough, critics say) heading towards Māori health services. Emergency dental grants have also been increased, from $300 to $1,000.

Anything else I should know?

Lots! There are climate announcements and emissions decisions and education upgrades and community housing initiatives and the supermarket duopoly. Bernard Hickey knows all about this sort of stuff. You can read his expert analysis here or listen to him chat about it with Toby Manhire here.

OK, so what’s the bad news?

Probably all of the alliteration. Opposition political parties predictably panned Robertson’s plans. National Party leader Christopher Luxon called it the “backwards budget”, then Act Party leader David Seymour countered that by calling it the “brain drain budget”. At least no one described it as “banging” or “bonkers”. But it’s probably coming.

Are the country’s major media outlets being chill about all of this?

Not at all. Most are running live blogs and updated coverage with extensive graphic packages not seen since Tonga’s underwater quake. RNZ played a Weezer song as it headed into its budget coverage. NZ Herald ran a homepage headline 28 words long. Stuff’s homepage image included Vladimir Putin. TVNZ even turned the finance minister into a cartoon masterchef as if he was unveiling his latest tasting menu.

At least no one actually depicted him as Dr Evil, but it’s early days yet. Expect coverage to run across the weekend, and beyond.

What if I don’t like the things the government is spending all of my money on?

You’ll get a chance to vote them out and give someone else a go. The next election is happening later next year, probably.

Were there any lighter moments in all of this? Any gags or screw-ups, funny ad-libs or one-liners?

Sadly, no. This isn’t really a time to be flippant. There was just one really lame dad joke.

Ugh. OK. While discussing the government’s climate package, Robertson said “…we walk the walk, or we take public transport or another sustainable mode”.

That’s terrible. You shouldn’t have told me.

OK, that’s all the budget news I can take. What should I do now?

Make yourself some cheese rolls and eat them while listening to Toby and Bernard’s Gone By Lunchtime / When the Facts Change budget special. It will be way better than this.