Robert Reid is a veteran of New Zealand’s trade union movement. But, believe it or not, he was once a committed National Party member.

Those who know me (or even troll me) as a socialist and trade unionist may be surprised that I was once a member of the National Party, albeit leaving it at the tender age of 18 years.

I come from farming stock (no pun intended) with my grandfather and then my uncle running the family sheep farm in Waikaka Valley, just north of Gore. I had an interest in politics and at the even more tender age of 14 decided to join the Young Nationals, the youth branch of our family’s political party. My uncle George was a branch official of the Clutha Electorate and good friend with the then MP for Clutha, Peter Gordon. I lived with my widowed mother in Dunedin and visits to the farm were a regular occurrence every school holidays, bringing with them a lot of farming based political discussion.

Even at that age I was a bit of a comic and was a member and later leader of Kaikorai Valley High School’s debating team. Where my peers would paste pictures of their pop idols, I would cut out pictures of the entire national Cabinet at the time and plaster them on the inside of my school bag.

I collected subscriptions for the National Party in the leafy suburbs of Dunedin – such as the incongruously named Māori Hill. I would attend meetings when any of the National Party cabinet ministers came to town. I acted as an underage barman for an up-and-coming politician called Robert Muldoon at a National Party function Dunedin.

Yet just a year or so later, while still a National Party member, I found myself an anti-Vietnam War activist. On the Friday night of the annual National Party conference in Dunedin, an anti-war rally was being held in the city. I took part – I even addressed the crowd – and then took a letter from the rally into the party gathering.

While National Party delegates were filing into the Friday night session, a group of protesters from the rally rushed to the doors of the town hall and tried to prevent delegates from entering. The nation’s newspapers all reported on this “outrage”. On Saturday July 31, 1971, the New Zealand Herald ran the headline: “Conference Hall Besieged; MOB BACKS PM AGAINST WALL”. 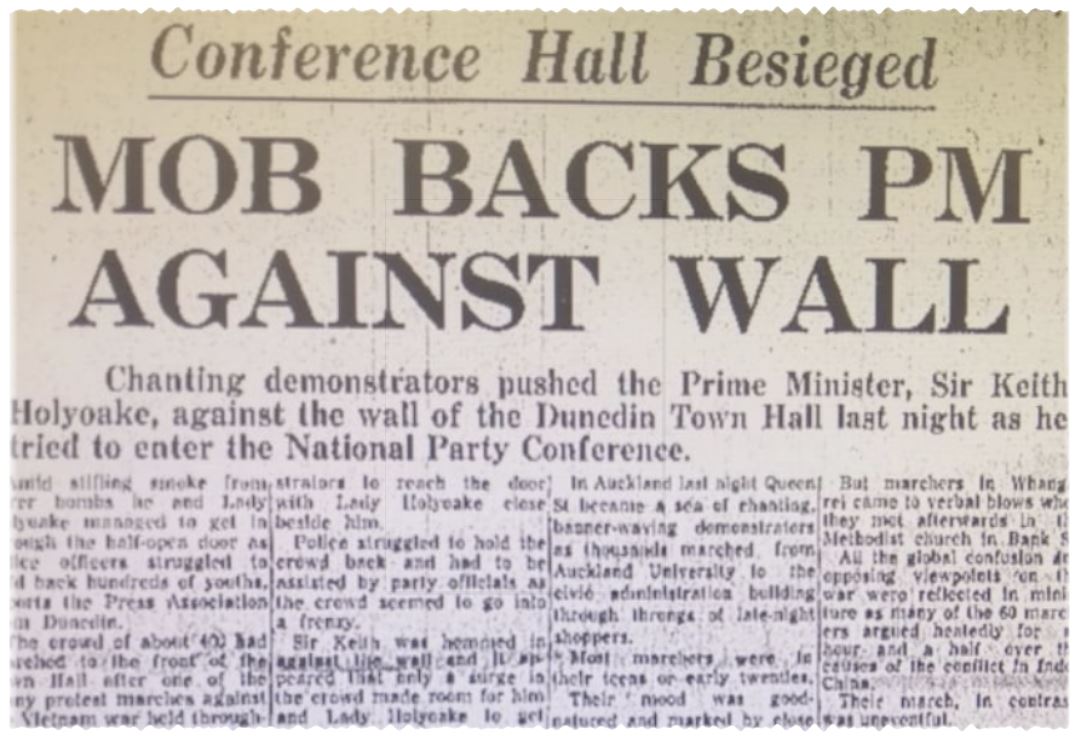 So it was into this lion’s den that I went with my letter from the rally outside. At the first lull in proceedings I got to my feet, went to the floor microphone, called a point of order (I also listened to parliament too much) and started reading from the letter. I was immediately drowned out by booing. The then vice-president of the National Party, the urbane George Chapman, intervened and said that there was no time to hear the letter read that evening but he would make time the following day. I resumed my seat and sat out the evening’s proceedings.

The following day the conference started as planned but after an hour no mention was made of when I could read the letter. Undeterred, I stood again at the next break in proceedings and asked when I could read it. George Chapman again got up and stated that the National Party executive had met overnight and determined that the letter would not be read and that was the end of the matter. I had, of course, been well out-manoeuvred and after a short protest and an increasing number of boos I made a strategic withdrawal to the back of the hall. The odd person, and certainly the media present commended me for my bravery as I withdrew. I left the conference before it finished. And that was the end of my National Party career.

Things moved fast for me from that stage in my trajectory from the right to the left. By the end of that year (1971) I had become international vice president of the NZ University Students Association (NZUSA) and a member of the Hart National Council. On my 19th birthday, November 11 1971, I refused to register for compulsory military training (CMT) as the law required and instead established the Organisation to Halt Military Service (OHMS). In the space of just over one year, we successfully saw the abolition of CMT by the incoming Kirk Labour government, having made the CMT system completely unworkable with false registration forms, false medical checks and with courts starting to be clogged with draft resisters like myself.

But in truth my shift from the right to the left had begun before the day I walked out of the National Party in 1971.

In many ways I was probably never “right”. Perhaps I was the epitome of the centrist that I now so despise. I was interested in politics, so I joined the political party of my family. I liked the words I heard from the National Party about it being the party of freedom. What young man does not want to be free? I allowed myself to be convinced that New Zealand had troops in Vietnam to protect the South Vietnamese people’s freedom from the terrible communists in the North. I swallowed the line that apartheid was the best system in South Africa as the blacks were not “ready” to govern themselves and politics and sport should not mix.

Yet underneath this I had a well of social justice bubbling up. My father, a Presbyterian minister until he died, when I was 12, served in the second world war but insisted on being a non-combatant and served in the Medical Corp. On my mother’s side I inherited some of the same genes as Archibald Baxter who as a pacifist was brutally punished for his beliefs in the first world war.

But it took two life and mind changing events to launch me from the centre right to the “far left” during these formative years.

In my last year of high school, still a Young Nat, I attended a United Nations Association Conference in Masterton. I can remember the late Jack Shallcrass and many others from the left-liberal establishment being there and giving us their views on education, apartheid, the Vietnam War and more. I heard views and opinions that I had never heard before. My mind had been opened.

Just before I left school in 1970 I was invited to a secondary schools camp in the Taieri organised by the Student Christian Movement. Although I was still a seventh former, I was asked to debate whether NZ should have troops in Vietnam with Bill Richards, a local trade union leader and communist. Bold as brass, I took the National Party line and even called on the help of the local office for arguments for the position I had to debate. Bill Richards could have destroyed this upstart 17-year-old, but he didn’t. He patiently answered all the points that I raised with a reasoned rebuttal. I felt my views changing as we debated. At the end he came and commended me for my efforts in a genuine, non-patronising way. “Robert,” he said holding out a piece of paper. “You may be interested in reading these books I have jotted down. I predict that after you do and think about them you will change your view on the Vietnam War. And you may even become a communist.” The rest, as they say, is history.