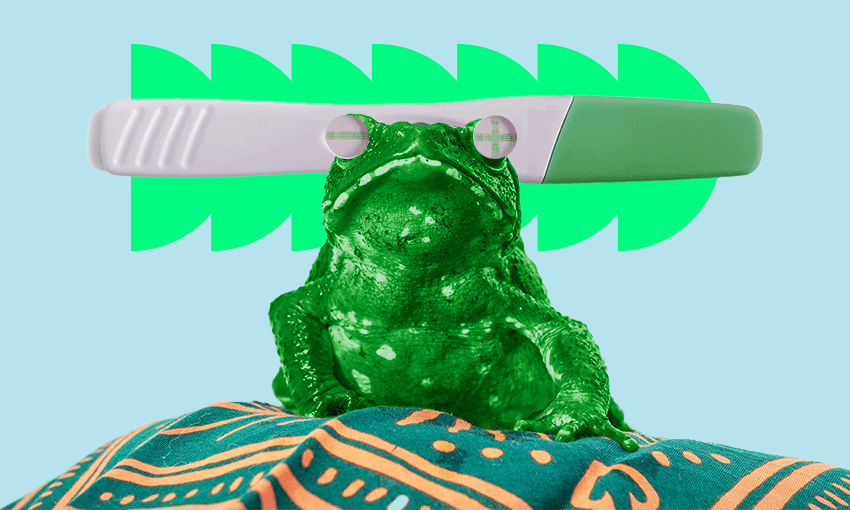 As recently as the 1970s, pregnancy testing involved sending pee away to be injected into a live frog. Alex Casey explores a strange, amphibian chapter in our medical history.

We take the luxuries of at-home health testing for granted these days. You can roll out of bed, pee on a stick with a Q-tip up your nose while drooling into a vial and know within mere minutes if you are with child, have Covid, or are on MDMA. But our testing methods haven’t always been quite so cute or convenient. In fact, one of the most popular methods used to diagnose pregnancy just over 50 years ago was by injecting a humble bit of wee into a humble local frog.

It may sound like Brothers Grimm fetish content, but the practice of using frogs to test human pregnancy has been well-documented around the world. In the late 1920s and early 1930s, a British scientist and statistician named Lancelot Hogben (again, promise this isn’t a fairytale) began experimenting with injecting various hormones into frogs and seeing what happened. The Hogben test, as it came to be known throughout the 1940s, 50s and 60s, involved injecting a sample of urine under the skin of a South African clawed frog. Other types of frogs worked too.

Within 12 hours, the frog would yield a result. If the urine contained H.C.G. (Human Chorionic Gonadotrophin), a hormone excreted in urine during pregnancy, the frog would begin to spawn. Mike Legge, former associate professor in biochemistry at the University of Otago, recalls the Hogben test being the most prolific form of pregnancy testing until at least the early 1970s in Aotearoa. The accuracy rate of the frogs was 12% positive the first week after the last missed period, 58% after the second week and 93% after the third week.

Where did all the frogs come from? “Internationally, there were frog dealers where African clawed frogs could be purchased,” Legge says, but local frogs were “a good substitute”. A 1996 journal article celebrating 50 years of medical laboratory science mentions that maintaining the frog supply in laboratories was a challenge. Around 100 frogs a month were sent to Auckland from Rotorua in “double deck, wooden boxes which were quite tricky to open without allowing a frog stampede to occur,” the article reads. “A telegram announced their arrival.”

When frog supplies ran short, local school children were encouraged to go on frog-catching expeditions, and could be paid as much as two shillings and six pence per frog.

Storing the frogs once they had been collected was an issue too. Unlike the mice and rabbits that came before them, frogs survived the testing process and could be reused. “Typically there was a fridge in a microbiology department to give the frogs exclusive residence as they would just go into hibernation until their services were required,” Legge explains. Tanks housing “fresh” or unused frogs had to be kept clean, which required frequent scrubbing and changes of water.

In one unnamed New Zealand laboratory, Legge recalls a staffer failing to shut the frog fridge door properly, and the lab workers being greeted by an army of wanderlusting frogs the next morning. “Needless to say, frogs were being discovered for quite a while.” Local frogs were reported to be fussy eaters too, with a penchant for live food. “Partial success was achieved with maggots on fly­blown meat and by attracting nocturnal flying insects with a light source,” the medical journal reads. When flies failed, force-feeding was another solution: “Half a teaspoon of mince spooned in and the throat stroked until swallowed.”

Dame Margaret Sparrow, lifelong advocate for women’s reproductive rights, was working at the other end of the process in student health and family planning in 1969 and 1970, and vividly recalls sending urine off to the lab for frog testing. She says patients would have had no idea their pee was going to be injected into a frog. “You just sent off your urine sample for a pregnancy test and didn’t really think about it,” she says. “The mice and rabbits were not really practical because of course you had to kill the animal to get the results. The frogs lived to do it all again.”

Although they were given two-week rest breaks between testing, it wasn’t smooth sailing for the frogs as the constant threat of infection loomed. “People were very worried because they thought ‘oh dear, what would happen if a pandemic went through all the frogs’, so they had to be carefully looked after,” Sparrow recalls. Those worries were founded – this RNZ article from 2019 suggests that Chytrid fungus, a disease that causes sporadic death in amphibians, “probably arrived in New Zealand on an introduced amphibian, possibly the clawed African frog that used to be used in pregnancy testing”.

Although frog tests were phased out in the mid-1970s and replaced with immunology tests using antigens or antibodies (which thankfully didn’t require live animals), Aotearoa was still slow to get on the at-home pregnancy test train. First invented in 1967 in the United States, they weren’t easily accessible for home here until around 1980, as evidenced in a furious excerpt in the ‘news and views’ section of a local medical magazine published on August 8, 1980.

“The NZMA express its concern that home testing packs are now available to the general public, and take action to have them banned from the market,” the letter begins, before listing all the ways that women might screw it up.

“The concern was that women wouldn’t understand the tests, wouldn’t carry it out right, wouldn’t know what a false negative was or a false positive,” Sparrow explains. “They thought women would need a lot of counselling and that it was much better for doctors to do it, and so it went on and on and on… but it was all prejudice.” Given the speed with which at-home rapid antigen tests were embraced in New Zealand just this year, Sparrow says it is a useful opportunity to reflect on how little faith society had in women less than 50 years ago.

“Did you hear anybody worrying about people understanding a negative test or not being able to read the instructions? There’s been none of that, because it was all discrimination against women and quite blatant misogyny back then.”

Family Planning chief executive Jackie Edmond says that the frog testing chapter, while thankfully now in the past, demonstrates that women have always wanted to know what’s happening with their bodies. “Just as women were fast to take up the contraceptive pill when it first became an option, women will also be fast to adopt a test that gives them the information they need. Frog testing may seem arcane now, but at the time we have no doubt it was cutting edge technology.” These days, she says a pregnancy test is a much more simple process that yields a highly accurate result.

“It does result in a fair amount of plastic waste though,” she adds. “So maybe the frogs really were a greener alternative?”