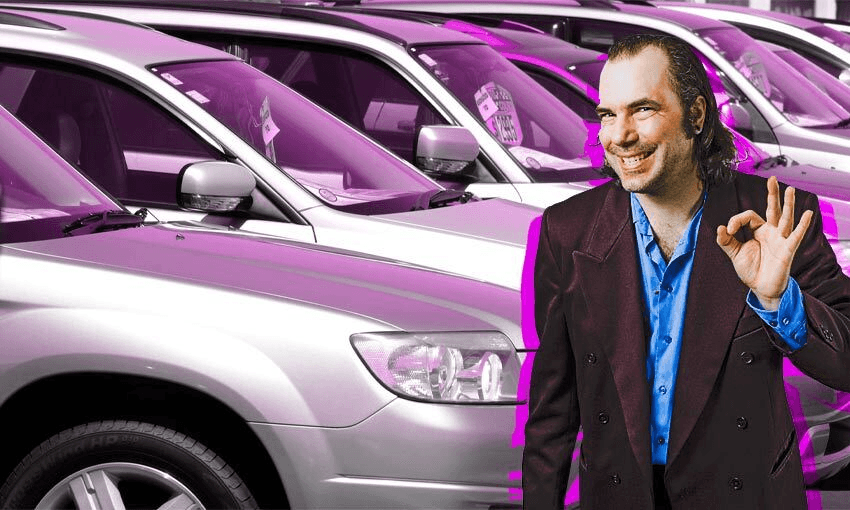 Two decades into the 21st century, too many car salesmen still think it’s OK to make sexist jokes that should have been left in the 1970s. But a handful of car saleswomen around Auckland are offering refuges from such outdated attitudes, reports Chris Schulz.

On a sunny Sunday at an inner-city Auckland car yard, an electric vehicle was offered for a test drive. Rebates are up for grabs – you might have heard – and we were looking to take advantage of them. So, my wife, my seven-year-old daughter and I found a family wagon with a sun roof, ample boot space and a six-star safety rating.

A salesman approached us, gave us his spiel, then went to get the keys. When he came back, we got something we didn’t want, expect, or ask for: a side dish of not-so-subtle sexism. “It’s got ‘Sport Mode’,” the salesman told us, “or as I like to call it, ‘Man Mode’.” He laughed, unlocked the doors, then whispered to me, “Don’t tell the missus,” as if she’d ruin our little secret.

Like casual racism or a Covid-19 conspiracy theory dropped into the conversation, it all happened so fast. It sneaked in, then sat there, polluting the air like a silent fart. I rolled my eyes at my wife but she hadn’t caught it. By the time I’d thought of an appropriate response, I was buckling my daughter into her seat, and it was too late.

We went for the test drive anyway. When the salesman asked if we were ready to make a deposit, we made our excuses and left. We want a car that keeps our family safe and doesn’t add to the climate crisis. “Man Mode” is not, and will never be, a necessity.

Spoiler alert: I told the missus. She wasn’t surprised – at all. “I know to expect it,” she told me. “I know it’s going to happen and I prepare myself for it.” I hadn’t noticed at the time, but when the salesman shook my hand, she’d stepped in to shake his hand too. Why? “Because I knew he wouldn’t ask. Because I wanted him to know my name.”

This sparked a conversation. Of privilege. Of things I could, and should, have said. Of what to do next time. My wife recounted other incidents. This wasn’t the first time we’d experienced sexism in a car yard. Not even close. There was the salesman who refused to acknowledge my wife’s existence, the salesman who assumed she didn’t drive and asked only for my driver’s licence, and the salesman who’d respond only to me, even if she was asking the questions. Welcome to an industry stuck permanently in man mode.

We’ve been driving the same clapped-out cars for close to 10 years. We haven’t visited a car yard during that time. Yet these experiences stand out. They’re old stories, but they stay in the memory banks. The fact it happened in 2021, when we’d just started looking at cars again, seemed surreal and unfair. “That’s slow progress,” my wife said, correctly, afterwards. In the wake of #metoo, other industries have woken up. Surely the car industry is due for a reckoning too?

Others feel the same way. A tweet about our incident picked up steam, indicating the experience wasn’t unique. One said she’d dropped her car off at a panel-beaters only to be told she’d have to wait. Only manual courtesy cars were available and they’d assumed she couldn’t drive one. She was forced to point out: “My car is a manual.”

A former salesman got in touch to say sexism has always been part of the industry. It’s partly why he left. “I saw several potential sales disappear from other salesmen because they ignored the female there,” he said. He agreed that if women asked questions, answers would often be directed towards the husband. He called them a “misogynistic bunch” and said “…the ‘cars are bloke stuff’ thinking prevailed.”

But what’s it like for a woman, on her own, trying to buy a car, navigating an industry that steadfastly refuses to get with the times? We were in one of Auckland’s most popular showrooms. Electric vehicles are flying out the door. According to this 2018 Nielson survey, 45% of car buyers in New Zealand are female. Yet there wasn’t a single saleswoman on the shop floor the day we visited. Is their only option to grin and bear it?

No, says Kylie Frost. “I hate hearing stories like this,” sighs the West Auckland saleswoman when I relay our story to her. She’s sympathetic, but she’s heard it all before – often from wary customers sent her way after another sad experience. She can’t understand sexist sales tactics either. “I usually ask the question, ‘Who’s the car for? Who’s going to be driving it?’ Because that’s who you need to talk to. You don’t make an assumption. I certainly wouldn’t talk about a ‘Man Mode’ … I would have thought that would be insane.”

Now, it’s a different story. “We’re not your regular typical everyday salesmen,” admits Frost. She and her husband don’t mind having a chin-wag. They include on-road costs in the sales price. Customers drop in for a cup of tea, and recommend Millars Car Centre to their friends. “By the time someone gets to us, they’ve usually had an experience like yours, and they’re completely against car yards, or salesmen, because they’ve had such a negative experience,” she says. “They usually say, ‘That was really easy, you made it so simple,’ and they’re really grateful.”

So why, in 2021, would sexism be part of sales tactics? Frost says it comes down to competition – and desperation. “Most car yards you’ve got salesmen … fighting to get your business to get their commission because that’s how they get their money,” she says. “We’re not on commission so it doesn’t matter who’s dealing with you. It’s just us.” Honesty’s important too. “I’m not going to force something else down your throat. If you’ve got $10,000 to spend, I’m not going to show you a $20,000 car.”

But the car industry is getting harder to make a living out of. New regulations for petrol vehicles are coming into play, making them more expensive. Frost believes other sales staff are getting desperate. “They’ll say whatever they can to get you to agree to sign on that dotted line,” she says. “At the moment people are desperate for money. It’s so hard, especially when it comes to cars.” The only way she and Tony make it work is by living on-site with their children – and the family cat. They work up to 70 hours a week, and haven’t had a holiday in two and a half years.

Frost has something surprising to admit. She’s experienced sexism herself – but from customers. “It goes the opposite way too,” she says. “I get guys in here … and they only want to talk to Tony because I’m a female. They think, ‘It’s not the woman you talk to, it’s the guy because the guy’s going to make the decision, and he’s the one who’s going to give them the best deal and he’s the boss.’ We’re married and we both own the yard, so technically I’m as much of a boss as he is.”

All of those issues, and yet, after our 20-minute interview, Frost’s got me laughing too. She doesn’t sound like a saleswoman – and that’s the point. That’s why people like buying cars off her. She’s not the only one either: Auto Angels has two outlets in Manukau and Ellerslie, is run by sisters Sarah and Hannah Kilburn, and features an all-female sales staff. When contacted, they said they’d heard plenty of stories like mine too, but declined the opportunity to take part in this story. “We have grandmas, mums, petrol heads and even some students on the team,” they told Woman’s Weekly in 2018.

Even though Frost doesn’t sell the kind of vehicle our family’s after, she still has time for some advice. “It’s the second most stressful thing you’ll buy – second only to a house. It’s a lot of money,” she says. In other words, do your research, shop around, and only buy from someone who comes recommended. “I’ve heard some horror stories,” she says. We’ve just had one of our own.