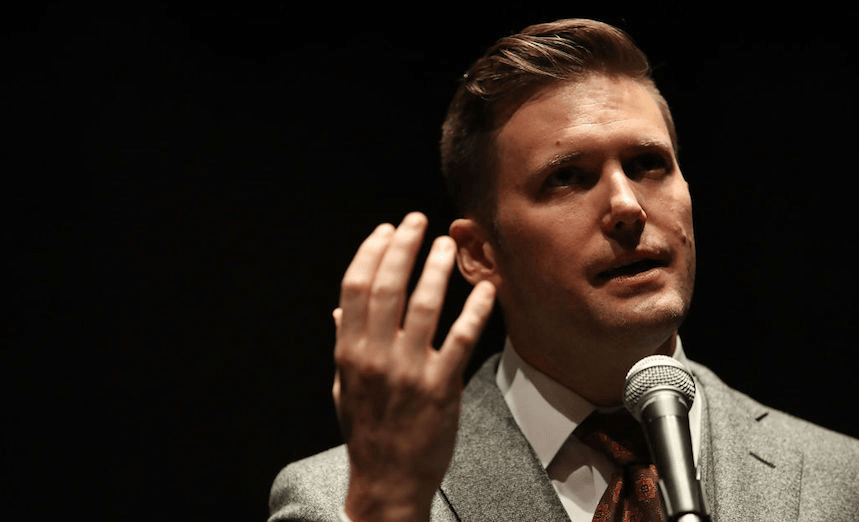 Richard Spencer talks on October 19, 2017 in Gainesville, Florida. Spencer delivered a speech on the college campus, his first since he and others participated in the “Unite the Right” rally, which turned violent in Charlottesville, Virginia. (Photo by Joe Raedle/Getty Images)

Richard Spencer talks on October 19, 2017 in Gainesville, Florida. Spencer delivered a speech on the college campus, his first since he and others participated in the “Unite the Right” rally, which turned violent in Charlottesville, Virginia. (Photo by Joe Raedle/Getty Images)

You know him as a white supremacist and dangerous idiot. New Zealander Julie Hill knew Richard Spencer as a fellow language student – one who was loathed by classmates and teachers alike.

For one day last decade, I became BFFs with white supremacist, coiner of the term “alt-right”, and one of the world’s biggest fuckwits, Richard Spencer.

We were in Berlin, in the magical, endless summer of 2006, when Germany hosted the World Cup and rediscovered its patriotic mojo. The city, branded by its cool gay mayor Klaus Wowereit as “poor but sexy”, was becoming a Mecca for artists.

I’d won a scholarship to study German in Berlin, and after sitting a test had rather fraudulently ended up in the advanced class. My German, which I’d learned as a teenage exchange student, was now rusty as hell, but I was too vain and competitive to demote myself to an easier class.

In über-hipster Berlin, Richard Spencer stood out like a poo in a punchbowl. He was the embodiment of preppy: his hair rigidly gelled to one side, his clothing perma-pressed and immaculate. But he was, initially at least, friendly and charming, and handsome in a big-faced Buzz Lightyear kind of way. And it pains me to say it, but his German was excellent, although his accent was diabolical.

I was drawn to Spencer, not so much because of his winning personality, but because he was the only other native English speaker in our class. On our first day, during the kleine Pause, the little break, I admitted to him that I was out of my league. He encouraged me to stay in the class and offered to help me out with my tenses. What a kind guy, I thought.

That night, we met at a Vietnamese restaurant, where Spencer patiently wrote out and explained the correct usage of all the tenses. We chatted about our backgrounds. He told me he and some of his other family members owned a bunch of “farms” somewhere in the South. Said “farms” turned out to be a vast swath of cotton plantations in Louisiana, the kind African slaves were forced to work on for free. But we’ll get to that.

By the end of our meal Spencer still had a tiny bit of food on his plate, and he asked the waiter if he could have it to take away. The waiter frowned and said “really?” because it was such a small amount, but Spencer wasn’t embarrassed. I later learned that he couldn’t cook so much as a piece of toast, seemingly because he was too posh, so taking away tiny morsels of food from restaurants was the only way he could stay alive.

Spencer and I were both scholarship students and had been billeted out to family homes. I was staying in Kreuzberg with a performance artist who played violin while wearing a suit of grass but, despite her last name literally meaning “cool” (Kühl), she was incredibly uptight, so I’d arranged to move houses. Spencer, meanwhile, was living in some old guy’s house in Nollendorfplatz. The old guy was never home and there was a spare room, so when Spencer offered it to me for the night, I snapped it up.

The apartment was owned by a businessman in his seventies. It what I imagine a Masonic lodge might look like, with dark wooden panelling and a moose’s head hanging in the hallway. Spencer showed me photos of the man in his youth, chatting up an array of foxy ladies. It was clear that Spencer aspired to become this old German guy some day.

We sat at a table in the kitchen, where Spencer told me about a game he liked to play called “Lesbian or just German?”, the idea being that German women were so hairy and asexual that one couldn’t tell the difference. I was beginning to think this guy might be a bit of an arsehole. Later, he confirmed my suspicions by going on an unprompted rant about why Mexicans shouldn’t be let into the United States. We fought about this for some time, but trying to argue with Spencer was a lot like repeatedly smashing one’s head into a brick wall, so eventually I gave up and went to bed.

In the middle of the night, the door opened. Spencer was standing there wearing only his grey fitted boxer shorts. Evidently, he’d thoroughly misinterpreted my burning desire to improve my grammar. He said “hi”. I said “fuck off”. Thankfully, he did. But from then on, Richard Spencer, or “Richie Rich”, or “Richard the Republican”, as I called him behind his back, became my nemesis.

There is a German word that applies well to Spencer: Backpfeifengesicht. It means “a face that is crying out for a slap”. In class, he would go off on lengthy, tedious monologues that had even our teacher rolling his eyes. On one occasion, he and I ended up in a stand-up shouting match, during which I had to switch to English because there aren’t enough good swear words in German. Our class was composed of people of all ages, from all walks of life, and from all parts of the planet, but if there was one thing that united us, it was that we hated Richard Spencer’s guts.

At the time, Spencer was a PhD student at Duke University in North Carolina. During one of his unprompted tirades, he told us about a case going on there in which a stripper had accused three lacrosse players of rape. She was black, they were white, and it was being viewed as a hate crime. I remember the room falling silent when Spencer suggested that the lacrosse players (who were later found innocent) couldn’t have done it, because why would they want to have sex with a black woman?

There was something tragic about Spencer. He knew people despised him, but seemed kind of used to it. I remember him telling me wistfully that this was his third summer learning German abroad, but he still hadn’t met a nice girl. On my birthday, I took pity on him and invited him along to my party at a grungy bar called Wohnzimmer. He turned up with a tall, blonde Latvian woman, and they sat there looking like Barbie and Ken in Bohemia.

The year after our course, Spencer quit Duke to, in his own words, “pursue a life of thought crime”. He became assistant editor at The American Conservative magazine, but was fired because his views were too extreme. In 2010, he founded AlternativeRight.com, advocating for a “white ethno-state on the North American continent” and giving up “the false dreams of equality and democracy”.

Last year, Spencer shouted “hail Trump, hail our people, hail victory!” at a white nationalist conference in Washington DC. The crowd responded with Nazi salutes. In January, at Donald Trump’s inauguration, a masked man randomly punched him in the Backpfeifengesicht. And in May, Spencer led the tiki torch protest in Charlottesville, Virginia against the removal of a statue of Confederate leader Robert E. Lee.

Last week, a video went viral in which Spencer tells Guardian journalist Gary Younge that Africans contributed nothing to civilization but did super well out of slavery. Ever the charmer, he adds that since Younge is black, he can’t be British. Younge ends the interview in disgust.

On our last day of term, my German class staged a mutiny. Our teacher had encouraged us to make speeches to each other improve our spoken German, an offer no one had so far taken up. Spencer was a huge fan of the German philosopher Friedrich Nietzsche, whose writing he had interpreted to mean that there was simply no point bothering with morality. (“A little bit of Nietzsche in the wrong hands can be fatal,” quipped my Parisian classmate Pascal.)

The thought of spending the last hour of class, on a day that was hot as holy hell, listening to Spencer rant about Nietschze was simply unbearable, so after the kleine Pause, everyone but Richard walked out of school and went over the road for a beer. Later, our teacher admitted he saw us crossing the road from his office window, and silently cheered.