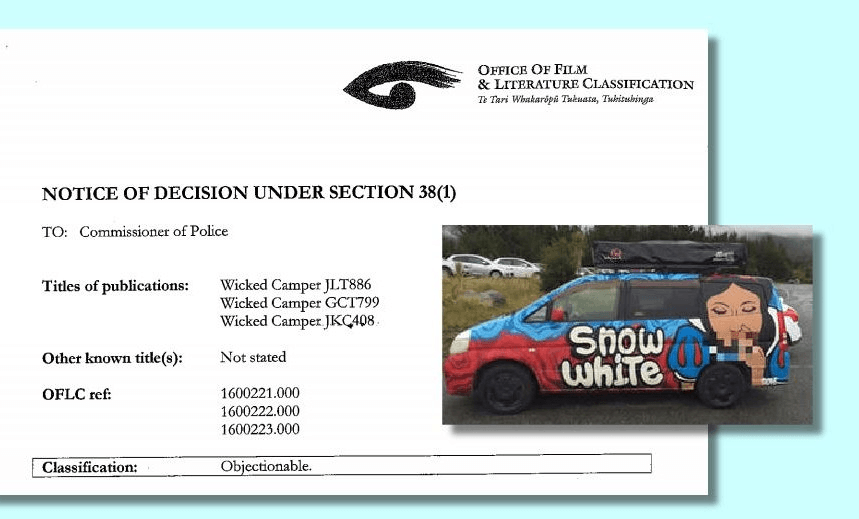 Why the censor’s ban on Wicked Campers is ridiculous

By Graeme Edgeler
Guest writer
Made possible by

Opinion: By issuing a blanket ban because an age restriction would be “impracticable”, the Office of Film and Literature Classification has dangerously overdone it, putting drivers of the vans on a par with child sex offenders, writes Graeme Edgeler.

Last week, the Office of Film and Literature Classification declared three Wicked Campers vans “objectionable” because they depicted drug use in a way that was injurious to the public.

Objectionable is the official term for a publication that has been banned by the censor. Publications can also be “restricted” (usually an age restriction, such as R16 or R18), but something that is objectionable has been determined by the censor to be so bad that merely limiting its availability to a particular group would not protect the public from injury.

New Zealand’s censors have sometimes limited possession of particular publications to particular groups. The video All Hand on Dick, for example, is R18, but can be shown to people under 18 when screened by the AIDS Foundation as part of an education programme. The book A Do-It-Yourself Submachine Gun is limited to people with the firearms licence endorsement permitting them to possess restricted weapons. Page 73 of a printout of one particular Facebook conversation is limited to the person depicted in a photograph appearing with it.

It wasn’t always this way. When our current censorship law was introduced, the offence of possession of an objectionable publication was a fine-only offence (that’s now up to 10 years). More serious offences, such as creation, and possession with intent to supply objectionable publications, were punishable by up to a year in prison (that’s now 14 years).

The law doesn’t distinguish between different types of objectionable publication. The same maximum penalties apply whether a publication is banned because it’s about how to grow marijuana, or because it’s a particularly vile image of child sexual exploitation.

With punishments this serious, the act of declaring a publication to be objectionable is a big deal, and because a classification acts retrospectively, those who were involved in creating the now banned Wicked Camper’s vans potentially face charges with the same maximum penalties. And the same offences also apply to those who merely possessed these vans, including tourists who hired them.

Our law recognises that publications can cause harm, and Parliament has empowered the censor to ban publications that would cause harm to society, if even a single person had possession of them.

And when the censor forms the view that society would be harmed if particular sectors of society had access to them, they are empowered to restrict access to them. Consideration of restrictions is important when assessing freedom of expression, but it is much less serious: the maximum penalty for showing someone a restricted publication that they are restricted from seeing is three months’ imprisonment.

So, is the cartoon of Snow White snorting some white powder that appeared on one of Wicked Campers’ vans really so detrimental to society that no one at all should be permitted to see it?

A matter for debate, surely? Oddly, not really. Even the censor didn’t think society would be harmed if adults see the pictures. In fact, the censor’s decision makes it clear that it would be fine if 16-year-olds saw these images.

The censor didn’t ban these vans because no one should be able to see them, the censor banned them because it was decided that it would be too hard to stop kids under 16 from seeing them if there was a restriction.

Factually, I think the censor is wrong. An R16 rating would empower enforcement agencies like the Police to act to stop children seeing these vans.

But legally, the situation is even worse. In order to deter a harm that Parliament says is only bad enough to be punished by a maximum of three months’ imprisonment (that’s the harm of someone under a certain age seeing something the censor says they should be restricted from seeing), the censor has taken a decision that means that breaches can be punished by up to 10 or 14 years’ imprisonment, and this bans people that the censor has no problem from seeing these images from seeing them.

This is obviously ridiculous. It’s directly contrary to the principled decision of the censor in un-restricting Ted Dawes’ young adult novel Into the River (the R14 rating imposed by the Film and Literature Board of Review was making it difficult for people over 14 to read the book, as it meant couldn’t be placed on open library shelves, or on display in book stores).

But despite determining that society would not be harmed if 16 years old could see these vans, the censor has banned them anyway. Why? Pretty much because it’s all just too hard:

Because of the problematic nature of the images and text on the campervans and the likelihood of harmful and potentially ongoing effects on young viewers, a classification of R16, which would prevent access by children and young teenagers, has been considered. However, such a restriction would have consequences beyond the intended effect: the medium makes it impossible to protect children and younger teenagers without preventing the camper vans from being publicly available to anyone. The application of any of the available conditions in respect of public display is manifestly impracticable.

The censor appears to recognise that making a van R16 would have the effect of a public ban – you couldn’t drive it on a road because it might be seen by someone under 16 – and says this would be a consequence “beyond the intended effect” of a restriction. But the censor’s resolution to this problem is to go even further, and ban them completely.

This makes no sense. The vans contain artwork that the censor thinks is perfectly lawful, artwork that children shouldn’t see, but which adults should be able to see, and which adults should be able to paint. But to ensure children don’t see it, the censor has made a decision that means that the person who painted something that the censor thinks is entirely appropriate for an adult to paint, has committed an offence punishable by 14 years’ imprisonment, and which, may under the Government’s proposed sex offenders register require the person who painted them (and anyone who drove them) to register as a child sex offender for life. How is that not a consequence significantly beyond the intended effect?

An R16 rating for these vans would prevent them being driven in public: any police officer who saw one of these vans in public, and in view of children, could seize it as evidence of an imprisonable offence. The only difference is, it would be an offence at the level Parliament actually intended for publications the censor thinks adults should be able to see but children shouldn’t.

The Office of Film and Literature Classification is an expert body, their role being to determine ratings for publications whose availability may harm society, while taking account of freedom of expression. The OFLC is not an enforcement agency. That they consider there may be practical difficulties in pursuing some prosecutions for certain types of publication should be irrelevant. They ought to be looking a publication, even a van, and declaring: society may be harmed if this van can be seen by people under 16, but will not be harmed if it is seen by people 17 and older, therefore we rate it R16. Matters of proof and evidence in a prosecution are matters for the Police, Department of Internal Affairs, or the Courts.

Our censorship laws weren’t really written with the purpose of dealing with images of child sexual exploitation, but as that became a bigger problem, the offences in our censorship law have been used for that purpose, and the penalties it provides increase markedly over time, even though the penalties apply to all objectionable publications. That sometimes becomes ridiculous: the maximum penalty for running a large-scale marijuana operation is eight years, while the maximum penalty for possessing a book about growing marijuana is 10 years.