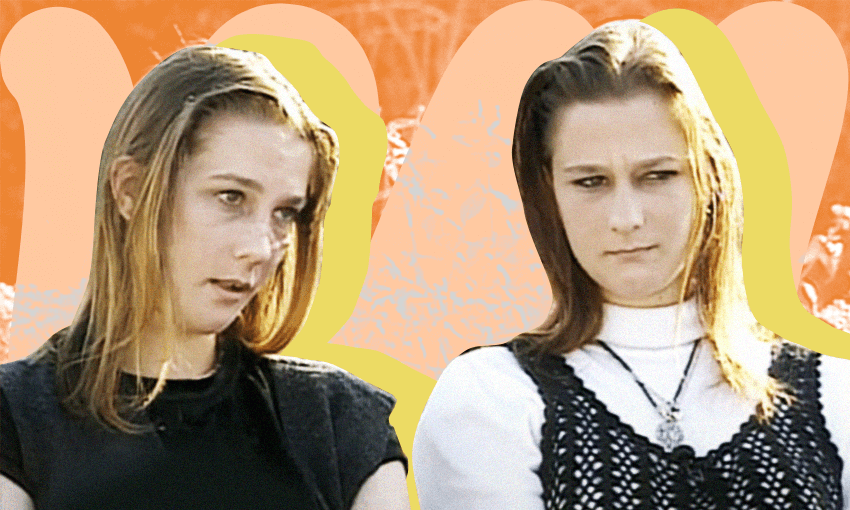 Linda Burgess on the enduring legend of Joanne and Sarah Ingham, the twins whose story captivated the nation in the 1990s.

New Zealand has a place, in what’s ironically known as its heart, for legends. You’ve got most chance of having the word applied to you if you’ve been a top sportsman. If you’re a woman aspiring to greatness, your best bet is national treasure. Too young at 18 to be national treasures, the Ingham twins became, extraordinarily, legends.

My God! I said yesterday to anyone who’d listen. One of the Ingham twins has died!

I thought of what I knew about them, and wondered why, quarter of a century later, it was still so much. They were twins of course, which in all stories adds an extra dimension. And young – just past school age, two teenage girls egging each other on. There was something to do with a foreign sailor – so, a love interest. And stowing away on a ship – again, an adventure story. And as in all good stories, there was a crisis – didn’t they leap off and swim for days through shark-infested waters?

There was a pause. Then here they came again. A happy ending of sorts, marriage to the Malaysian sailor and his friend. Then an unexpected denouement – didn’t they convert to Islam or something? Who was writing this script? Was it them? Why didn’t someone pick them up to write Shortland Street?

And thanks to the internet, and NZ On Screen’s terrific database, there it still is: the famous interview with Paul Holmes. Anyone rewatching this interview remembers that in 1997 pretty much everyone watched the same three channels – there was no Netflix, no YouTube, no million other options that you can’t be bothered watching. So everyone saw it. There was Holmes – a legend! – with his impish grin, at that stage known as New Zealand’s more ruthless interviewer. He’s quiet, he probes gently, he’s kind, he’s not for a minute trying to dump them in it.

He’s in a pretty suburban garden, roses and well-tended lawn. He’s talking to the twins Joanne and Sarah, and between them sits their English-born mother, dressed like Penelope Keith, propped up by her herbaceous border. He’s doing his best to get the story out of Joanne and Sarah, who are mistresses of the I dunnos and Might ofs and She can answer that one and No he asked you. There’s Joanne dumping Sarah in it. You screamed. You did. Most interestingly there’s a joint profound understanding of each other. She screamed. Then she had that look on her face. The one that she gets.

It was when Sarah got that look on her face that Joanne’s previously implacable, strategic boyfriend decided that they weren’t getting to shore fast enough, so he untied Sarah from their shared buoy. Holmes is modestly aghast. He asks Joanne what she thought about that, her boyfriend untying her sister, and she gave one of those shrugs that said far better than 1,000 words that Sarah was asking for it. Holmes looks at Sarah. Was she by herself in the sea? Yep. Scared? Shrug. But they came back. Yup.

They weren’t scared of crocodiles because they didn’t know about them. They said they wouldn’t tell, and they did. Sarah wanted to stand on the beach and wave at planes. Wimp, Joanne implied.

Memory is a difficult thing to dissect. I’m left wondering, was it this interview that makes me remember this story to this day? But I don’t think so. It wasn’t Holmes who crafted their story, and the story didn’t stop. Bizarrely, it seems that they actually weren’t in it for the limelight: they were just being themselves. We couldn’t get enough of them. Periodically they’d turn up again on the news. A joint wedding to their Malaysian sailor boyfriends. Joanne and her sailor had sworn to be true to each other, he’d written the letter, she’d copied it out and they’d signed it with their blood. Did he cut you? asks Holmes. Nope. I cut m’self. And who cut him? Me.

And in due course the blood oath was fulfilled. A conversion to Islam. Home from Malaysia in 2004 on a holiday they didn’t return from. Joanne in trouble from time to time. Minor infringements. Public fights. Drink, always the drink. Then on a winter’s day in Wellington, Sarah crying outside the crummy motel where her twin has been found dead.

Everyone over 40 remembers them. Legends.