Police attack dogs cause worryingly high rates of injury, newly released data shows. Mark Hanna says it’s time to ask if the way police are using them, and on whom, is worth the risk.

As most of us see them portrayed only in a positive light, it’s perhaps not surprising that many of us feel a fierce loyalty towards New Zealand’s police dogs.

But we can’t ignore that one of the ways police dogs are used in New Zealand is to attack people.

After over two years of requests and a nine-month-long complaint to the Ombudsman, NZ Police has finally released its TOR (tactical options reporting) data detailing how police used force in 2018.

I’ve analysed this data to look into how police dogs are used as attack dogs, and to find the extent of the harm done by this approach. You can read my full findings here.

Looking at how often police used each tactical option in 2018, the use of attack dogs was relatively rare: Despite this, attack dogs caused more than half the moderate and serious injuries inflicted by police that year. 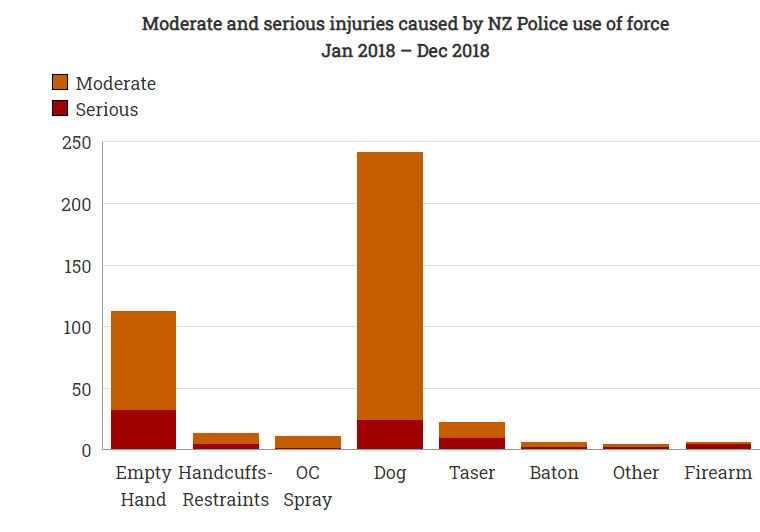 In 2018, the injury rate for police attack dogs was 86%. When a police dog handler directs their dog to attack someone, they know with near certainty that it will injure that person.

The people police set attack dogs on are overwhelmingly unarmed and just trying to get away. But that’s not all – they are also mostly Māori.

Despite making up only 17% of the population of Aotearoa, 57% of the time police used attack dogs in 2018 they used them against Māori. Most of the moderate and serious injuries inflicted by police attack dogs were inflicted on Māori too.

After each TOR event – one police officer using force against one person – where attack dogs were used, NZ Police was much more likely to charge people with dishonesty offences than when attack dogs weren’t used. Most of those dishonesty charges (86%) were for burglary or car theft.

NZ Police’s taser policy prohibits police officers from ever discharging a taser on a person below the “assaultive” threshold, which is above the “active resistant” category in their risk assessment framework, because that use would not be proportionate.

No such rule is in place for attack dogs, despite their far higher injury rate.

I asked NZ Police if it believes its use of dogs to bite people is worth the harm caused through the injuries they inflict, and if they would consider changing their policy around the use of force and police dogs.

In a statement, Inspector Nic Brown, NZ Police’s acting director of capability, said police were “acutely aware of the impact our dogs can have when biting someone”, adding that dogs and handlers received robust training and were regularly validated.

Brown said that in 2018, dog teams attended around 88,000 jobs, out of which only 297 TOR events involving a police dog bite or injury occurred (there can be multiple TOR events relating to the same incident). Of those injured, he said the “vast majority” did not require hospital treatment, and less than 10% met the requirement for notification to the Independent Police Conduct Authority (IPCA), he said. All dog bites are reviewed by the dog handler’s supervisor, with only more serious bites referred to the IPCA.

“Nearly all dog deployments occur when people have committed offences and run away, or are in possession of weapons and confronting police, and in most cases the use of OC spray or taser is impractical,” said Brown.

On the majority of people having dogs set on them being “active resistant”, Brown said “an actively resisting offender who has run off could have just committed a serious offence such as homicide, aggravated robbery, rape or burglary and police are duty bound to apprehend this person to prevent further harm”.

He said the “contextual detail” around the events was important, and not well reflected in the data released. If a dog had not been used in these situations, the offender may have continued to pose a risk to the community, he said, adding that dog handlers must issue “a loud clear challenge to an offender advising the dog will be released if they do not comply”.

In December 2020, NZ Police reworded their pursuits policy so officers would be less likely to initiate pursuits when the risk of harm means they wouldn’t be justified. In an internal email leaked to Stuff, Wellington road policing manager Inspector Wade Jennings told police officers, “A very basic question to ask yourself is ‘is what I am chasing worth the risk?’.”

Ideally, I think NZ Police should discontinue their use of attack dogs. I believe their use simply does more harm than it is worth. But until that happens, I would like NZ Police to tell their dog handlers to ask themselves the same very basic question:

Is what you are chasing worth the risk?

If the answer is no, then they should not tell their dogs to attack anyone.

If police dog handlers won’t ask themselves that question, then we should ask them. This is a conversation that we need to have.