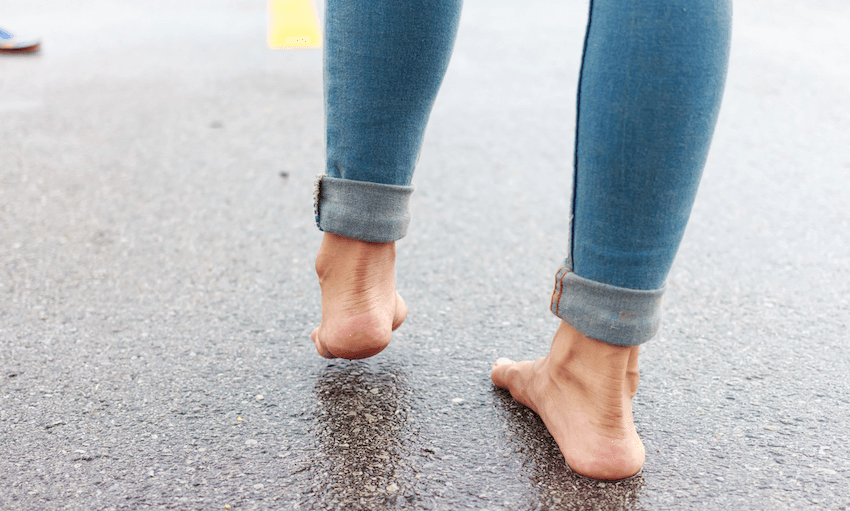 ‘Aren’t your feet cold?!’ What it’s like to go barefoot everywhere

If you see a woman walking barefoot around Parliament, it’s probably Wellington policy advisor Amy Russell. She explains why she rarely wears shoes, and why the raised eyebrows don’t bother her, much.

By and large, I don’t wear shoes. I mostly walk barefoot to and from work. I go barefoot in the office. I go barefoot in other people’s offices, anytime I’m meeting with someone I know won’t care – with the honourable exception of meetings with honourable Members, when I wear Vibram FiveFingers. I go barefoot when popping out for lunch, or doing the grocery shopping, or going out to dinner – unless I’m dining with people I think will be embarrassed by it or the restaurant is a bit fancy. When I can, I run barefoot. (Though since the time I burned my soles, I no longer run barefoot on the pavement on sunny summer afternoons.)

Most days in winter and, Wellington being Wellington, quite often in the other seasons too, I get asked, “Aren’t your feet cold?”. In lifts, or in the lobby of my building; sometimes on the street. Sometimes by colleagues but mostly by strangers.

Usually the questioner is just curious. I don’t mind satisfying politely expressed curiosity, so I try to tell the truth. Usually, the answer’s no, they’re not cold. If I’m out and about, they’re warm because I’m on the move. The ground beneath my feet, whether it’s pavement or carpet or tiles or grass, hardly ever feels unpleasantly cold, so long as it’s dry. And if the sun has lingered on a patch of pavement for half an hour or so, it’s like walking on underfloor heating, even if the air is cold. That’s a delightful sensation. So is walking across the dewy lawns of Parliament on a fine morning.

At other times I say yes, they are a bit cold. If the weather’s wet as well as chilly, they often start to feel a bit cooler than is comfortable, especially if I have to be still for any length of time. Waiting for the bus on a rainy winter morning isn’t always joyous, even on those rare and special occasions when the bus shows up. On the other hand, splashing in the puddles along Lambton Quay feels really good; and everything warms up quickly once I’m indoors.

Sometimes the question has a different flavour. Asked with a certain tone of voice and sometimes the raise of a skeptical eyebrow, the question “Aren’t your feet cold?” can really mean, “Attempt to justify your noncomformity”. These people are thinking to themselves: “Obviously her feet must be cold. But she doesn’t look hapless or impoverished enough to be involuntarily shoeless. Therefore, she must be trying to make some kind of point. I shall demand an explanation in the guise of a concerned question.”

I’m not trying to make a point, and don’t feel the need to furnish an explanation to people who ask for it with this attitude. But I get that people are curious. When we see someone doing something that isn’t normal, it’s human nature to want to know why.

So I don’t mind telling you why I go barefoot. It’s because I really like it! I like to feel the textures and temperatures change as I walk from place to place. I like to be able to wiggle my toes, and to flex and bend my arches. I like the feeling of freedom it gives me. But I’ve got nothing to prove. I’m just trying to enjoy myself quietly. I’d go barefoot inconspicuously if I could think of a way to, but I can’t. Painting shoes onto my feet, maybe?

Because I am white and well-spoken – characteristics that deliver privilege in our society – I am usually treated respectfully, despite my disconcerting noncomformist behaviour. Still, I can tell that some people think it’s icky that I go outside without shoes on. That’s okay. I sometimes find some other people’s personal adornment choices pretty icky too. I expect we all see people on a daily basis who we think have made some tactical errors at the dressing-up box. But live and let live, right?

The happiest and most interesting world is one in which everyone feels free to pursue their harmless quirks, and we all get to enjoy the diversity.

Sometimes the reaction I get is not distaste but envy. Every now and again, usually when I’m alone in the lift with an unknown fellow professional, I get a wistful “I wish I could do that”, with a nod at my happy wiggly toes.