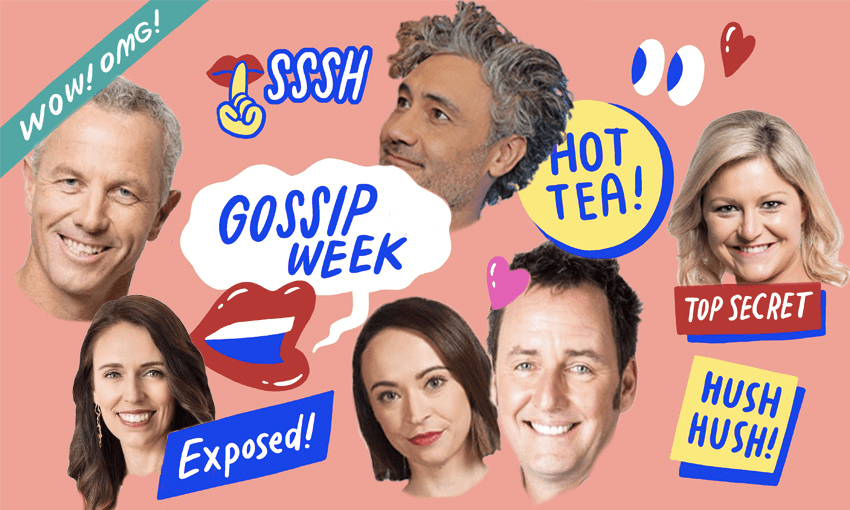 Jamboree is back! The triumphant return of The Spinoff’s gossip column

By Our Cub Reporter
Guest writer

At the smouldering dusk of 2015, The Spinoff peaked. In answer to the gossip behemoth that was Scout, we laid down the gauntlet: Jamboree. Not a big gauntlet. More like a mitten. We burned bright, and we burned short. Three editions of Jamboree were fired into the online sky, like dust encased fireworks you found in your parents’ garage.

We revealed that All Blacks went to a strip club where there was no stripping. We watched Jacinda Ardern launch a Steve Braunias book. We praised Kate Hawkesby. We spotted Sonny Bill Williams at the zoo. We ate mozzarella balls at the music awards. And then it was over. Gone. It felt like it lasted just a few weeks, because it lasted a few weeks. The only gossip column in the history of New Zealand that was less successful than Scout. Nobody wrote the anatomy of us.

But you know what they say: cometh the Gossip Week, cometh the Cub Reporter. In this very special return of Jamboree, we cover all the gossip that happened in New Zealand between the last published edition, November 20 2015, and yesterday.

An official apology to Toni Street on behalf of all New Zealand media. At the revamped Voyager Media Awards last month it was less cub reporters and more Tasmanian devils. Poor Toni must have felt like she’d been thrown into a zoo enclosure, and was forced to shush the unruly Auckland Town Hall crowd at least 500 times. A new, quickfire format meant clattering through the categories, with only a handful of speeches. The chatter in the leadup to the event surrounded the decision to do away with a sit-down meal, with bar-style seating and “substantial canapes”. That, and the capacity shrinkage that meant plenty missed out on tickets. The night’s disappointments were the failure of any speech-giver to acknowledge the canapes and their substance. Nor was there any acknowledgement of Street’s co-host, a disembodied voice with a 70s timbre, piped on to the stage. Jamboree’s eyes were focused like lasers on Voyager supremo Seeby Woodhouse through the night, hoping he might beam back into his golden orb but he failed us again.

To the Doc Edge Festival in Auckland, where aliens wandered on stilts and Chelsea Winstanley was spied wearing “a very good beret”, according to a reliable source. “I think it was velvet, I cannot find it online.” News of Winstanley’s beret will alarm Tova O’Brien, who has had no real challengers to her felt French crown for some time. The Newshub supernova was back sporting a beret in Queenstown last month with the remarkables, aka Scomo and Jacinda. But as seasoned beret-watchers detected immediately, it was not the same beret that won the heart of a nation in the National Party disaster movie of 2020. That beret, O’Brien’s first, purchased on a trip to Tokyo with Tova’s mum, vanished at some point last month on arrival in the vicinity of Dunedin Airport. Jamboree understands that Dunedin Airport hero Bruce searched for the beret for days, to no avail. If you find the beret, we’ll give you FIFTY DOLLARS for it.

In the days following the Queenstown summit, your cub reporter bumped into Jacinda Ardern, sans beret, at a Morningside cafe. She was “doing the socials”, she said, looking up from an Instagram screen, awaiting a tray of takeaway coffees which she claimed were for “the team”. Asked for the skinny on ████████████ and his ██████████, she said, simply, “████████████████████, ████, ████████? ████████ ██.”

Everyone has bought stuff for a dollar, but Sinead Boucher is the only person to have bought Stuff for a dollar. To celebrate a year since the purchase, the media group threw a party at the Glasshouse – another Morningside haunt. Stuff evidently could find no one among their hundreds of employees to host the thing, so enlisted Te Radar, who came complete with a dapper new mullet. In an exercise presumably designed to illustrate the seamless communications between the media giant’s Auckland and Wellington offices, Mr Radar hollered questions at interlocutors at the very opposite end of the room. Masked and hatted, The Sweet Mix Kids were there, too. They managed to make it to the end of their set, an improvement from their effort at the Unfiltered Party at the toy mansion a few years back, when Sweet Mix Kid stormed off the stage leaving Sweet Mix Kid to finish the work alone.

Among the seismic activity recently reported in Wellington is a supposed clash between finance minister Grant Robertson and Reserve Bank governor Adrian Orr. Last year the pair wrapped their necks in ruffs, raised their quills, and engaged in epistolary battle over the Monetary Policy Remit. But there is unity in books, and so it was at Unity Books last week as the monetary titans gathered in a packed room for the launch of Loop Tracks, which, according to words your cub reporter is copying and pasting from the VUP site, is a major New Zealand novel, written in real time against the progress of the Covid-19 pandemic and the New Zealand General Election and euthanasia referendum. We hear it’s extremely good. So good that the Reserve Bank governor went home with its author.

It is the law now in New Zealand that every live event must be opened with an acknowledgement that we are Truly Blessed to be able to have live events at all, and so it was at the Auckland Writers Festival, where punters breathed heavily across one another all night. After the exclusive first night party on the stage at the Aotea Centre, where Pip Muir announced her departure as trust chair, a bevy of publishing luminaries, writers and media types celebrated the absence of Covid by slumping themselves on the steps, pouring out a bottle of Central Otago red into a plastic pint glass and passing it round like Coromandel Gold.

Fresh from the accolades for Toi Tū Toi Ora at Auckland Art Gallery, Nigel Borell launched Moana Waiwai, Moana Pāti, a new group exhibition under his curation at Tautai Contemporary Pacific Arts Trust, the other day. The canapes were substantial. So was the music. The only bum note in a night of celebration came when a pakeha representative of one of the sponsors cheerfully told a room packed with brown artists that one of the benefits of contemporary art is that it stops people from doing graffiti.

From the Jamboree food desk: Mike Hosking eats olives and whistles at 4.30am as he prepares for another award-winning day at Newstalk ZB. Lorde and Jacinda Ardern dined together at Cazador on Dominion Road. Jemaine Clement went to Sweet Mother’s Kitchen on Courtney Place at least once. A man at an airport told Jamboree that the food at Gloriavale is “edible but bland”. Mark Richardson was spotted drinking coffee on New North Road. Winston Peters was spotted enjoying a lovely meal at Grand Harbour. Duncan Garner was spotted chugging a Powerade outside New World Mount Roskill.

Teeks and a dog news

Teeks was spotted at a dog park on Meola Reef.

Forget a second crossing to the North Shore. The inner suburbs of Auckland urgently require a bridge to the Hollywood hills. You can barely move in Herne Bay for the glittery trails of cast and crew working on a multi-million production for one streaming service or the other. Cowboy Bebop has wrapped filming in Auckland and awaiting news on when a second season might burst down the space highway, but superstar John Cho and another senior creative or two are sticking around, their children enrolled at local schools. The cinematic universe bubble knows no bounds, meanwhile, with Taika Waititi taking time out of filming in Australia to join a parent-teacher session at his kids’ Auckland school via Zoom, according to whispers in Jamboree ear. The story circulating around the corridors of the school is that while they were discussing the kids’ impressive progress, Thor strolled past in the background.

And in ice-cream news, Dai Henwood was seen eating a Magnum at a city-fringe BP. Judith Collins enjoyed a vanilla Trumpet at the netball. At a screening of Spiral: From the Book of Saw, The Masked Singer’s Clinton Randell was loving his choc-top. Don Brash noshed down a strawberry sundae at Newmarket Burger King. And in 2018, Marlon Williams devoured an ice-cream, alone, in the courtyard of the BNZ Centre, Christchurch.