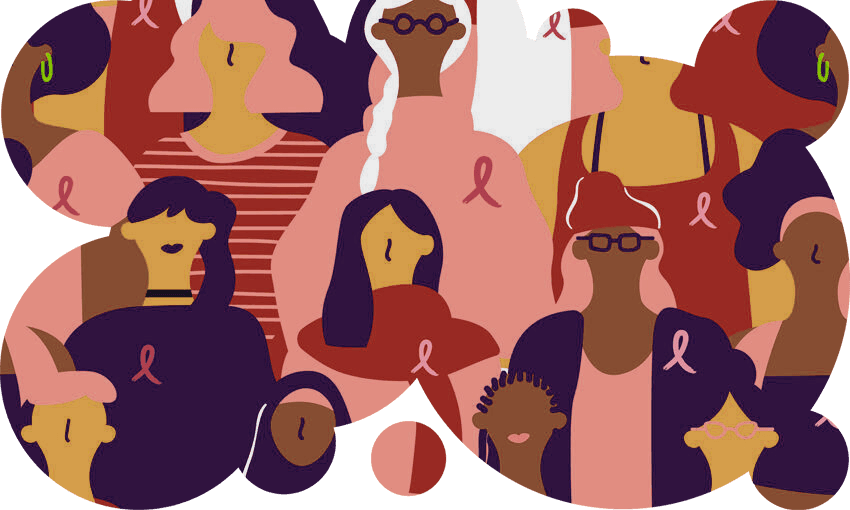 Pasifika women fall under the ‘vulnerable’ group when it comes to mammograms and are urged to get checked. (Image: Tina Tiller)

Pasifika women fall under the ‘vulnerable’ group when it comes to mammograms and are urged to get checked. (Image: Tina Tiller)

More than 50,000 New Zealand women are overdue for their mammograms – and the biggest decline in screening during the pandemic has been among Pasifika women.

“I had a lump in my breast big enough that I could point to it without even looking at it,” says Fuatino Leaupepetele, a dean at Bishop Viard College in Porirua. She was diagnosed with breast cancer on her mother’s birthday, when her daughter was just 10 months old.

She had a breast removed, her hair fell out, she dealt with more needles than she had ever dealt with in her life, and she dreaded the prospect of death.

Breast cancer is the most common cancer for women in Aotearoa. On average, nine women will hear the news today that they have breast cancer, and more than 650 women die of the disease every year.

Leaupepetele is Sāmoan. Nationally, around 170 Pacific women are diagnosed with invasive breast cancer each year – and this vulnerable group is the most at risk of dying from the cancer. Pacific women are more likely than all other ethnicities to have more aggressive grade three tumours, and have a much higher incidence of the higher-risk subtype HER2+ breast cancer.

Breast screening is free every two years for women aged 45 to 69, but first you have to register with Breast Screening Aotearoa. When Leaupepetele noticed the lump on her breast and went to her doctor to get it checked, she was just 35.

Today, 50,000 women in the country are overdue for their mammograms, the often lifesaving X-rays that are used to detect breast cancers. Pacific women have experienced the biggest decline in screening participation during the Covid-19 pandemic, due in part to the prolonged lockdown restrictions in Tāmaki Makaurau. “Living busy, hectic lives is another reason Pacific women struggle to get to their appointments,” says Dr Maryann Heather from Auckland healthcare centre Etu Pasifika. “Pacific people in general, but especially the women, have this mentality of putting everyone first before themselves and so getting a mammogram done isn’t seen as a priority, but we need to flip the script and let Pacific women know that they’re important and if you want to be around longer for the people you’re putting first, you have to prioritise your health.”

While some do find it uncomfortable, both Leaupepetele and Heather want to reassure women that getting a mammogram doesn’t hurt. “I have come across women who have heard stories that it’s a painful experience and that’s why they don’t want to get their mammograms done, but it’s not true,” Heather says. “There’s no pain when going for a mammogram and the awkward feeling doesn’t compare to experiencing breast cancer,” Leaupepetele adds. Television and radio presenter Stacey Morrison, a Breast Cancer Foundation NZ ambassador who qualified for the free screening a couple of years ago, describes her experience as “not even sore, but a little weird”.

In an effort to increase participation in breast cancer screening, Breast Cancer Foundation NZ this month launched the #GiveUsOurMammograms campaign, calling for action from the government to prevent avoidable deaths from breast cancer in Aotearoa. The campaign invites women to share photos with a #GiveUsOurMammograms poster that will then be delivered to government ministers.

“Breast screening is one of the most effective ways to reduce deaths from breast cancer,” says Adele Gautier, a research manager at the foundation, which is currently investigating an ultra-mobile screening unit to increase access to screening for Pacific communities. Gautier says the decline in participation in the last two years is likely to result in a higher percentage of systematic diagnoses in the future.

“It will cost around $15 million to address this issue and prevent women being diagnosed late,” Gautier says. “We have spoken to minister of health Andrew Little, associate minister of health Dr Ayesha Verrall, Māori and Pacific ministers as well as the prime minister [to tell them] that in order to do an extra 1,000 mammograms a week to catch up, we need extra funding, so $15 million is to help with mammogram costs, staff and creative ways to use our resources to create an intensive ‘follow-up’ programme that actually builds more capacity in the system for the long term,” she says.

For Heather, this issue is particularly close to home. In 2003, the doctor was working in American Sāmoa when she received a call from her mother back in Aotearoa to say she had been diagnosed with breast cancer. “It was interesting because I had two hats on, one as a doctor and one as a daughter. When I took my doctor hat off, I was emotional and I flew back to my mum in Wellington immediately,” Heather recalls.

It started with a lump on her mother’s breast that felt strange, so she decided to get a mammogram done. Getting checked immediately meant the specialists were able to pick up the cancer early, and she had surgery to remove the breast, went through chemotherapy and radiation and come out as a breast cancer survivor. Heather and her mother are now advocating for no further mammogram delays, especially now that Covid-19 restrictions have eased.

Gautier says during lockdown, especially under alert level four, screening clinics had to shut down, partly due to staff being deployed to help with Covid-19 efforts. “People were also worried about catching Covid if they turned up to their appointment,” she says. But now Aotearoa is at an orange traffic light setting, breast screenings have resumed.

Having open, truthful yet hard conversations about breast cancer with your loved ones helps debunk myths that mammograms are painful, Heather explains. “For many Pacific families, talking about our breasts is very much taboo and we tend to avoid or change the topic, but we need to normalise the discussion on mammograms and not feel embarrassed when reminding mum or your aunty about their appointment. That’s a massive factor in ensuring we all live longer to see our families flourish.”

Listen to Breast Assured on Apple Podcasts, Spotify or your favourite podcast provider.

How do you get a mammogram?