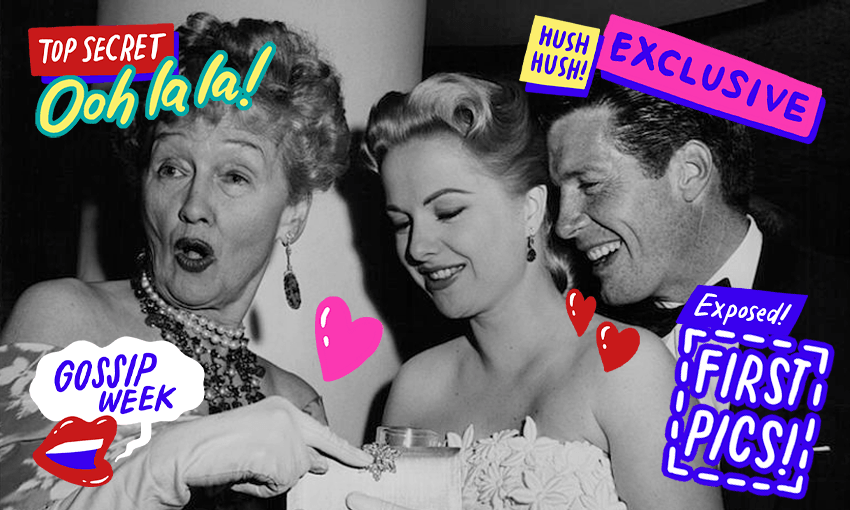 What history can teach us about the future of gossip

The sex scandals and secret pregnancies of Hollywood’s golden era might not seem like typical academic fodder but, for Associate Professor Jennifer Frost, the history of gossip has kept her busy for over a decade at the University of Auckland. Defining gossip as “private talk” – discussing the personal lives of people who are not present – US-born Frost has not just written the book on gossip, she’s done it twice over.

Her first book, Hedda Hopper’s Hollywood: Celebrity Gossip and American Conservatism, is about to turn 10 years old. The second, When Private Talk Goes Public: Gossip in United States History, is an anthology of essays edited by Frost covering everything from Salem’s witch trials to the birth of People magazine. In short, there’s perhaps nobody better in the world to have a gossip about gossip with as we end Gossip Week. So that’s exactly what I did.

How did you first become interested in gossip at this serious, academic level?

I remember being at the grocery store in the US and seeing all those really awful tabloid headlines blaring at us while we waited in line. It was around the time when Mike Tyson had domestic violence charges against his wife Robin Givens, and the woman in front of me started talking about the headlines. We ended up having this really long conversation about the people involved and, after I left, I couldn’t stop thinking about how interesting the exchange had been.

This was a woman I had never met before, who I knew nothing about and will probably never see again, having this really good conversation with a lot of shared values. We spoke about domestic violence, about marriage, and this was at a time when domestic violence wasn’t hugely talked about. It was seen as a personal issue, but we know now that it is a societal issue, a political issue, and something that shouldn’t be kept hidden in “private life”. The exchange really showed me the way gossip can have an important and necessary function in society.

What was the reaction when you decided to study something as controversial as gossip? Seems like something people could dismiss very easily.

People thought I was crazy, I can’t tell you how many conversations I have had trying to convince people in academia that gossip was a legitimate topic. I started thinking about how nobody talks about the positive side of gossip, we always talk about the negative. That’s when I got interested in trying to find a historical subject that would let me think about gossip in the past. Then I came across Hedda Hopper, who was a famous Hollywood gossip columnist from Hollywood’s golden age from the late 30s into the early 60s.

Working on her really helped me to learn more about gossip and sort of refine my take on it. Hopper put out the gossip we would see as “good gossip” – sharing news in the community, having the opportunity for discussion and exchange – as well as what we would call “bad gossip” where she’d be saying things to damage, injure and hurt people’s reputations personally and publicly. It helped my case that with Hopper was was very well recognised as powerful, I mean, she was on the cover of Time in 1947.

What else was interesting was that Hopper was very political. She was a conservative Republican and so her gossip was both about the worlds of entertainment as well as the world of politics. It’s actually the 10 year anniversary of my book about her, and there’s been a series of articles coming out reflecting on the findings of the book in the wake of Trump. Gossip was so important to his political rise and his political career, that now people are reconsidering a subject that, even 10 years ago, looked a little shaky.

Can you explain how gossip played such a key role in making Trump happen?

By combining gossip with entertainment and politics, Hedda Hopper really laid the foundation for the ways in which you could have a Trump-like figure succeed. He had no political background, he was a reality show star and he was able to take that intersection of entertainment and politics into the presidency. The other interesting thing is that he built his career in the 70s and it was exactly in that era that gossip went mainstream. In the early 70s is that the tabloid the National Inquirer went national and People magazine starts in 1974.

That was a pivotal moment because it was the first time there was a whole magazine trading in personality journalism. It’s about people’s personal lives, not always negative but always private in nature. Trump recognised early on how important this kind of gossip is. He fed information to the daily New York news, he was on the cover of People several times, he realised that aspects of his private life – his money, his wives, his so-called sexual prowess – were important to get out there into the public. So that’s what he did, and he did it very well.

The other thing about gossip, both celebrity and interpersonal, is that it builds relationships between people who participate in it. That’s another thing Trump did well: he built up this extraordinary fan base, where people thought they knew him personally. We still see that loyalty and that intimacy playing out today – if people think they know him, then they trust him. Finally, he used Twitter to gossip, commenting on Ted Cruz’s wife being ugly or Mario Rubio being short. It had nothing to do with their policies, or what they stood for, and it helped him get to the presidency.

What are your thoughts on the MeToo movement as an example of meaningful gossip?

What we are seeing now with MeToo actually has a very very long history. One of the big arguments made about gossip is that it can be used as a weapon of the weak. It can used by people without power in a society, to criticise the powerful or mobilise around them. An example from the UK would be the role of servants. If you even think of Downton Abbey, we already associate these sorts of roles with gossip. For women servants, gossip it was a way of warning others about a master who would be abusive. It goes way, way back – MeToo just brings that same function right up to the present day.

How about the future of gossip? What will you be keeping an eye on in the social media, misinformation age?

I am also very interested in how we combat Covid-19 rumours. For example, last year only 50% of Americans said they would get the vaccine. It’s now up to 70%. Why has it gone up? Because people have seen people they know and trust getting the vaccines. It reminds us that a social media rumour scaring people about the vaccine can be overcome by personal information shared in a circle of people who trust each other. We’ve got to focus on that. I know we need to fight misinformation, but where we can all fight back is in our face-to-face communities, our relationships, our neighbourhoods and our workplaces.

Any final words for people who write off gossip as thoughtless chit-chat?

Look – if you don’t like gossip, more power to you. But that doesn’t change the fact that it shapes our private lives, our social lives, and our political lives. I always think it’s always better to have an understanding of something to be able to change it, rather than being powerless before it.