Gossip Week: Three years ago, Zoe Lawton started an anonymous blog for people in the legal profession to share their stories of sexual harassment. Today, she reflects on the public impact of sharing this private information, and what needs to happen next for the #MeToo movement in Aotearoa.

In 2018, over 200 people shared these sorts of #MeToo stories on an online platform that I set up for the legal profession. Every anonymous writer shared deeply personal information about themselves and the actions of another person, actions that were largely unreported and yet to be proven true (at least under the law). The platform took off quickly due to the media coverage, ultimately receiving 50,000 views. During this time, I got an eye-opening crash course on the impact of #MeToo gossip.

The basic rules of the platform were that people who had personal experience of sexual harassment or assault – or those who had witnessed it happening to a colleague – could provide a written account to me that explained what happened in their own words. I would then review it and remove any identifying information about them, the alleged perpetrator, and any other people involved. Within 24 hours the anonymous account, only noting the gender and age range of the writer, was published online.

The accounts were predominantly provided by women of all ages and seniority levels within their legal firms. Many had never disclosed to anyone what had happened. If they had, it had only been to a small number of people – especially when the sexual harassment or assault took place behind closed doors with no witnesses. Others had undergone more public experiences, with their colleagues witnessing what happened.

Many people who provided stories told me it was cathartic to have their experience published online for all to read while still remaining anonymous. I was also contacted by a number of people who felt unable to share their experience online because it would be too traumatic for them, or because they were worried that certain details of their account might identify them (the legal profession is small). Despite this, they said they too felt a sense of comfort in knowing they weren’t alone.

Zoe Lawton’s blog made headlines in 2018

The platform was also read by a large number of people who had never been sexually harassed or assaulted. The feedback I received from some of these people was that the nature and extent of what their colleagues had experienced came either as a total shock or confirmed the gossip that had been whispered in workplaces for many years. In some cases, it prompted open discussions among staff in their workplaces for the first time.

Ultimately, the accounts on the platform played a part in prompting the New Zealand Law Society to undertake the first comprehensive workplace survey of sexual harassment and assault in the legal profession. An independent review of the culture of the legal profession was then undertaken by an expert panel led by former governor general Dame Silvia Cartwright. The online accounts were taken into consideration as part of the review and described as an important source of information that provided “the impetus for vital regulatory change”.


In my experience, sharing this anonymised gossip really made a large, positive impact. I’ve been asked why I didn’t take the next step and name individual perpetrators to hold them accountable, but I never intended for the platform to be a place to name and shame individuals. I simply wanted it to be a safe space for people to share their experiences and raise awareness within the legal profession and the wider public.

Publishing the names of individuals also comes with significant legal and financial risk. Anyone who publishes these details opens themselves to the risk of the alleged perpetrators making defamation claims and claiming significant financial compensation. If I had done this and a claim was made, the onus would have been on me to prove in court that the account I had published was true. In order to do this, the person providing the account would have been dragged into the legal proceedings to give evidence.

Since running the platform and doing my own research, one of the lessons I’ve learned is that many perpetrators sexually harass or assault multiple people over the course of their career. They start with one person who feels unable to report it on their own because the reporting process feels too daunting. There are no repercussions, so the perpetrator moves onto the next person and it becomes a pattern of behaviour throughout their careers, particularly as they take on more senior roles. 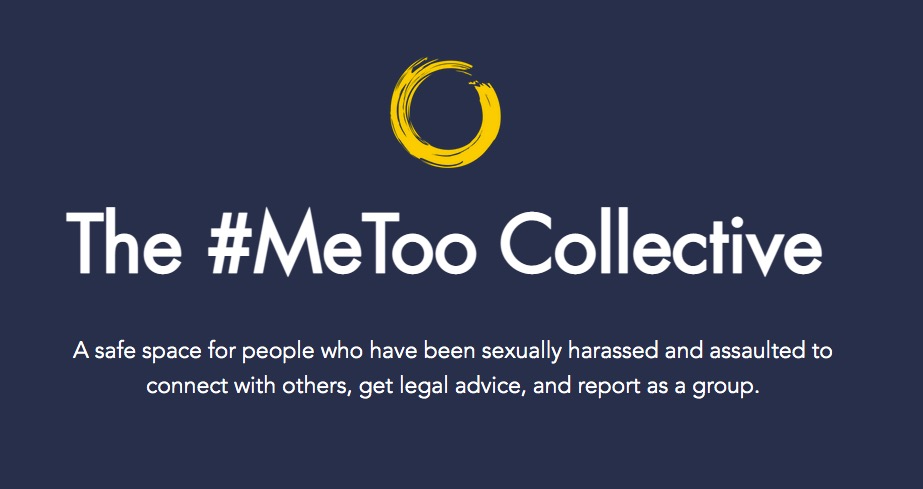 The #MeToo Collective is taking the movement to the next level

With this in mind, I’m in the early stages of setting up an independent charity called the #MeToo Collective. This will provide a new type of legal service that matches people who have been sexually harassed or assaulted by the same perpetrator. Once matched, each group can then decide whether to report as a group, with the assistance of a lawyer, to the Human Rights Commission, the Employment Relations Authority or the Police. People who have worked, now or in the past, within a range of professions and industries will be able to register with the charity and access the service.

Currently, few people want to make formal reports on their own. This is totally understandable, because it can be daunting and isolating to go through the process alone. But if people are given the option to come forward and take legal action in groups, it could be a game changer. It’s time to harness the power of #MeToo for those who need it most.

Zoë Lawton is a lawyer and researcher. You can read the online platform for the legal profession here and learn more about the #MeToo Collective here.