Australia Week: With the trans-Tasman travel bubble finally open, no one would blame you for jumping on a plane straight to the outback. But if airfares aren’t in your budget, here’s how to do a tour of Australia, New Zealand.

The bubble is here. We’ve waited patiently for this moment and like a birthday on February 29, it’s FINALLY come around. But also like a birthday, the build up was exciting and now the follow through seems expensive and time consuming and you’re not sure you want to make a big fuss any more. Instead of forking out hundreds for tickets across the ditch, why not experience the best Australia has to offer, from right here in New Zealand.

I spent a day travelling around some tourist hot spots – from trying on the coziest of footwear to visiting the tazzie devils themselves – and now give you my perfect itinerary for a day in Australia, Auckland, New Zealand.

9am: On the morning of your international domestic travel experience, you need to get in the spirit of Australia. Simple. Two slices of Vegemite on toast, washed down with a flat white, or if it suits you, a lukewarm Fosters.

9.30am: Brekky, done. If you’re still lacking that Oz feeling, now’s the time to chuck on some absolute tunes. This playlist of 15 different versions of Waltzing Matilda might help, but if you like a bit of variation in your playlists, this one called Legendary Aussie Classics is filled with heaps of legendary Aussie classics.

11am: Now it’s time to get dressed for the day. That tee from Sydney 2007 with a koala on it will come in handy here. Channel your inner tourist. Binoculars? Bloody oath. Practical sandals? Beauty. Can’t find a cork hat? No wuckas! Tie some beads to a cowboy hat. This one I made cost $10 and kept the pesky flies off my face all day. 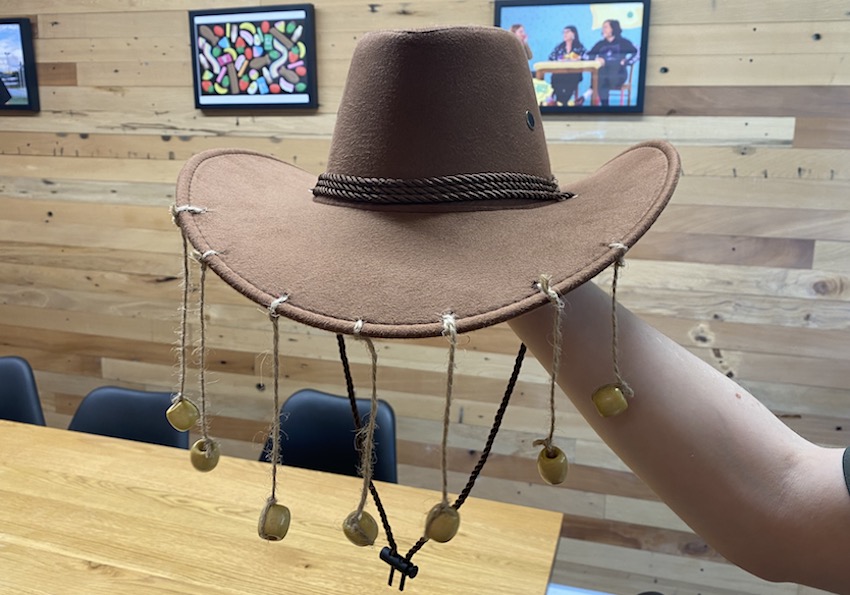 Sometimes all it takes is $10, a Look Sharp, and a stupid idea (Photo: Alice Webb-Liddall)

11.30: It’s time to head to the outback, in a way, by catching the train to Auckland Zoo. It’s the most authentically Aussie way to travel around our largest city, because a lot of our electric trains have been imported from our cuzzies across the ditch. Take a seat and think of Sydney as the ghosts of the metropolitan Australians these seats once carried pace up and down the aisles, pushing the green button with their ghost fingers. (There’s no train that actually goes to the zoo though, so if you don’t want the 37 minute walk from either Morningside station or Baldwin Street, maybe take the bus.)

Once you’re at the zoo, it doesn’t take long to find Australia Bush Track, where Aussie animals roam in sometimes scary proximity to wandering visitors. Here, you’ll find the cork hat becomes a bit of a liability as the emu decide whether the dangling wooden beads hanging in front of your eyes are worth pecking.

A red-tailed black cockatoo might swoop you in the Australian bird aviary, and you might scream “crikey dick!” when it does, because it’s huge. An old lady punter might then tell you off for wearing a cork hat and ask you to take it off, but you won’t. Advance Australia fair. 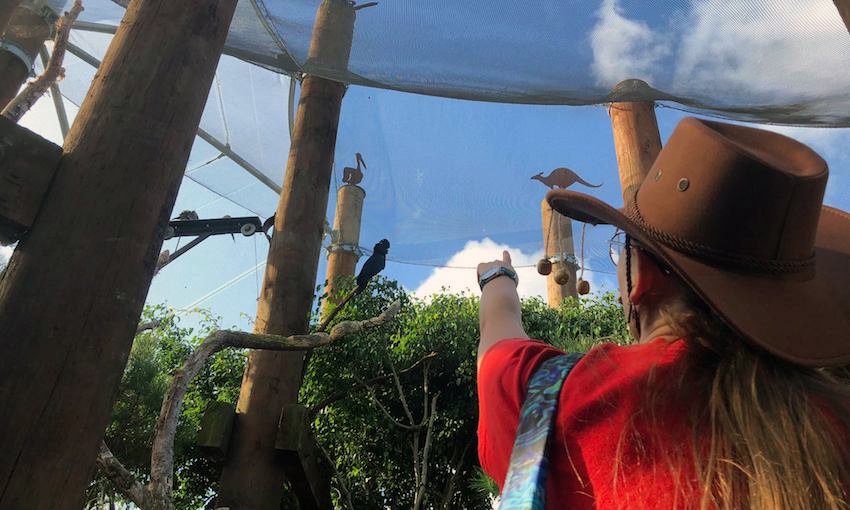 Me and a red-tailed black cockatoo, which shortly after this photo was taken, attacked (Photo: Mollie Fox Fraser)

Twice during the day the zoo puts on a Strangely Beautiful Australia talk, where you can get up close and personal with some lizards and a sulfur-crested cockatoo named Captain. If you crafted your cork hat using jute twine like I did, you’ll realise why the other bird swooped at you as you notice cobs of corn and kumara strung up with the same string for Captain’s dinner. Now is the point you might take off the hat. The old sheila was right.

2pm: After a day walking through the outback, the feet could do with some rest. Luckily, just a short bus ride away is St Lukes Mall, the eighth wonder of the world. Disappointed in the zoo’s lack of egg-laying mammals? Don’t worry, the mall’s got it sorted. Under the neon lights of Platypus shoes on the ground floor you can try on some Vans, maybe a Doc Martin – or if you’re really in the Platypus zone, a semiaquatic shoe like a Teva would get you even closer to the legendary Aussie animal. 2.20pm: Aussie shoes deserve Aussie Sox. Luckily there’s an Aussie Sox about 50m away from Platypus in St Lukes Mall. Remember to bring your binoculars because this one’s easy to miss, though locals will know exactly where the hats and sockettes sit under the fluorescent lights outside Farmers. It’s a modest stall offering the best sock bargains this side of the equator. The woman sorting the displays will offer you a mirror as you try on some of the hats – a slight confusion registering when she sees your DIY cork lid and realises that’s not something she sells. 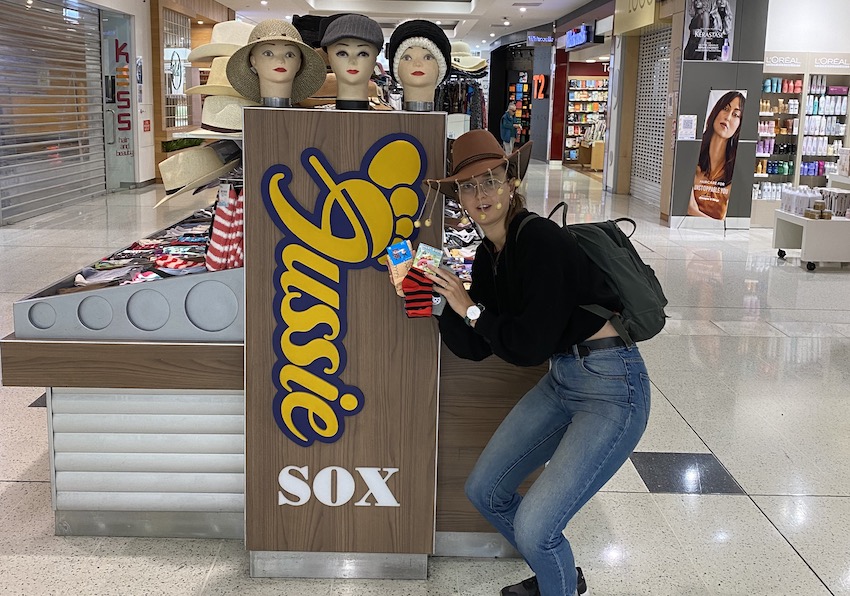 3pm: The last stop on the Australian tour of Auckland requires a bit of light travel. The Original Aussie Butcher has shops in New Lynn, Botany, Henderson, Mt Roskill and Kumeu, and sells the finest New Zealand meat ever produced. Do they sell kangaroo? No. Do they sell croc? Piss off, ya drongo! The Original Aussie Butcher only sells the best of New Zealand pork, beef, lamb and chicken. Did I actually go there myself? Get real, I don’t eat meat. I did the second-best thing. Taking tips from all the best zoos and tourist hotspots in the world, I stood in front of a green screen and then paid myself $45 for a keyring with this photo in it. 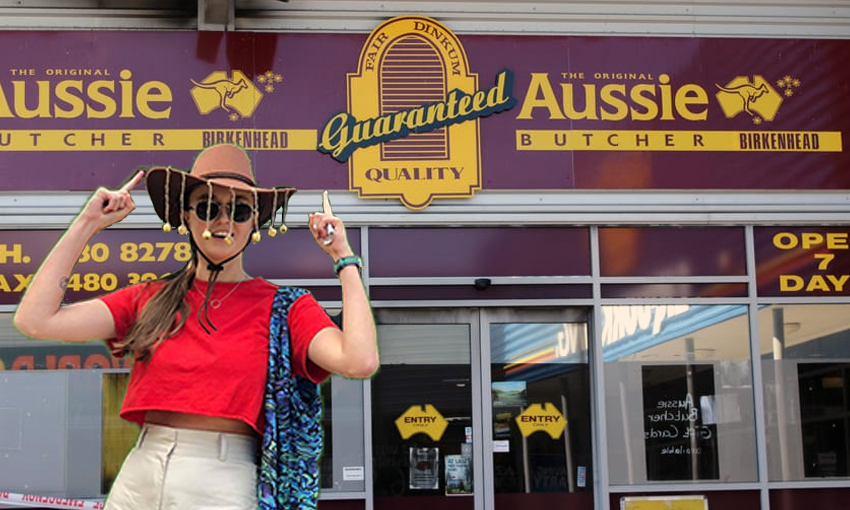 Though it might be nice to experience it all from across the Tasman, we don’t need to get on a plane to experience the wonders of Australia: land of golden soil and wealth for toil. We just need a good pair of walking shoes and a fresh perspective. As Aussie Sox put it themselves, on their website: 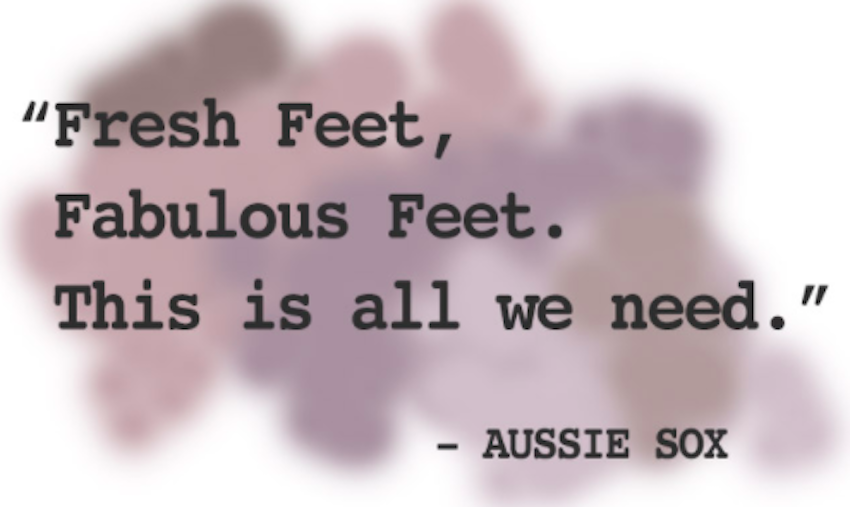 Thank you Mr/Mrs Sox, whoever you are.

In the latest episode of Dietary Requirements, we discuss the culinary pros and cons of crossing the Tasman now the travel bubble is open. Subscribe and listen on Apple Podcasts, Spotify or your favourite podcast provider.