After many anxiety-filled commutes, Alex Casey gets to the bottom of an Auckland train mystery.

Every morning I think things will be different. As the train rolls into my stop, I rise out of my seat with a slow dignity normally reserved for nobility, or the elderly. I calmly glide towards the door and adopt a subtle warrior pose. I am queen of the carriage, brave opener of doors, commuting hero. I stare stoically out the scratched window to the horizon, breathing in and out slowly as the flashing green button taunts me in the peripherals. Don’t look at it. You don’t need it. Don’t press it. Don’t. Give. In.

When the train comes to a complete stop, everything changes in an instant. My breathing quickens, my face and eyes turn bright red, the whole carriage begins chanting “shame, shame, shame”. I lunge towards the flashing green “open door” button with the ferocity of Bilbo having one more hoon on the ring. Alas, by the time I complete my panic-push, the doors have already started opening, just like they were always going to. The queen of the carriage tumbles out, disgraced, a pauper of the platform. 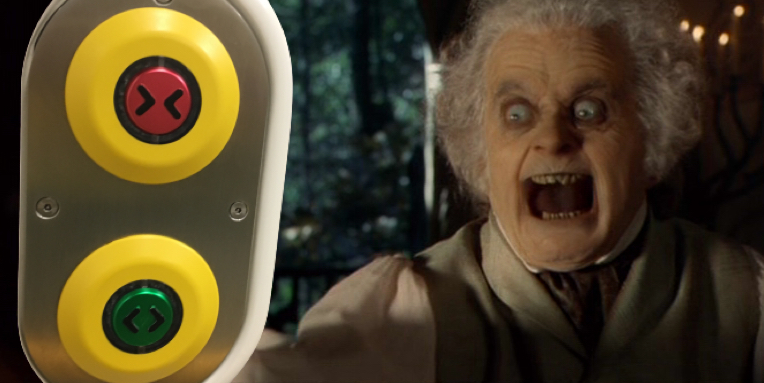 Me, every morning and evening

As we all returned to work after the long Easter weekend, I needed answers after years of wondering. Do Aucklanders actually need to push the green button for the train doors to open? Or are we all just rats trapped in a mad scientist’s maze, frantically pushing dummy buttons in pursuit of illustrious freedom cheese? None of the commuters I spoke to seemed to know. Some assumed the doors were automated, but had suspicions. Others thought it was only necessary in peak times. Some had never even entertained the idea that they didn’t have total button-based control.

An Auckland Transport spokesperson heard my confused call. “No need to push the button,” they replied briskly. “All the doors are on automatic.” As it turns out, the doors have been automated in peak times and on busy platforms (Newmarket and Britomart) since 2017. But wait, there’s more. Since this time last year they’ve been fully automated – every door, every train line, every time of day. “The reason the doors were made automated was because of Covid, to avoid people touching the buttons and potentially spreading germs,” AT explained.

So, do people actually know they don’t need to press the button any more? A brief survey of the office suggested they didn’t. According to AT, the door automation last year was communicated to the broader public through “a little bit of social media activity” and the removal of the audio announcement to “push the green button, when lit”. Although the omniscient god-like voice is gone, the flashing ring around the button remains a come hither to many commuters. “I push because it’s flashing at me and it seems important,” said Stanley*, a serial pusher. 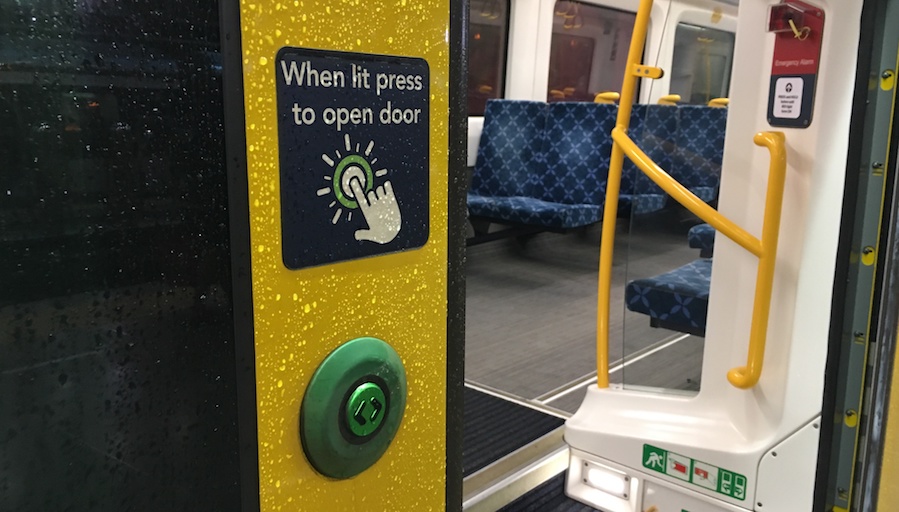 One day I decided to take note of just how many people remain completely at the mercy of the button. It was bucketing down with rain at the Mount Albert station, and everyone was huddled under the shelter, out of reach of the button, when the train arrived. Straight off the bat, we were faced with the ultimate conundrum – does the fear of getting wet outweigh the fear of the doors not opening? It only took a couple of seconds for someone to cave, tiptoeing over a giant puddle to proudly get their hit of green.

The barmy button army continued once I was inside the train. At Baldwin Ave, I watched a man nervously inch back and forth towards the button, before giving a big old Kiwi push. In Kingsland, one trigger happy punter gave it a nudge before the train had even stopped moving. In Grafton, I saw a woman in scrubs hover her hand above the button for 30 seconds before relenting. The man in front of me watching My Name is Earl on his phone? You bet he gave that button hell when we arrived in Newmarket.

When I later revealed to some seasoned commuters that they needn’t press the button at all, I was met with shock, outrage and confusion. “It feels like a hidden camera prank, I hate it,” said Mitzi*. “I’m going keep pressing,” said Frida*. “I’m a traditionalist.” Others took a more zen approach to the automation. “Well, I used to press the button because I was rushing and stressed and lost in thought,” said Billy*. “Now I’m relaxed and in no rush, present enough to know and accept that the door will open when it will.”

Psychologist Sara Chatwin isn’t surprised to hear that many commuters have had a hard time giving up the button. “I would say the strongest motivator for button-pressing will be habitual – it was something that people did before Covid, so it’s something that they are going to continue to do.” People can often adopt an autopilot state on their commute, she says, with their mind on work or what awaits them at home. “There will be a percentage of people who forget and just press it because it’s there.” Britomart: where the doors will (hopefully) always open

My field research revealed some deeper psychological concerns. “I will keep pressing the button, just to be safe,” said Pat*. “There could be a technical error and I don’t want to get stuck in the carriage.” Chatwin expects some people will have a lack of trust in the automated process. “As humans we struggle to trust machines,” she said. “These types of people might have experienced a machine going wrong and have some residual trauma there.” One commuter, Suzie*, had a particularly shameful experience. “There was a time I was waiting to get off in Sunnyvale and the doors didn’t open,” she said. “I was left standing there like a fool.”

Something we’ve all experienced, and continue to experience, is life under Covid-19. Chatwin says this is another major factor in people wanting control over their own lives, even if only through something as small as a button. “Everyone’s anxiety levels have been quite high over the last year. As human beings, we quite like certainty – most of us like to cross those t’s and dot the i’s. I think that if pressing a button assures you that the doors are going to open and you’ll have an outcome, that makes a lot of sense.”

AT is well aware that many people are still pushing the button. “Some people still do it, but less so in the past year with Covid,” a spokesperson said. Even though we now know spread of the virus via a simple bin lid or a cheeky lift button isn’t as likely as first thought, you’d still hope measures are in place to protect the button buffs. Indeed they are, said the spokesperson: during routine cleaning, AT ensures the internal and external buttons are regularly wiped, alongside all other touch surfaces. The internal buttons even receive bonus “fogging” due to use.

Here’s one button you should press – the SUBSCRIBE button on Remember When… Find it on Apple Podcasts, Spotify or your favourite podcast provider.