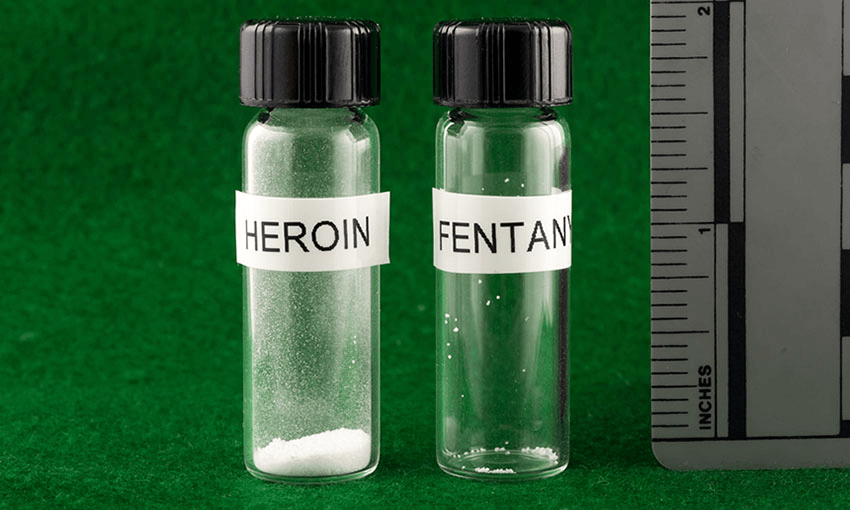 The world’s most dangerous drug has arrived in New Zealand

A freakishly potent opioid has been discovered at a music festival in New Zealand. What is it, and what does its presence in this country mean?

Fentanyl, a drug responsible for thousands upon thousands of overdose deaths in the US and Europe, has been discovered at a festival in New Zealand.

Just three milligrams of fentanyl is enough to kill the average sized man – an ant weighs somewhere around four milligrams.

This is the drug that killed Prince, Michael Jackson and Tom Petty.

While it has legitimate medical uses, in a palliative setting fentanyl is administered by precisely dosed strips.

The fentanyl discovered in New Zealand was in a powdered form assumed by the user to be heroin. A teaspoon of powdered fentanyl could kill upwards of 1000 people. This not only makes it incredibly dangerous, but far easier to smuggle: a teaspoon of fentanyl bought on the dark web is far more valuable than a teaspoon of heroin, and a huge number of commercial doses can be sent in an envelope, rather than packaged into bales.

It is almost impossible to overstate how potent and dangerous it is – the difference between recreational use and a complete failure of the central nervous system is roughly a couple grains of sand, an amount near immeasurable without lab-grade equipment.

And should you overdose, you’re going to need significantly more naloxone than if it were heroin; a medication hard to come by quickly.

Who knows? New Zealand’s drug laws are such that KnowYourStuffNZ, the group who detected the drug, are forced to operate in the shadows lest they attract the eye of the law. In fact, they were unable to even disclose they’d found fentanyl at the time in order to anonymise the festival in which they were working.

That seems unfortunate. Why?

Because our drug laws are absolutely cooked.

While KnowYourStuffNZ operate legally, the volunteer-led effort exist nonetheless in a legal grey area. For example, prospective drug users must prepare and handle the substances themselves. KnowYourStuffNZ have to do all of their testing with the client present, limiting the time they’ve got – particularly as people holding on to drugs generally want to boof them and get on with the party, especially if there’s a heavy police presence.

And, as they don’t handle substances, if KnowYourStuffNZ can’t identify the potentially lethal drug in front of them, they’re unable to send it on to a lab who can.

Further, under Section 12 of the Misuse of Drugs Act, it’s illegal to provide a venue for users to take drugs. As KnowYourStuffNZ say, what does this even mean in practice? Does having a drug testing service at a event mean that the event organiser is permitting their event to be used for taking drugs? What promoter wants to risk jail time over other people’s drug use?

Because of this uncertainty, KnowYourStuffNZ have to be discreet, with their services advertised solely by word of mouth. Tragically, this also means that should they find that huge amounts of deadly substances like fentanyl are flooding a festival, there’s nothing they can do to alert people on a large scale.

I don’t do opioids, so I’m sweet right?

Wrong! N-ethylpentylone, a cathinone which supposedly mimics MDMA (it’s in fact a seedy, cracky, paranoid high) was responsible for mass hospitalisations in Christchurch in February. Initially both the police and the DHB announced it was mephedrone, a different cathinone, before they were corrected by KnowYourStuffNZ, who use a spectrometer funded by the New Zealand Drug Foundation.

The machine matches samples with an internal database which must be updated manually as new substances are identified.

But because the shitty bath salts that find their way to New Zealand are mostly manufactured in China and not Europe, there are still cathinones floating about that not even KnowYourStuffNZ can identify.

It might shock you, but clandestine Chinese drug labs don’t really care for user safety.

The fact is, people do do drugs, and they’re going to regardless of the law, because that’s what they have done for millennia, all over the world.

Thirty years ago, New Zealand was the first country in the world to establish a national needle exchange programme, at the time a politically risky move but one that has directly driven our incredibly low rates of HIV and Hep-C – less than one percent of intravenous drug users in New Zealand have HIV.

Now that a new frontier has arrived in drug use, it seems incumbent upon our government to begin the process of reforming the rest of New Zealand’s dangerous and inequitable drug laws.