On the surface, Labour’s big housing announcement contained glimmers of good news for those struggling in New Zealand’s housing crisis. A $3.8 billion infrastructure fund could remove one barrier to new housing development. A $2 billion loan package for Kāinga Ora will go some way toward funding much-needed social and affordable housing. Both moves could help address our housing shortage, which is the biggest factor behind spiralling property prices.

Though those still don’t do enough to address our supply shortfall, prime minister Jacinda Ardern was likely hoping her announcement would be met with at least cautious hints of praise after she took the podium at the Beehive theatrette yesterday morning. She was badly mistaken. Unfortunately for Labour, all its waffly words about wanting to “make things better for first home buyers” and “cool off a housing bubble which might cause the catastrophic collapse of the entire economy” ended up being drowned out by a multi-hour plaintive wail of pain. The government had forgotten about one vulnerable group affected by its housing changes, and its members were absolutely steamed. 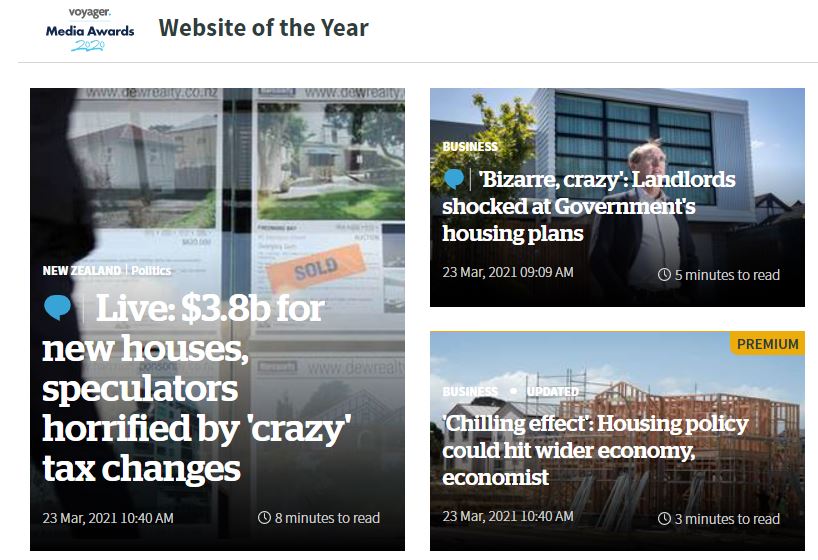 Chilling: The Herald’s front page yesterday says it all

Upset property speculators dominated the homepages of our biggest news sites following the housing announcement. Their most stinging criticism was reserved for the removal of a rule allowing them to claim a tax deduction on the interest payments on investment properties. “What, so every other business in New Zealand can still claim tax deductions, but not landlords? You’re joking! This is just bizarre, it’s crazy,” said Property Investors Federation president Andrew King. He said investors were already struggling with a healthy homes law forcing them to create survivable conditions inside their rentals, and now stood to lose out on tens of millions of dollars in tax breaks. The federation’s chief executive Sharon Cullwick said the law changes would cause large numbers of landlords to exit the market. Property investment consultant Ana Meredith, who recently said she bought five houses in one year “by not spending [her] evenings in front of mindless TV”, was upset at the tax break being removed. “This is a legitimate business expense,” she wrote on Instagram. “Where is John Key when you need him!”.

Even if Meredith can’t make up for the lost cash with her tele-watching time already cut to the bone, property investors might take some comfort in the fact their properties went up in value by an average of 21% last year, and $50,000 between January and February. Many economists would say that represents a “huge shitload” of profit, even if they bought recently.

Money isn’t everything though. Even a ginormous, Scrooge McDuck money vault-esque reservoir of lightly taxed profit might still be cold comfort to someone who’s used to having five or more properties, and may now have to make do with just  two, three, or even one. Renters United spokesman Ashok Jacob finds it hard to imagine that kind of suffering, having never owned a home. But he said some of his experiences might be helpful for investors as they face a new changed reality. “I survive on zero properties, so I have a lot of tips,” he said. “I try to make coffee instead of buying it, so that’s one. I get my vegetables from the farmer’s market. Just because the vegetables might look ugly doesn’t mean they can’t taste the same.”

Former BNZ chief economist Tony Alexander once urged aspiring homeowners to “go to cafes and spend as much on lattes, muffins, frappes, wraps, etc as often as the Baby Boomers did”. Lawyer Bruce Dell once said young people had to scrap their twice-yearly trips to Bali and addiction to leased BMWs to get a home. Jacob had similar advice for property investors now faced with paying a small amount more in tax. They had to realise that owning a home is meant to be hard, and self-sacrifice is necessary if they want to get a foothold in the current market, he said. “I support the landlord community in their struggle. I just think sometimes learning to love what you have, learning to be content, is important. It’s about personal growth.”

Green MP Chlöe Swarbrick said she could only pass on the advice she heard as a prospective first home buyer. “We were told to pull ourselves up by our bootstraps. [Get] maybe a part-time job… and reduce our avocado and flat white intake.” She pointed out that the game Monopoly was originally designed to warn against monopolisation of the inelastic resource of land, to the benefit of a few by excluding the many. “I guess the lesson is life isn’t an intentionally unfair board game, and we can change the rules,” she said. Women In Urbanism’s Emma McInnes was more magnanimous, saying she sent “aroha to this male-dominated profession, during this crisis”.


Jacob said it wasn’t just property investors; he had disappointments of his own with Labour’s housing announcement. He’d hoped there would be more to curb rent rises, given the bottom quintile of New Zealand renters currently hand over more than 50% of their income to landlords on average. That  statistic is associated with a host of social ills: people living in cars, spiralling government expenditure on emergency housing, and worst of all, children from cold, mouldy homes contracting and sometimes dying of diseases that have mostly been eliminated in developed countries.

“This housing crisis has hit renters the hardest. Not only are they locked out of the buyers market by ever-increasing rents but because of this shortage of supply, people are forced to live in substandard housing,” Jacob said. “If a landlord has to downsize or get rid of some of their homes, I hope they still have somewhere warm, spacious, and comfortable to live a healthy life.”

There’s no doubt property speculators are feeling the sting of Labour’s tax announcements. Finances might feel a little bit tight. There’s less certainty about how they’re going to put a roof over someone else’s head, in exchange for a tidy profit margin and, eventually, a huge capital windfall. But the good news for them is that it could always be worse: they could be the people who rent their extra houses.