In Auckland, a rich inner-city native ecology is being destroyed and most people have no idea. Climate and tree protection activist Steve Abel makes the case for the Western Springs Forest being much more than a nuisance.

It’s only April, but 2021 is already shaping up as Auckland’s year of the chainsaw.

The poisoning, ring barking and finally cutting down of the native grove at Canal Road in Avondale; the beheading and grinding of the giant 130-year-old macrocarpa, also in Avondale; and the killing of another mature native tree cluster in Epsom are just some of the more prominent and decried losses. But another gratuitous tree destruction exercise is under way at Western Springs. The number of trees that have already perished and the volume of living biomass that will be rendered to wood chips will exceed all the others combined.

We’re used to seeing Auckland Council wring its hands and blame greedy developers, private property rights, or the failure of central government to reinstate general tree protection for the city’s critical tree loss. However, in the case of the Western Springs Forest, it is Auckland Council itself that is doing the damage.

Because public knowledge and understanding of ecology and trees is low, and there is a longstanding dislike of pine trees in particular, cutting down some ageing and unsafe pines and replacing them with a native forest sounds like a good idea to most people. Until you learn an important detail: Western Springs Forest is already a native forest.

When I first encountered it up close in 2019 I felt the sense of awe you only really feel in a wild place. Gnarled vertigo-tall Monterey Pines stalked the hillside, standing sentinel over a burgeoning Gondwanan sub-canopy dominated by decades-old tree ferns. 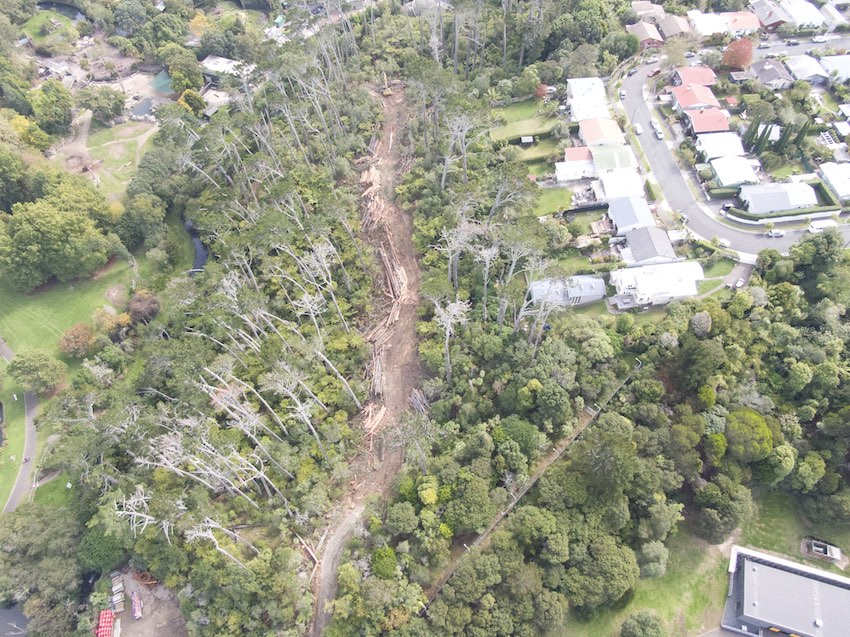 The logging track at Western Springs Forest from above (Photo: Supplied)

Western Springs Forest is designated a significant ecological area because of the richness of its native ecology. Thirty-year-old karo trees interspersed with red matipo and a dense variety of native tree ferns including ponga (silver fern) and māmaku form an understorey that is home to tūī, pīwakawaka, kōtare, ruru and spoonbills. It is habitat to copper skinks, pūriri moths, giant centipedes, wētā and a host of other native insects. The canopy of this forest is a stag-horned stand of 200 Monterey pines – planted in the 1920s to hold the hillside up around the time the stucco and brick workingmen’s cottages were built along West View and Garnet Roads. These trees are now nearly 100 years old.

Around 80 years ago, silver ferns were the first native vegetation to begin reclaiming the gullies under the then-youthful pines. Those same ferns are now tall elders with black cut-bristle trunks assembled alongside the lowest part of the public track. There are native plants that are rarely seen in urban settings, such as sickle spleenworts (petako) and drooping spleenworts (makawe), growing from the base of pine trunks, houndstongue (kōwaowao/paraharaha) clambers happily over long-fallen logs, and all manner of weird and colourful fungi sprout in the autumn from the rich decaying biomass supplied by the pines. Kōtuku (white heron) peruse the lake from the high pine canopy.

While there has been patchy management, including random felling of trees, and occasional planting programmes of specimen natives in the last few decades, this forest is primarily a product of organic regeneration. Western Springs Forest sprouted from the wild seedstock and the deep wisdom of ecological self-selection. That makes it much more interesting and original than anything we (or Auckland Council) could dream up to replace it with. Far more than Jaggers Bush or the Domain, this ragged stand feels like a wild forest. The hole cut in the forest, as seen from Western Springs’ playing field (Photo: Steve Abel)

A few years ago, on the pretext of safety, it was determined that every last one of the pines must be felled. This has been strongly contested. Chris Benton is the only arboricultural expert to study and make an industry-standard safety assessment of each and every one (in 2019) of the 200 pines. Benton is scathing of the council’s conclusion to fell them. He cites only three pines that need to be removed and a further six that require urgent pruning or some other management. Another respected arborist, Craig Webb, peer reviewed the Benton report and assessed that “the vast majority of pine trees in the forest pose a low or very low risk of harm” and all trees were within what is considered “tolerable” risk. Even the most recent council-commissioned arboricultural risk report suggests that only 26% of the trees need some degree of management for safety.

These trees are 35-45 metres tall, placing them in the category of the tallest trees in Auckland. The bigger ones weigh as much as 15 tons each. If all the tree trunks in the stand were lined up end to end they would stretch six kilometres. Having razed a logging track through the dense heart of the forest this month, the council will not helicopter, or sectionally fell, but topple – logging style – every last pine down on top of the native understorey. As their full weight and stature crashes down with canopies intact they will smash and disintegrate the 80-year-old punga and other native trees below them. Thousands of native plants will be split, shattered and killed. Dozens of native birds, and countless lizards and insects will be homeless as winter sets in. Even according to the council’s own conservative projections, the plan will damage up to half of the existing native bush.

This process is being described as the Western Springs Native Bush Restoration Project. But restoration only describes what will be attempted following the destruction of the existing native forest and eradication of the pines. It is the twisted logic of killing a forest to make a forest. We only need to look at the council’s post-pine-removal restoration efforts at the Bullock Track and the lower section of Newmarket Park to know how bad they are at this – these are dry and moribund native plantations burdened by kikuyu and lacking any ecological complexity.

The scores of pine stumps and felled trunks will remain at Western Springs. Along the road sliced through the forest, fewer than 8,000 native plants are to be planted. More than a quarter of these plants are grasses rather than trees or shrubs. The death rate of such plantings can be as high as 80% as unwatered saplings wither over their first summer. With failures, the replacements amount to fewer than half of the around 15,000 native plants, including decades old trees, that will be smashed by the plan. In a climate emergency we don’t have the luxury of killing native trees just to plant some more. Without the shelter of the canopy and thick understorey, the heat of the sun and the constant westerly wind will burn off dozens more ferns and damp-loving species. It will require monumental effort to keep light-loving weeds and pests out of the steep incline. Mile-a-minute weed is already champing at the edges, waiting to invade the hillside.

What’s the alternative? Over the past two years in particular, the community assembled the case for a plan B based on the contemporary wisdom of “low-interference ecological management” – a term borrowed from celebrated botanist Hugh Wilson, who successfully restored Hinewai in Banks Peninsula. The principle is that you’re better to work with what you’ve got to achieve native restoration rather than the old-school ethos of smashing things down to build them up again from scratch. Low-interference management has a deeper respect for natural processes and pays attention to what is already there. It takes a humbler view of what humans are capable of when we mess with nature. 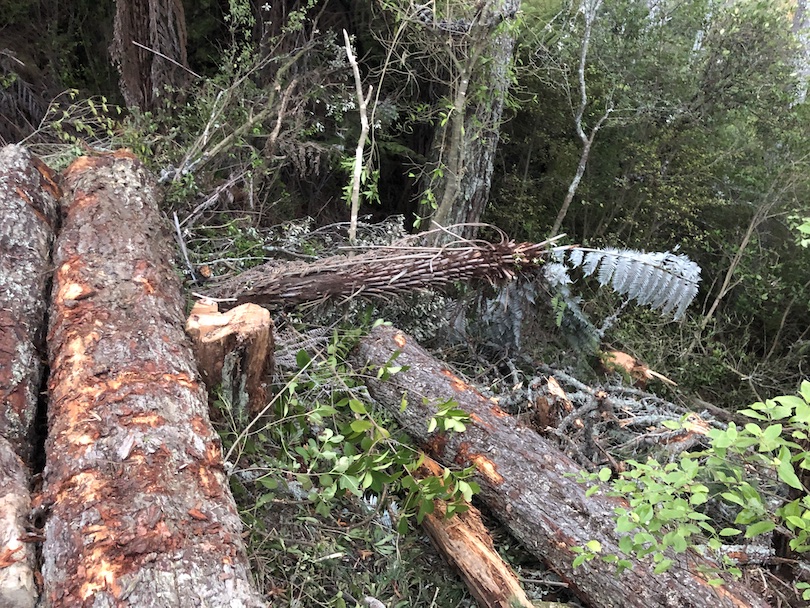 The case for development of such a plan was presented to the Waitematā Local Board on numerous occasions by community members and experts in ecology and arboriculture. When the board determined in September 2020 that it would work with the community on a plan B, the council charged on in spite of the voices of local residents, independent expert evidence, and community opposition. The logging plan was pushed through the relatively new local board by three votes to four late last year.

The institutional disdain that Auckland Council appears to have for the community it serves has shown itself at the Canal Road native grove in Avondale, around the Waiheke Island marina, and the Mataharehare pā pōhutukawa. Now it is also at work in the fate of Western Springs Forest.

The community plan was to look at the forest as an ecology rather than merely a stand of pines. It would have still involved thousands of supplementary plantings but only piecemeal removal of the unsafe canopy trees when necessary, while most would remain in recognition of their vital part in the structure and nourishment of the forest. Over many decades a gentle transition to entirely native vegetation would be complete. With this plan the character of Western Springs Forest would not be lost in the carnage that the children of West View Road, for whom the forest is a wild playground, are now witnessing from their bedroom windows.

On Friday April 9, the council contractors TreeScape began actively cutting down dozens of native trees. Among the casualties were a 10-15-year-old kauri tree and a 25-30-year-old pōhutukawa tree. Mature silver ferns (ponga), whekī, as well as over a dozen other self-seeded native trees including red matipo, coprosma, karo and pittosporum were also felled.

Despite hindrance from protesters sitting in trees and on diggers, the contractor’s logging track has continued to demolish everything in its path. It is over 30 metres wide in places. Pine logs are piled on top of native vegetation and cut ponga and pittosporum are slung onto the living bush. It will only get worse as more and more pines are toppled onto the understorey. This is not what the public imagined when they heard talk of a native bush restoration.

Like Canal Road, the character of the forest at Western Springs is of its place, has its own natural and human history, and is a unique part of our urban ngahere. The gangly pines have inherent value and amenity. They store carbon, calm the wind, temper deluges and – visible from kilometres away – are part of the visual heritage of many parts of the city. In our era of climate change and biodiversity collapse, Western Springs Forest should be something to be respected and treasured, not razed to mud.

Active publicly funded destruction of the forest is a crime against nature but, perhaps worst of all, it is committed against the wishes, wisdom and vision of the local residents. They knew the pines were not unsafe. They lived with their daily sway and heard the joy of tūī in their upper branches. They weeded and trapped pests, collected rubbish, and documented the native flora and fauna beneath. They knew how special it was. It is their homes right now that shudder as the forest is laid waste.