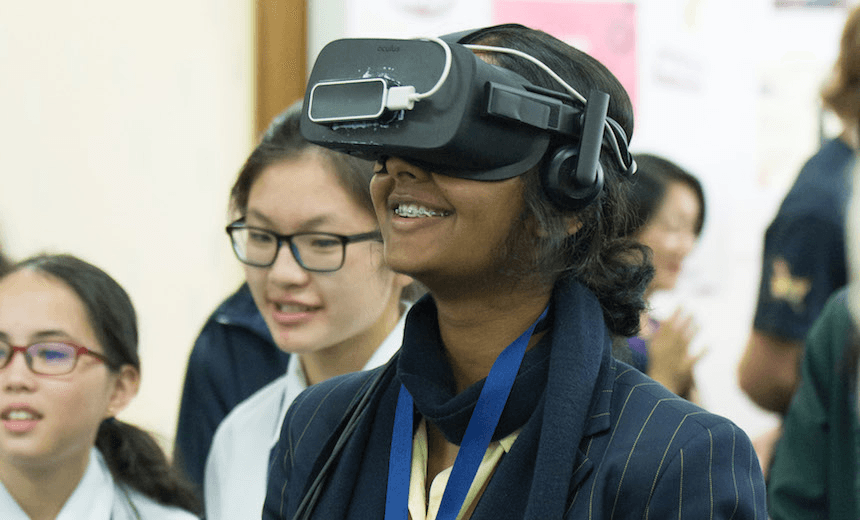 A young woman looks into the future of tech (Image:Supplied)

‘We created it for New Zealand’: A TechWeek wrap-up with director Jennifer Clamp

A young woman looks into the future of tech (Image:Supplied)

As TechWeek’17 comes to an end, Henry Oliver spoke to national director Jennifer Clamp about what she’s learned from the newer and bigger 2017 event.

TechWeek’17 has wrapped up after 173 events in 24 towns across the country. Branching out from an Auckland-focused week last year, TechWeek’17 went national, with events even being held in Mahia, Waipukurau, and Westport. It was a big move for an essentially grassroots collaboration but by all accounts it paid off and looks to only grow from here. Henry Oliver managed to grab some time with national director Jennifer Clamp to find out what she’d learned from the past nine days and her plans for future TechWeek events.

How is it different having a national event rather than an Auckland focused event?

It was amazing last year because we were just so…I think the word is probably humbled. For 55 event organisers last year to be a part of TechWeek when they didn’t really know what it was going to be or what it was going to look like, we were really grateful to them for being a part of it. This year, it’s all over again. After last year, the organisers in Auckland had a bit of an idea of what to expect, but this year there were five times the number of events and across the country so a number of towns and cities that came on board that really didn’t know what to expect. And they made it their own. I didn’t get everywhere, obviously, but just getting down to Christchurch and Wellington and seeing how it picked up in Auckland, I just felt very grateful and very proud. People have taken their own interpretation and they had their TechWeek tee shirts on and talked about being part of TechWeek proudly. We created it for New Zealand so that people are taking it and grabbing hold and making it their own which is exactly what we wanted. It’s just nice when things turn out the way that you’d hoped.

How many events could you get to over a week and a bit?

The most I managed to get to in a day was about five. I think in the end it would be somewhere between 15 and 20 events across the week.

There’s really quite a broad scope in terms of topics and audience sizes for all these events, and you would’ve seen probably more than anyone else. Were there any themes or unifying elements that you felt were running through it? Or were there any big topics that transcended the niche audience?

There were actually five topics that we chose to talk about to use to promote TechWeek. And we chose them off the first round of submissions that we received. It was December last year and we’d received just over 100 proposals for events and the topics that we pulled out of those were equality, environmental shift, next generation, the future of food, and then scaling impact – that’s looking more at what are the technology business models and networks that are going to help businesses to grow. That equality conversation we saw come through really strongly and that was great to see because it is a really important conversation to be having. Whilst we’re developing and making use of these new technologies, we need to be thinking about the social implications are and how to develop products that don’t create an even greater divide. Whether that’s economically or sociologically. Then the education topic came through really strongly as well, and the scaling impact, of course. Our big conferences were around AR\VR, so augmented reality and virtual reality came through really strongly. We had another big conference that was BlockChain and that conversation carried over into the future of money. What was quite interesting for me to see was even events that were about different topics, like an investment event, they still had quite a strong focus on AgTech [agricultural technology]. So even when an event wasn’t titled as a food event or an AgTech event, it still came up quite often. Definitely saw that with Ag, and saw that with AR\VR and artificial intelligence too.

Did you see any change or differences in the tech scene over the past year that you noticed?

We’ve built on last year and have made it a national conversation. It is really important to be having these conversations across the country, because these little pockets of enthusiasts can end up feeling quite isolated and that’s part of why we run TechWeek, to provide greater visibility across the whole country and where the expertise is in these emerging technologies so that we can better leverage them as a country. Find pairs or find people to work with.

A lot of it is obviously very forward looking. What are the things that you think will be more heavily featured next year? What are the growth areas of interest for New Zealanders who are already interested in technology.

I wouldn’t try to position myself as a technology futurist. I’d give you a very amateur answer, if anything.

There were a number of areas that came through a little bit this year but that I think are prominently realised. It kinda falls under environmental shift, but space is one of them. We did see the hardware aerospace meet-up this year which was really well attended, that was a fantastic event. There was Mission to Mars that happened in Wellington which was aimed at teachers. But I think that’s an area that was probably underrepresented this year or that there is definitely growing activity in that area. Health tech was another area that didn’t really come through that strongly. And biotech, where I think we’ve got some real strengths. But whether or not they come through next year, TechWeek we’ve shaped to a certain extent but it’s really shaped by what business and technologies there are in New Zealand that are doing the work and being willing to tell their stories during TechWeek. So we rely, to a certain extent, on the appetite of the industry.

Any other observations or reflections over the past nine days?

We’ve created TechWeek really to benefit New Zealand and New Zealand business. So success is if people make it their own as it is a grassroots platform that businesses come forward and make the most of for themselves, and same with partners. So I guess the big thing this year is just feeling really great seeing so many people make it their own, and them excited to continue to tell that story or New Zealand technology and innovation. Just great to see it come to life, to see that momentum building and keep feeling proud and wanting to step up and share the work that they’re doing.