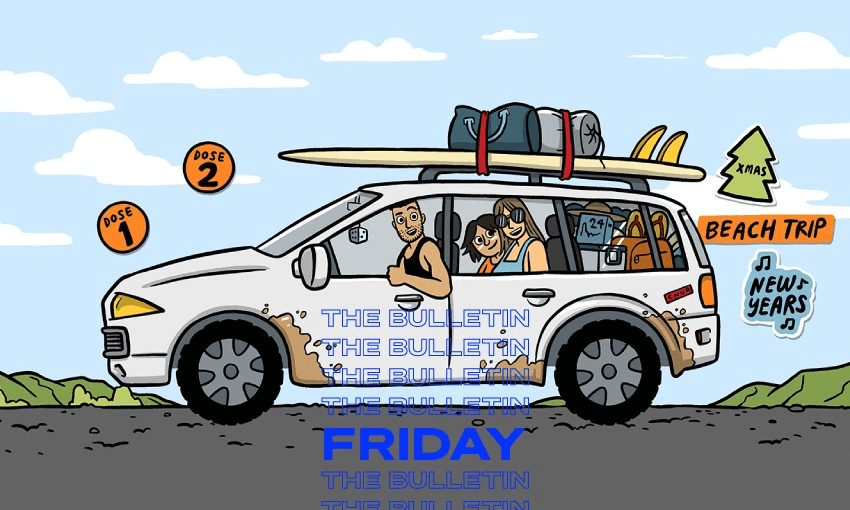 A few precautions can make sure you have a safer summer. (Toby Morris)

Welcome to your new normal

A few precautions can make sure you have a safer summer. (Toby Morris)

It won’t be a classic Christmas, but here are some tips for the rest of December as restrictions ease and Aucklanders can soon begin to travel, Justin Giovannetti writes in The Bulletin.

Our new colour-coded lives. Starting today, the few remaining weeks of this year will look different for New Zealanders. After months of lockdown, Aucklanders will feel a return to something approaching normalcy with the start of the traffic light system. You can now sit inside your favourite café and slowly enjoy that flat white. For those who are unvaccinated, immunocompromised or in regions with low vaccination levels, the easing of restrictions could add to your anxiety. Despite the promise, it won’t be a classic Kiwi summer. But that doesn’t mean we can’t enjoy it.

Should I travel? One of the main questions people might have right now is whether they should be booking flights and preparing to head out, especially after the Auckland border lifts on December 15. The traffic light system really means a shift towards personal choices. The era of one big decision for the team of five million is gone, now replaced by five million small decisions every day. The researchers at Te Matatini o te Hōrapa have tips on The Spinoff about how to keep safe and reduce your exposure risk. Their main advice: prioritise your plans over the two weeks before you leave on holiday. Do you really need to go to that indoor office Christmas party?

While Rhythm and Vines has been postponed to 2022 (see RNZ for details), there’s a lot Aucklanders can do closer to home. Throughout 107 days of lockdown, there have been a lot of cinema releases. Stuff has written a guide to which movies you should watch first. Most of your plans will involve a vaccine pass. If you need help sorting that, The Spinoff has easy instructions to get you started.

There will be checkpoints heading into Northland. Police confirmed yesterday that they will work with iwi in Northland to manage checkpoints after the Auckland border is relaxed, RNZ reports. The checkpoints will enforce vaccination and testing requirements. Some Pacific leaders have also called on people not to travel, telling Stuff that holidaying should wait until Māori and Pacific vaccination levels increase.

There have been warnings that case numbers will rise. The NZ Herald reports that schools in Waikato have been warned to expect a surge in cases by the end of the year, up to 91 a day. If case numbers increase as expected, New Zealand’s outbreak will enter uncharted territory. Contradicting that advice, health minister Andrew Little said yesterday that he doesn’t expect overall case numbers to increase in the coming weeks, but he does expect them to appear in new places. As a sign of that, there were long lines in Nelson yesterday as people went to testing centres after two new clusters were detected. According to the Nelson Mail, it isn’t clear where the outbreak began. A few hours later, three cases were reported in New Plymouth. Despite the warnings, Covid-19 is unpredictable. Auckland’s outbreak has plateaued, far below where many experts had projected. The health ministry declined to share its projections earlier this week. Sir Brian Roche, speaking with the NZ Herald’s Derek Cheng, said that the health system has coped well so far and he has no reason to believe it won’t continue to do so.

Traffic lights aren’t without some controversy. Investigating the new Covid-19 system, The Spinoff’s Toby Manhire made a discovery about the officially understood colour of physical traffic lights. Despite appearing orange, they aren’t actually orange, according to traffic officials.