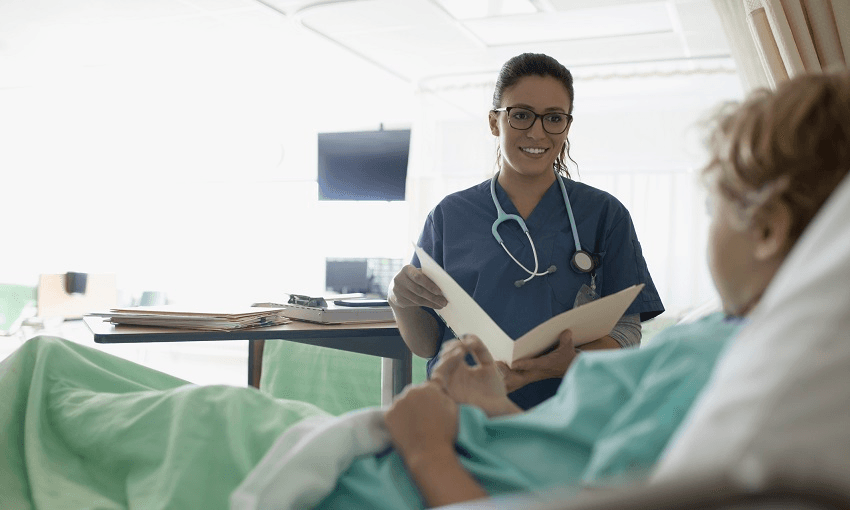 The Bulletin: Nurses use leverage in strike vote

Good morning and welcome to The Bulletin. In today’s edition: Nurses vote to go out on strike tomorrow, low key virtual APEC talks take place, and Supreme Court opens door to suspect being extradited to China.

Tens of thousands of nurses will walk off the job tomorrow, after a pay offer from DHBs was “overwhelmingly” rejected by union members. Stuff reports the NZ Nurses Organisation ballot was held on the third pay offer made, and it was both the pay and the wider conditions that were considered insufficient by nurses. Staffing levels are considered particularly poor right now by nurses, leading to dangerous situations. The NZNO has agreed to provide enough staff to ensure safe levels of patient care during the strike – union organisers say this will ironically mean more staff rostered on than normal in some cases.

The sector is one that has seen plenty of industrial action in the last few years. Just last year primary healthcare workers (those who work at GP clinics and such) went on strike for pay parity with DHB nurses. And in 2018, DHB and hospital nurses went on strike before eventually accepting the fifth pay offer made. At the time, there was a lingering sense of unfinished business, with nurses not exactly thrilled with what they got.

But right now, nurses clearly believe they have both just cause and leverage to take industrial action. On this it’s worth looking at the simple rules of supply and demand – there aren’t enough nurses, and this is both an improvement being urged by the union, and an advantage in negotiations. For example Radio NZ reported recently on a GP clinic that hadn’t been able to recruit a practice nurse for a year, amid high rates of burnout in the sector. And globally there is a shortage of nurses, meaning employers are having to compete with better deals overseas. Plenty of New Zealand nurses are still moving to Australia, reports Newshub, citing both much more money and more manageable workloads.

A rather low-key virtual APEC meeting took place at the end of last week, with participating countries discussing the removal of trade barriers. Newsroom’s Sam Sachdeva reports there was an agreement to speed up vaccine exports, but no corresponding agreement was reached on tariff cuts on vaccines. The latter was understood to be a position the New Zealand government was pushing for, but it appears to have been scuppered by trade tensions between the US and China.

The Supreme Court has opened the door to a murder suspect being extradited to China, in the first such ruling of its kind. The Guardian’s Tess McClure reports the judgement did not involve a firm ruling on the matter of extradition – however it did conclude that a justice minister could choose to allow an extradition to go ahead, provided assurances of fair trial and treatment were provided by China. The case in question concerns Kyung Yup Kim, a Korean-born permanent resident of New Zealand, who is accused of killing a woman in Shanghai more than a decade ago. Kim denies the charge.

An enormous amount of ink has been spilled about problems in the National party recently. For an overview of the party’s rough last week, I’d recommend this long-read from Newsroom political editor Jo Moir, who gave a comprehensive overview of exactly what is known, and what is a matter for speculation, in both the Nick Smith and Jake Bezzant sagas.

It’s worth doing a quick roundup of what people connected to the party are saying about it all. Writing on the (paywalled) NZ Herald, commentator and previous leadership coup participant Matthew Hooton has put the blame on the man at the top – party president Peter Goodfellow – who has overall responsibility for candidate selection. Party member and Auckland Ratepayers Alliance campaign manager Monique Poirier wrote on the National-aligned Kiwiblog that the party must become much more rigorous on selections, and refocus it away from charismatic stars in favour of the more humble and grounded. Former party activist Liam Hehir wrote about toleration for and protection of abusive figures within organisations, including but not limited to political parties, on the Democracy Project. And someone not connected to National at all – Spinoff contributor Danyl Mclauchlan – has written about how perhaps the loss of key leadership lieutenants is the real reason National seems so rudderless now.

The Greens are refusing to return $54k in donations from someone convicted of animal abuse, despite strong party policies in this area, reports Newsroom. A party spokesperson said the two five-figure donations that made up the total had been run through the party’s ethics committee, and that the animal abuse only became known after the donations had been accepted. The money has since been spent on the election campaign. It isn’t necessarily unusual for parties to keep money given to them regardless of who the donor is – last year Act refused to return a donation from someone who’d made disturbing and threatening online comments against Muslims.

The chief advocate for the SkyPath across the Auckland Harbour bridge says a new plan for walking and cycling is “overkill”. Stuff spoke to former Skypath project director Bevan Woodward, who isn’t confident the new crossing can be completed within five years. He also doesn’t have faith in the ability of Waka Kotahi to deliver, and said the best approach would be to “liberate” one of the lanes for cyclists immediately. That’s not to mention the price tag on the second crossing, which is well into the hundreds of millions of dollars.

Meanwhile, the transport announcements on Friday also included the news that the controversial Mill Road project will not go ahead. Stuff reports it is one of six projects being axed, amid cost blowouts in the wider NZ Upgrade programme. The transport bloggers at Greater Auckland were not fans of Mill Road, and wrote late last year about how it could be rethought.

Right now on The Spinoff: Alex Casey reports on how cinemas have had to adapt everything they do amid the disruption of Covid. Oscar Zambuto writes about sending his musical idol a handwritten letter, and then managing to get an interview conducted entirely by hand. Michael Andrew went to a housing auction to check out anecdotal rumours of a cooling market. Linda Burgess writes about the uncomfortable trend of personifying and humanising dogs. And Olivia Sisson writes about the cooperative finding a use for the hundreds of thousands of olives that grow on public trees.

For a feature today, a look at how government policy is directly responsible for the near-extinction of the kea. Stuff’s Charlie O’Mannin has gone back into the archives on a programme in which bounty hunters were paid to slaughter kea, on the grounds that the highly intelligent birds were harassing sheep flocks. There were also lurid scare stories at the time of kea trying to eat people. Here’s an excerpt:

In 1884 the New York Times reported the kea “has acquired a taste for mutton, and refuses to eat anything else. Whenever a flock of kea discover a flock of sheep they fall upon the latter, loudly shrieking, ‘Polly wants some mutton,’ and, perching on the backs of the unhappy sheep, tear them to pieces”.

The articles only increased in salaciousness as time went on, with the Oregon Sunday Journal in 1914 reporting the kea as “A terrible man-eating parrot which devours human flesh with evident enjoyment”.

“At first dead sheep satisfied it, but later only live sheep would do. As the birds became stronger and bolder they learned to attack unprotected men who were unable to defend themselves. In this way they developed a taste for human flesh.”

In sport, some awards: Because a few Queen’s Birthday honours end up going to athletes I may as well put this bit of news here. The full list includes Sir Buck Shelford, but I particularly want to draw your attention to Dame Ruia Morrison, a Māori tennis legend who not only represented New Zealand with distinction at Wimbledon, but also spent the rest of her life giving back to the tennis community back home. I’d recommend going back and watching her episode of our web-series Scratched, about Aotearoa’s (previously) lost sporting legends.

And in the cricket, the Lords test petered out into a bit of a bore draw, but the Black Caps looked fairly good getting there. The NZ Herald’s (paywalled) Dylan Cleaver has a useful piece on what we can learn from the performance. I’m personally interested in the performance of you the reader with this test, and how long you lasted into the overnight broadcast before packing it in. Email any anecdotes to thebulletin@thespinoff.co.nz – warning, they may be read out on a podcast.