A giant of music and a pioneer of punk, Jonathan Richman doesn’t do digital. He has no mobile phone, no computer. So Oscar Zambuto sent him a letter.

Legendary Canadian DJ and music interviewer, Nardwuar the Human Serviette, dropped this wisdom in his 2011 Ted Talk. It’s advice which has always given me hope as a wannabe music journalist.

After I saw Nardwuar’s talk, it got me thinking: if I had the chance, who would I interview, if I could just ask? Big musical names of course sprung to mind – Kendrick Lamar, Kanye West, Bob Dylan. But then reality hit me. If I asked any big name for an interview, I would almost inevitably be turned down. After all, my musical journalism portfolio up until that point consisted of one measly 95bFM relief show, which I think, at the very most, 10 to 15 people would have listened to, two of whom would have been my parents. Besides, Nardwuar was describing his approach to music journalism in the late 80s and throughout the 90s, in a pre-internet music sphere – vastly different to today’s.

Then I thought of someone whose music and showmanship have often gone under the radar: Jonathan Richman. Unbeknownst to me, the first time I came across him was when I was about 12 and watched There’s Something About Mary, for which Richman was the musical narrator. Fast-forward to Christmas night, 2020, and I was in a Dunedin hostel (I was on a quintessential Kiwi road trip and, for some reason, thought it would be a good idea to spend Christmas in a spooky hostel that used to be a hospital). That night, a very irritating man from Birmingham was providing a cheery Christmas soundtrack with his snoring, so, in an effort to drown out the horrendous drone, I decided to check out my “Discover Weekly” playlist on Spotify.

The first song on the playlist was one of Jonathan Richman’s best-known songs – ‘I Was Dancing in the Lesbian Bar’. I was immediately hooked. I spent the next two weeks of my road trip listening to Jonathan Richman, and after a while, I had the answer to my hypothetical question: who would I interview if I could just ask? It had be Jonathan Richman. I didn’t know how, but that was a problem for another time.

Richman’s band, The Modern Lovers, remain one of the most influential of all time, pioneering punk and accelerating the genre’s growth in the late 70s and 80s. The Modern Lovers’ song ‘Roadrunner’ has been referred to as “the first punk song”, and its cultural influence is such that, for the last decade or so, the Massachusetts State legislature has been fighting to make the song the official rock song of Massachusetts. In addition, Richman’s solo career made him a staple on The Tonight Show with Conan O’Brien, performing comedic songs such as ‘You’re Crazy for Taking the Bus’ and ‘Vampire Girl’. Richman, to this day, prides himself on simplicity, performing unaccompanied with two microphones – one for him, and one for his guitar. Also, as I came to learn, Richman uses no modern technology whatsoever, refusing to use a mobile phone or computer.

Emails were soon flying into the digital ether. I first emailed Richman’s agency, who emailed his personal assistant, who emailed me with Richman’s PO Box address, to which I could mail him my hand-written questions. I had originally wanted to do a Zoom interview, but I was informed by his personal assistant that “unfortunately, even if he was agreeable to the idea of an interview, it’s not possible to do a quick one via Zoom or email … because Jonathan doesn’t use the internet, email etc. and has never owned a computer or cell phone”.

No wonder there are barely any Jonathan Richman interviews out there, I thought; he’s nearly impossible to contact. Nevertheless, in early March, I wrote him a letter with 10 questions attached, expecting never to hear back from him. I had largely forgotten about it and dismissed the possibility of receiving a reply. Then, two and a half months later, I received a thick envelope, with my address beautifully calligraphed by Richman himself, and all of my questions answered. I hope Nardwuar is proud – all I had to do was ask.

Here is the Q&A in its handwritten glory. Below, the interview is transcribed. Mysteriously, Richman’s own address label spells his name ‘Jonathon’, though in his own script below it’s ‘Jonathan’. 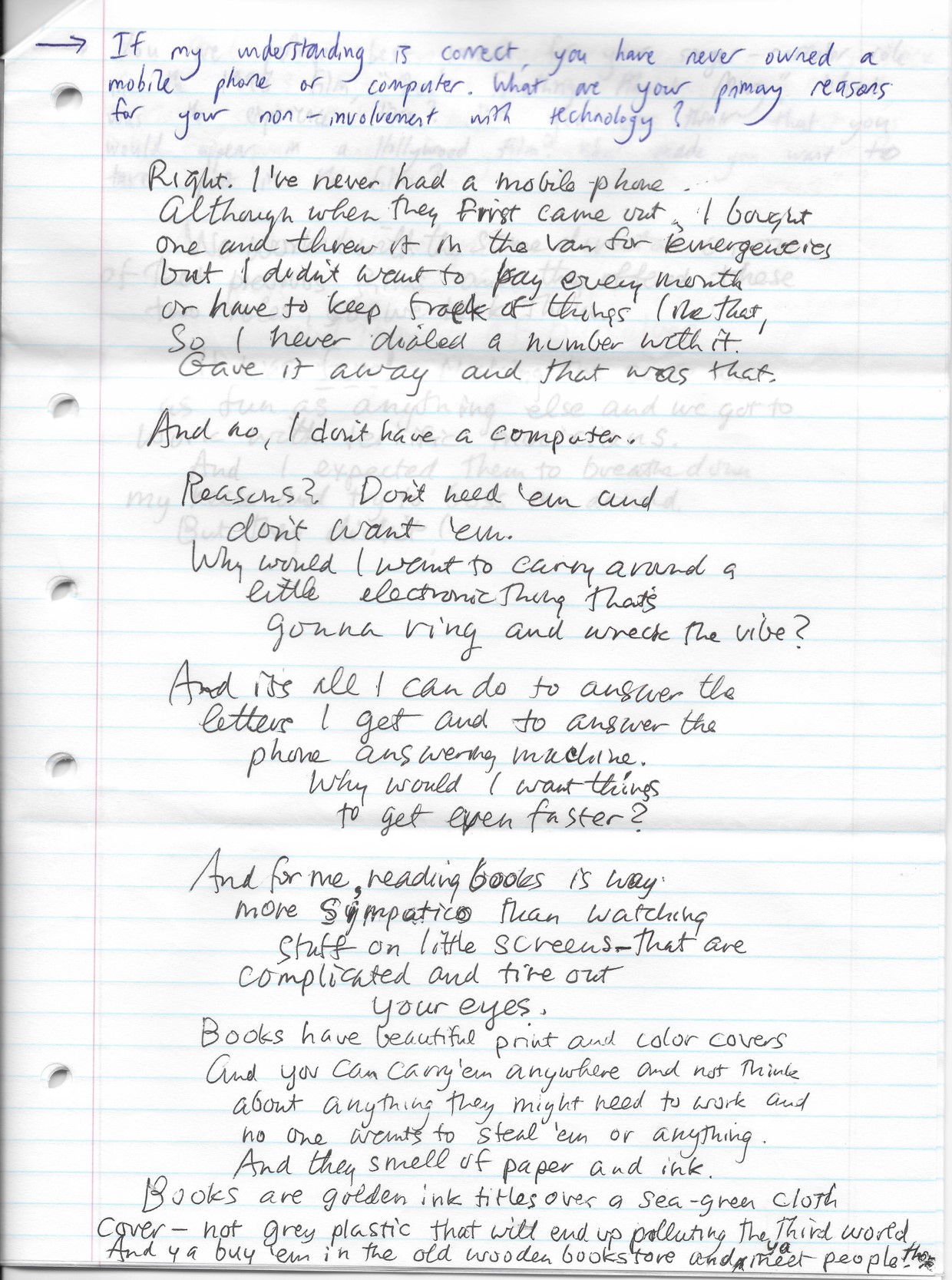 Oscar Zambuto: You claim that you became known “by copying the Velvet Underground”. Do you truly believe this?

Then I started copying (around three or four years later) Chuck Berry, Bo Diddley and Little Richard, Buddy Holly – (the bands I copied, copied these people.)

In the past, you have sung in a variety of languages, including French, Spanish, and Italian – my personal favourites are ‘Ahora Es Mejor’ and ‘Cosi Veloce’. You have even released a whole album in Spanish! What inspired you to sing and record songs in different languages?

Each language has a different cadence and they all rhyme in different ways. So, you end up being able to express your emotions differently in each one! What a fabulous occurrence this is, no? That we can, by checking out different languages, learn something more about our own feelings!

Also, when you learn other languages, you really appreciate your native tongue in a whole new way.

For the past 10 years or so I’ve started singing it more like this:

That Summer Feeling… is here again.

Your stage presence, at least in the early days, came across as half-musical, half-comedic. Was this intentional? Do you think it’s important for your music to have a comedic element?

I’m just like that. Sometimes I can be funny. Not always.

But you don’t have to think about things like this: you don’t go: “Oh, I think I’ll combine comedy in with music.”

You just play and what happens happens.

One of my favourite songs of yours is ‘Twilight in Boston’. What can we learn about ourselves by having, what you call, “lonely walks” around our hometown?

You know… I’ve been thinking about that piece lately. I’m glad it has an effect on people.

I don’t think I have to tell you what can be gained by a walk all alone, do I?

If my understanding is correct, you have never owned a mobile phone or computer. What are your primary reasons for your non-involvement with technology?

Right. I’ve never had a mobile phone. Although when they came out, I bought one and threw it in the van for emergencies but I didn’t want to pay every month or have to keep track of things like that, so I never dialed a number with it. Gave it away and that was that.

And no, I don’t have a computer.

Reasons? Don’t need ’em and don’t want ’em. Why would I want to carry around a little electronic thing that’s gonna ring and wreck the vibe?

And it’s all I can do to answer the letters I get and to answer the phone answering machine. Why would I want things to get even faster?

And for me, reading books is way more simpatico than watching stuff on little screens – that are complicated and tire out your eyes.

Books have beautiful print and color covers and you can carry ’em anywhere and not think about anything they might need to work and no one wants to steal ’em or anything. And they smell of paper and ink. Books are golden ink titles over a sea-green cloth cover – not grey plastic that will end up polluting the third world. And ya buy ’em in the old wooden bookstore and ya meet people there.

You are perhaps best known for your singer-narrator role in the 1998 film, There’s Something About Mary. What was the experience like? Did you ever think that you would appear in a Hollywood film? What made you want to take part in the film?

We worked with the same directors on one of their previous films and they offered those two roles, so we took them.

It was fun! Making the score was as fun as anything else and we got to work with terrific musicians. And I expected them to breathe down my neck and try to boss me around. But they didn’t!

The Modern Lovers’ song, ‘Roadrunner’, appears on the soundtrack of the 2003 film, School of Rock. Director, Richard Linklater, said that he included it because he views it as “the first punk song”. Do you agree with his assessment? Do you view the Modern Lovers as “punk pioneers”?

No. When we were playing we were just a rock band, and thought of ourselves as only that.

On 15 June 1997, according to MTV, you played a one-off show at the Luna bar in downtown Auckland, New Zealand. You were supported by the legendary Kiwi musician, Chris Knox. According to the MTV article, you got agitated at the bartenders who were “making too much noise clanging the bottles”, to whom you yelled, “I don’t yell in your ear while you’re working!” Do you recall the show, or does each show blend into the next?

(They don’t blend into the next; but I don’t remember all.) Don’t recall but it sounds like something I might have done.

What are your thoughts on the music scene today? Do you have any advice for young musicians?

I think the same principle applies now as applied then: Sing what you feel, and don’t sing what you don’t feel. – Jonathan