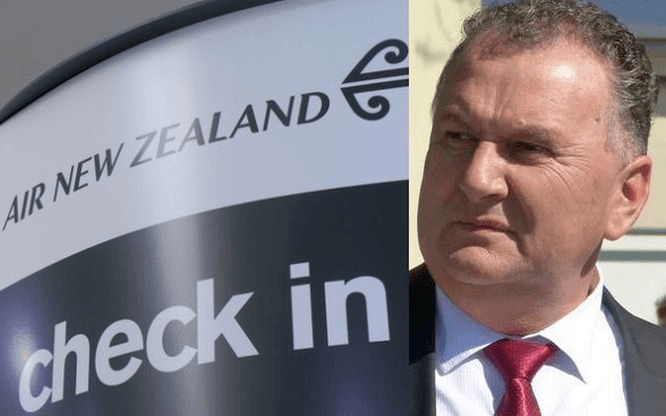 The Bulletin: Tensions take off between Air NZ, government

Good morning, and welcome to The Bulletin. In today’s edition: Finance Minister considers influencing Air NZ through board appointments, Plunket volunteers might walk out, and everyone’s favourite former President is in town.

Air New Zealand has complained to finance minister Grant Robertson, over attacks by regional economic development minister Shane Jones, reports the NZ Herald. But the complaints don’t appear to have had much impact. This morning, Radio NZ is reporting that Mr Robertson is floating the possibility of influencing Air New Zealand’s decisions through board appointments.

Shane Jones says Air New Zealand is treating the regions badly by pulling out of smaller centres, and disrupting his development plans. Winston Peters is also raising concerns, saying the airline is not “looking at New Zealand’s interests across the country,” reports Stuff.

While Air New Zealand is defending their right to operate independently of Crown control, they have been pulling flights away from some regions. Kāpiti is the latest, but across this decade the national carrier has stopped flying to Kaitaia, Masterton, Oamaru, Wanaka, Westport, Whakatane and Whanganui (combined population about 135,000, depending on how you slice it) In February, Air New Zealand posted a half year profit of $232 million dollars.

Plunket volunteers might walk out over money raised by communities being requisitioned by head office. Pirongia Plunket volunteer Ruth Webb called into Newstalk ZB talkback to express her anger at the lack of consultation and communication from central leaders. Ms Webb said most of the Pirongia volunteers are now gone. It follows on from the story being broken by One News political reporter Andrea Vance.

Former US President Barack Obama is in the country, so expect to see lots of coverage of the visit despite an extensive media ban. Air New Zealand is hosting the visit, which includes chef Peter Gordon being flown in from London to cook for Mr Obama, reports the NZ Herald. You’ll probably hear a lot more about the ‘bromance’ between Mr Obama and John Key, a la this Stuff story.

And just to really make you think we’re back in 2014, Kim Dotcom has weighed in. He’s launched a legal bid to get Mr Obama to answer questions on whether the White House was involved in directing actions against Mr Dotcom.

Today’s a big day for the dairy farming industry, with Fonterra and Synlait to announce their interim financial results. The NBR reports that both companies shares fell yesterday ahead of the announcements. In this morning’s global dairy auction, the whole milk powder price was up slightly.

Medicinal cannabis users are too afraid of the Police to make a submission to Parliament, reports Newshub. Submissions on an amendment to the Misuse of Drugs Act close today, and advocate Shane Le Brun says he’s struggled to get users to speak out, particularly if they grow for personal use.

A domestic violence pilot programme has drawn up thousands of safety plans, but offered little in the way of practical help, Radio NZ reports. The story describes an expensive bureaucratic cluster in which only 2% of almost 10,000 ‘family safety plans’ resulted in an intervention.

Right now on The Spinoff: Alex Casey and Noelle McCarthy have published their long investigation into the culture of Pavement magazine, with three women going on the record about their experiences of sexual harassment and misconduct by those who ran the magazine. Guest writer Dr Jess Berentson-Shaw painstakingly lays out exactly why Mark Richardson’s comments about motherhood not being a job are so idiotic. And A Mother writes about leaving her drug addicted partner.

Today for features, Spinoff music editor Henry Oliver has picked out some essential reads on where music is at right now.

As the music industry continues to evolve in the digital age, it’s arguable that with more music more readily available than ever, music journalism is as important as it’s ever been, giving context to he open fire hydrant of music being released into the world at any given second.

Right now, the must-read piece is the New York Times‘ ‘25 Songs That Tell Us Where Music Is Going‘, a beautifully executed multi-media experience in which 25 writers chose a song each and tell you, as the title suggests, why it’s a sign of the future of music.

Not included on that list, but certainly a sign of rap music’s globalised present (and perhaps it’s future) is Rich Brian, an 18-year-old Indonesian rapper, who was recently profiled on Pitchfork by Jace Clayton (aka DJ Rupture), one of the best contemporary writers on how music moves around the globe.

Speaking of how music moves, if you want to support music makers more directly than the infinitesimal amount of money an artist receives everytime you play their song, a good place to start is this article by musician and writer Damon Krukowski about how to be a ‘responsible music fan’ in the age of streaming.

Closer to home, last weekend, Spinoff staff writer Madeleine Chapman attended an eight-hour performance of Max Richter’s Sleep, leading her to question her own relationship with sleep and tiredness: “I used to think being tired meant being sleepy. I thought being tired meant being physically exhausted. In reality, being tired isn’t a feeling or an emotion, it’s a state of being.”

And, finally, and also for The Spinoff, Elle Hunt dissected the ways Lorde and Jack Antinoff have changed pop music, both musically and culturally. Enjoy!

In sport, former All Black and Samoa representative Dylan Mika has died of a suspected heart attack at age 45, reports Rugby Pass. He and his wife Tracy have a daughter. Mika stayed involved with rugby after his retirement, and NZ Rugby boss Steve Tew has described him as a “rare talent.”