A scathing review has outlined how the budget blew out for major Wellington road Transmission Gully. As Stuff’s Thomas Coughlan reports, the contract was put out at an unrealistically low price in the first place, and that key errors were made when in 2012 the National government decided to change it from a public works project to a public-private partnership. The details of the story reveal some remarkable moments of magical thinking on the part of those involved, for example, see this paragraph:

Setting the tender price so low meant firms were tendering for a project knowing that it was unrealistic to be able to deliver it at that cost. The review noted that setting the price low essentially “double counted” cost savings because the public sector figure was already required to consider the most efficient and cost-effective way of doing things.

That has put those who were around in the previous government on the back foot. National’s transport spokesperson Michael Woodhouse said “the report makes some quite outrageous comments that imply that the contractors were forced into signing up to a contract” – in other words, if they didn’t like it, they shouldn’t have signed on, reports Radio NZ. He also took something of an ‘all’s well that ends well’ view of it, saying Transmission Gully will actually soon be finished and open. The road is being delivered behind schedule, but in fairness that schedule included an earthquake, which made delays inevitable.

What does it mean for the future of massive projects like this? Infrastructure NZ put out a release noting the criticisms, but defending the concept of PPP’s as being useful. “New Zealand has a very large nation-building investment programme ahead. Use of private capital to manage public cashflows, inject innovation, attract international expertise and better allocate risk is critical to successful delivery,” said INZ policy director Hamish Glenn. But I think it’s also worth looking back at this piece on The Spinoff from last year by Matt Lowrie, which argued that Transmission Gully showed how dangerous PPPs could be. A key line: “With interest rates at record lows and much of the risk still sitting with the government, it’s hard to see what value PPPs bring – other than delivering good returns to private financiers.”

A new Covid case has emerged in the community, but as yet there’s no sense that it will lead to lockdowns, or the suspension of the trans-Tasman bubble. Our live updates reports the person has been vaccinated, and works at the airport cleaning planes. “We know the Pfizer vaccine is highly effective, but at 95% effectiveness a small number may not be protected,” said the health ministry in a statement. Genome sequencing results are expected today. Three new locations of interest around Auckland have been added.

Health ministers Andrew Little and Peeni Henare will be making major announcements this morning about implementing health system reforms. Unfortunately for this publication, they’ll be made at 8.00am. It is expected that they’ll largely be in line with the recommendations of the Simpson review, including cuts to the number of DHBs, a reshuffle of the health ministry’s responsibilities, and the establishment of a Māori Health Authority.

You’d expect plenty of DHB members would have something to say about all this, but they’re going to find it difficult to speak out.Stuff’s Cate  Broughton reported yesterday that a new Code of Conduct from the State Services Commission effectively bans them from making political comments in public, which one expert quoted in the story believes could be used to prevent criticism of the reforms. Personally, I’m not totally convinced that DHBs should exist at all, let alone have elected members, but if they are going to be there it’s hard to understand any justification for gagging people who have been democratically elected.

The government has been rapped over the knuckles by the Auditor-General over the Ihumātao purchase process. As Radio NZ reports, the AG said the process errors mean the purchase is unlawful “until it has been validated by parliament”. That isn’t a particularly high bar for the government to clear, given the majority they currently have. Even so, it appears to be fairly sloppy – not that the PM would agree with that assessment, after defending the process yesterday.

Labour has continued with their authoritarian position on the party hopping (also known as waka-jumping) legislation, but are now open and enthusiastic about it. Stuff reports they will vote against an attempt to repeal the legislation, which originally came about because NZ First leader Winston Peters demanded it. The law concentrates political power in the hands of party elites, hence why I’ve described it as authoritarian. Labour MP Ginny Anderson, who chairs the Justice Select Committee, said the group had decided that maintaining the proportionality of parliament was the most important consideration.

A cafe owner has made a dramatic court appearance, over refusing to display a Covid QR code. Kim Baker-Wilson reports for One News reports that it is the first such case of its kind. Dilip Rupa of Auckland questioned whether the court had the authority to try his case, and said that it was in fact a constitutional matter, before being taken away by security. The story includes a long list of incidents building up to the courtroom climax. 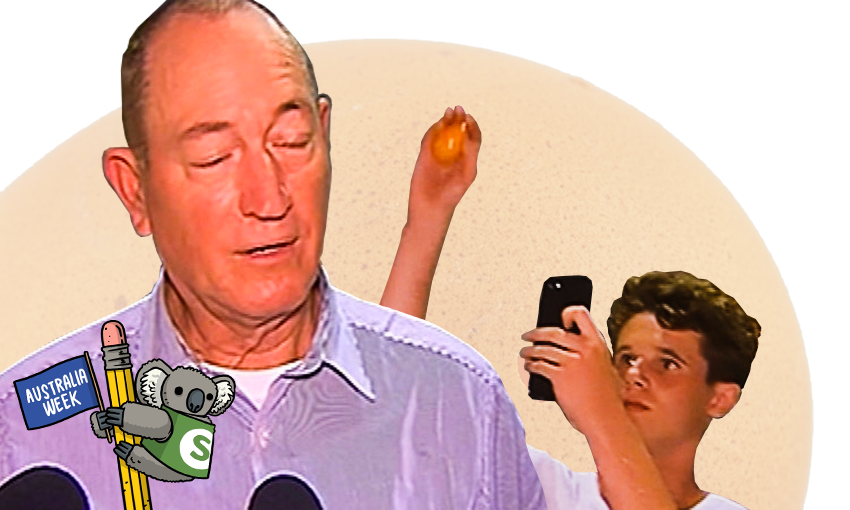 Right now on The Spinoff: Michael Andrew went to Westport to get a deeper sense of the new economy developing under the surface of the West Coast. Justin Latif reports on the lack of diversity in the senior leadership of Auckland Transport. The Single Object looks at the remarkable embroidery work of Lema Shamamba, who fled DR Congo because of violence fuelled by the resource demands of major tech companies. Frankie Bennett writes about the first court case to declare that the secret removal of a condom during sex constitutes rape, and how that terminology needs to be used openly. Mirjam Guesgen explains what is going on with vaccines and blood clots, and how likely those side effects are.

And continuing with Australia Week: Tara Ward watches TV as the trans-Tasman bubble opened up, and caught the many remarkable moments that happened live. And Alex Casey interviews Egg Boy, the teenager who went viral for cracking an egg on the head of a fascist politician.

For a feature today, a depressing read about the reality of Afghanistan’s post-war future. With the long-running occupation by coalition forces ending in withdrawal and entirely predictable defeat, the country will soon revert back into effective Taliban control, reports the Asia Sentinel. And all of the deaths and destruction that took place will largely be for nothing. Here’s an excerpt:

The fact that information trashing democracy is being produced and shared across Afghanistan at a time when the US forces are ready to pack up speaks volumes about the Taliban’s plan to launch an ideologically motivated political battle vis-à-vis the regime in Kabul.

In fact, this battle has already been launched to a significant extent. An April 18 report published by the group on its website boasts that hundreds of Kabul employees have already joined: “Over the course of the month of March 2021, the efforts of Preaching, Guidance and Recruitment Commission of Islamic Emirate in all provinces of the country resulted in 1,062 personnel working in various posts of the Kabul based administration left the corrupt regime and joined up with the Islamic Emirate.”

Moana Pasifika will be largely made up of Pacific Island players, rather than just being another New Zealand Super Rugby team, reports Newshub. That means not just heritage, but international eligibility, with the new side targeting 80% of the squad being able to play for Tonga, Sāmoa or Fiji. Having said that, there could also be a couple of current or former All Blacks who get signed as foundational players, ahead of the debut season next year. No signings have yet been announced.

And for those following the European Super League concept, some significant developments have happened overnight. Chelsea and Man City have both pulled the pin, and it looks like the whole thing is going to hilariously collapse just days after being announced. We’ll have more on this tomorrow.