Australia Week: The first day of the travel bubble was big news, so Tara Ward stayed home and watched it happen on the television.

The trans-Tasman travel bubble kicked off early on Monday morning, and our breakfast news shows were in the mood to celebrate. If you like airports, yesterday was all your dreams come true, and if you like worrying that your neck skin is aging prematurely from looking down at your phone all day, then you were also in luck. Breakfast and The AM Show continue to bring us the highs and lows of life, and I love them for it. The TV lords giveth by opening the borders, and then they taketh away by making us bring our jowls with us.

Thousands of passengers were scheduled to cross the Tasman yesterday, and as the global Covid-19 death toll hit three million, our breakfast shows knew we were doing something special. Yes, other countries can watch planes on the news, but can they watch people waiting to get on a plane, on the news? Seems unlikely. The first flight left Wellington for Sydney at 6.05am, and reporters in airports on either side of the Tasman were ready to capture the vibe. Nothing much was happening, people were just standing in line, but the potential was huge. They spoke to emotional New Zealanders travelling to meet new grandchildren or reunite after family tragedies, but nobody was more thrilled to be standing in an airport than Newshub BFFs Lisette Reymer and Emma Cropper, who could have soared across the ocean on their own giddy winds of jubilation. 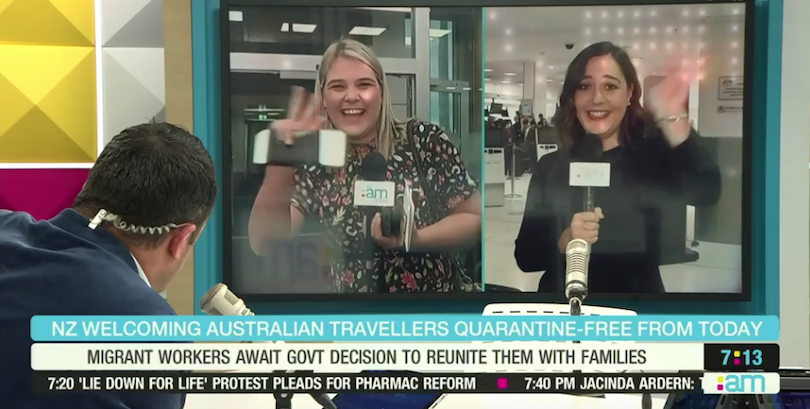 Flying into happiness (Screengrab: The AM Show)

After Breakfast’s John Campbell finished spewing over John Farnham’s unwelcome invasion of his ear holes (“close the bubble, we don’t want you here Johnny Farnham!”), the prime minister popped in on her Monday media round. Jacinda Ardern revealed she grew up on the same street as weather presenter Renee Wright, and that Jenny-May Clarkson was in the police force at the same time as Ardern’s dad. It was a sweet reminder that New Zealand is a small place. Thank goodness the bubble is opening so we can all meet some more people. 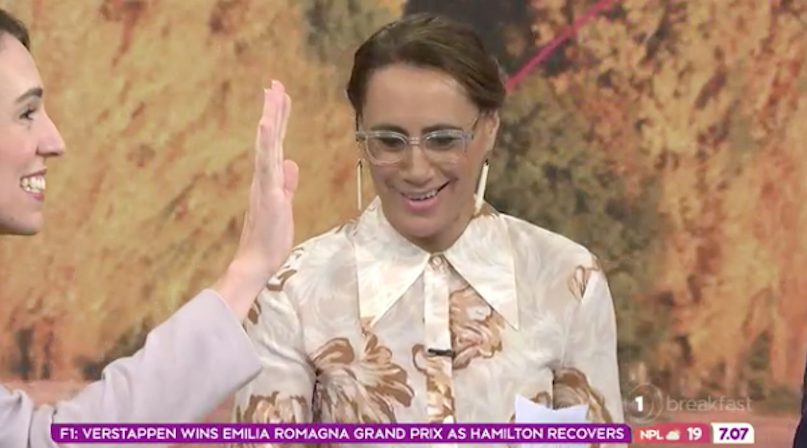 Over on The AM Show, an unusually upbeat Mark Richardson was embracing the bubble by trying to establish a sister city relationship with his favourite surf park in Melbourne. He asked the prime minister to help, but Ardern refused, claiming there were “rules” about that sort of thing. Prime minister, please. Was it rules that got us this travel bubble? Was it rules that got me these saggy jowls? “You’ll have to do it on your own merits,” Ardern told Mark. “Good luck. You’ll need to smile.” Going well so far (Screengrab: The AM Show)

We didn’t see a single plane land in either country that morning, but it was a different story by six o’clock, when the evening news bulletins showed planes being welcomed around the country like they’d just arrived from space. One flight landed in Queenstown to a ceremonial water salute, its jubilant passengers bouncing through the arrival gates, cheering and raising their arms in triumph. Elsewhere, choirs sang and drag queens waved signs, while Melbourne welcomed us with bubble-inspired interpretive dance. It was like the opening ceremony of the airport Olympics, and everyone was getting a gold medal. Pass me the tissues (Screengrab: TVNZ)

“Grab your tissues,” Newshub’s Sam Hayes advised, but it was too late. Tears slid down my chins as Newshub showed emotional families reuniting after too many months apart, and although I didn’t know these people, I ugly-cried like they were the fruit of my own loins. I’m even sure I saw One News’s Simon Dallow well up, though that was probably just the blinding force of those interpretive bubble dancers. 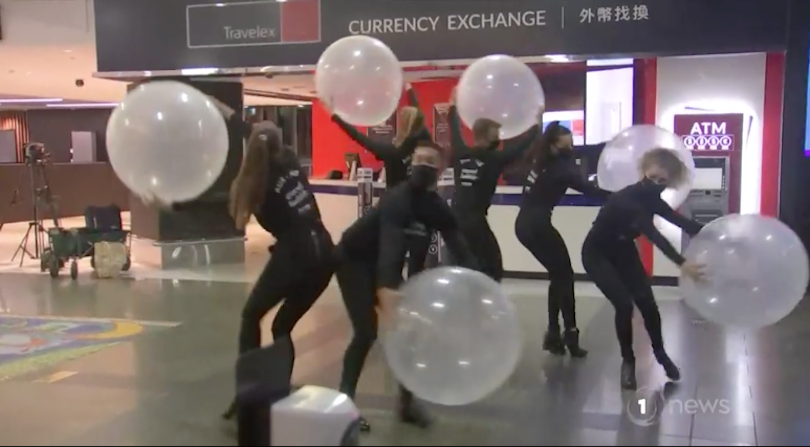 I also cried on behalf of One News reporter Andrew Macfarlane, who had been at Sydney Airport since before 6am and somehow looked as fresh at 6pm as he did 12 hours earlier. Tell us your secrets, immediately. The tears carried through to Seven Sharp and The Project, who showered us in more emotional stories about families coming together. This was the essential travel we’d been waiting for, and after a year of Covid-19 shitting all over the planet, it was the most heartwarming news bulletin you’ll ever see.